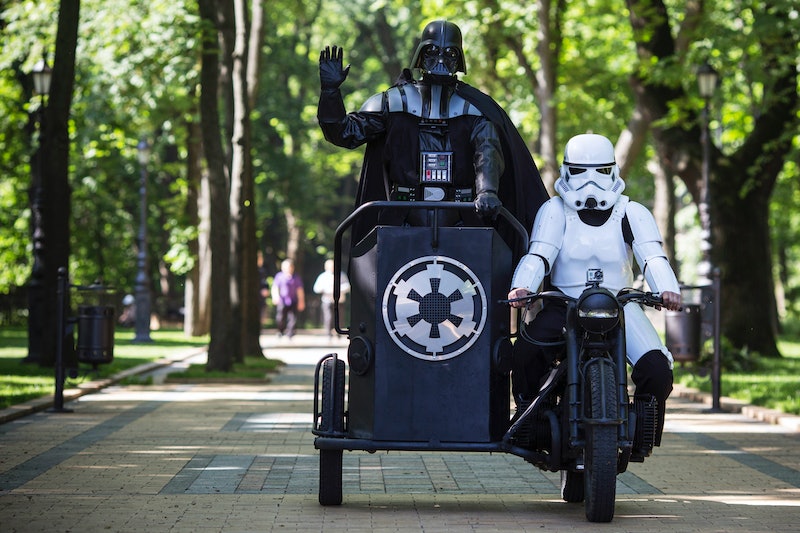 May 4 is a particularly important day for Star Wars fans, especially with many of them eagerly awaiting the Dec. 18 release of The Force Awakens, a continuation of the Star Wars series that feels far closer than an election that's still a full year away. "May the 4th," aka "Star Wars Day," takes its name from the iconic quote, "May the force be with you," and with Ben Carson having announced his presidential run the day before and Carly Fiorina expected to announce her candidacy Monday, the two Republican hopefuls are likely hoping the quote adds extra oomph to their presidential announcements as chatter about them builds Monday.

Now, there are two Democrat candidates and four Republican candidates who've thrown their hats into the proverbial 2016 presidential ring. They're all similar in their own ways to Star Wars characters. In fact, many of their names came up in Star Wars-related political conversations during the 2008 election. A 2014 combing of data from FiveThirtyEight's poll of the country's favorite Star Wars characters and political approval numbers showed Luke Skywalker as the clear winner, if he'd only just announce already. Star Wars and politics go together like Luke and Leia. To prove it, we've paired presidential candidates from Marco Rubio to Bernie Sanders with their Star Wars counterparts, proving that the far-off galaxy isn't as distant as you'd think.

Rand Paul and Darth Vader have a lot of the same baggage, though Vader would probably be more of a big government man than Paul. Acting primarily on the basis of blind ideology (Sith or Jedi? Conservative or Libertarian?) without regard to real world consequences, the two make strong decisions from the heart and seriously want to shake up the landscape around them.

Divorce yourself for a minute from the fact that in Star Wars-politics matching, Rubio would essentially be the son of Paul. You think Paul/Vader has some strong views? Check out the headstrong high hopes of Rubio/Skywalker. Rubio is the ultimate conservative candidate and embodies the type of fresh hopes traditional Republicans rarely see in candidates who've steadily worked their way up the political ladder. Skywalker's back-story and Jedi drive is ultimately what propels him forward. Rubio is certainly guilty of drawing heavily on his parents' history as a means to strengthen his platform. Although Rubio comes from humble beginnings, he never had to worry about a moisture farm at least.

Many call Hillary Clinton and Han Solo opportunists, and is that really such a bad thing? The two share grand desires to better themselves and the greater good through strong leadership. They recognize the mercenary duties of their jobs and relish them. While Solo is initially enticed by the promise of a handsome smuggler's reward, it is the larger role as Commander of the Rebel Alliance that truly solidified his legacy. Likewise, Clinton has pivoted from the humble role of first lady to Senator then Secretary of State. She sets her hopes on conquering the White House next.

A long political career, Bernie Sanders has. He's seen a lot in his 34 years. It's Sanders' candor and sagacity that makes him a viable candidate despite his age. Yoda is centuries older but revered in similar ways for his kernels of truth and expert judge of character. He acts as the moral compass in an otherwise highly frenetic galaxy — a plane of existence that's eerily similar to the strife of American politics.

I'd hate to call Ted Cruz's supporters Ewoks, but the description is certainly fitting given Cruz's overt support of the little guy. Cruz as C-3PO is only logical, of course. It's up to Cruz to make sense of the far reaches of Tea Party and their fringe desires and translate that into a political movement as C-3PO plays constant translator to R2D2, Jabba the Hut, and many misunderstood characters.

There is possibly no better of a Star Wars-politics connection than former HP exec and potential presidential hopeful Carly Fiorina and Lando Calrissian. Both are enterprising business people gambling in high stakes atmospheres (Lando a bit more literally) where every decision is critical. Sure, Fiorina's decisions never led to someone being frozen in carbonite, but her shaky business acumen contributed to a very rough period for HP. Can Fiorina turn things around in politics and live happily ever after like Lando?

Ben Carson is a fiery force in the Republican party, known for his oratory skills and expert analysis. Surprisingly, that's never translated into a public office position. His impending announcement as 2016 presidential candidate might change that. Likewise, Boba Fett is a quintessential presence. His bounty hunting skills are bar none, and the few lines he does utter gets even the Dark Lord's attention. It's the unpredictability of a seriously fresh candidate like Carson and Fett's utter resilience that make the two like peas in a pod.