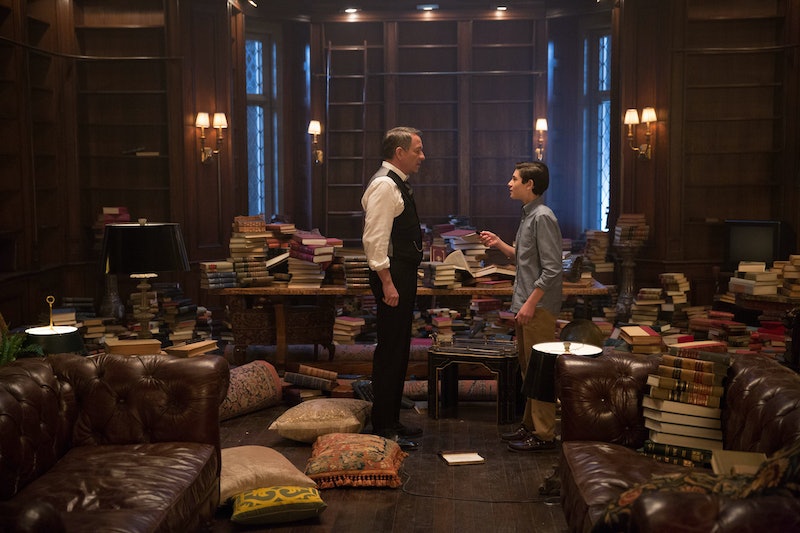 Gotham came to television with a hefty legacy to live up to and bajillions of Batman fan boys and girls to please. The first season has been somewhat uneven because of that — high expectations are not always your friend. But as the show roars into its first act finale, I think Gotham has hit a nice pace and established a friendly relationship between honoring DC canon and taking a little poetic license. Previews tease a violent clash of the city's power players in the Gotham Season 1 finale "All Happy Families Are Alike." So it's likely that the audience will be thrown into an even darker Gotham when the show's second season kicks off. But when exactly will Gotham Season 2 premiere? [UPDATE: Deadline reports Gotham will return Sep. 21.]

The premiere date of Season 2 hasn't been confirmed yet, nor has the amount of episodes. Gotham was rewarded with a comfy, early renewal by Fox back in January. As for Season 1, the network initially requested 16 episodes, but extended that order by six after the show had only been on the air about a month. That vote of confidence can sometimes be a burden; filler episodes are easy to spot, especially for a TV junkie like yours truly. But Gotham utilized the extra time quite nicely, finally giving Edward Nygma something sinister to do and introducing uncomfortably hot serial killer Jason Lennon. My guess is that Gotham will be back in the fall, being a reliable drama for Fox to program around and leaving time for what I expect will be a full-season slate of story.

What will Season 2 of Gotham bring when it does return? Here's what we know so far, plus a healthy amount of guesswork.

The Joker Will Be Born

Executive Producer Bruno Heller told ComicBook.com that the origins of The Joker would make up a big portion of early Season 2. With so many iconic portrayals from the past — including the late Heath Ledger's Oscar-winning performance — you might say there's a lot riding on this reveal. Heller was tight-lipped on whether Cameron Monaghan's Season 1 character Jerome will grow up to terrorize Gotham with a smile, but he's a popular candidate in fan theory.

Screenrant reported on producer John Stephens's comments in the Gotham panel at WonderCon, where he confirmed that Clayface and Mad Hatter were villains he was looking forward to exploring in the next phase of the show. Clayface is an adaptable baddie — he's held several identities across DC stories — so Gotham has plenty of room to play. Mad Hatter is more consistent, though I can't wait to see how the show puts his mind-bending capabilities to work.

Stephens also mentioned another classic Batman foe at the panel, who his colleague Danny Cannon has been itching to write for since San Diego Comic-Con last summer. Pressure is on for the Gotham writers to give fans a Mr. Freeze who's several shades less ludicrous than Arnold Schwarzenegger's deeply misguided ice-blue nightmare in 1997's Batman & Robin. I know, I shouldn't have even brought it up. I'm sorry.

Despite Jada Pinkett Smith's insistence that she's out after her one-year contract expires, Heller is hopeful that Gotham hasn't seen the last of Fish Mooney. "Nobody dies forever in the DC universe," he told Segment Next. (Though, will she die? I'm not so sure.) Maybe a Fish comeback is wishful thinking, but a little wishful thinking never hurt anybody.

Bruce Will Take A Step Towards The Bat Suit

With the introduction of Lucius Fox and the reveal of some Wayne family secrets in "The Anvil or the Hammer," Bruce is already that much closer to donning the armor. I believe the Season 1 finale will satisfy us with a little hint of the hero-in-training, but Season 2 will up that ante significantly. Also at WonderCon, Stephens teased that next season would see the "emergence of the character billionaire Bruce Wayne." Hopefully that means that Bruce will lose some of that naiveté that's been frustrating me all season. I'm ready for a savvier hero, even if he's still navigating puberty.