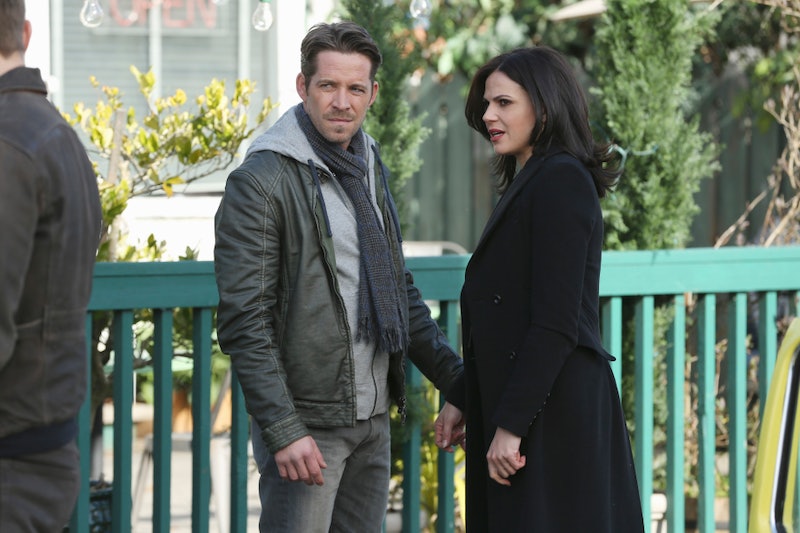 It turns out that Regina really didn't need The Author to get her happy ending after all. After spending most of its fourth season tracking down the storybook's author so she could rewrite her story, Regina got her happy ending on Once Upon a Time without any magical intervention. So, clearly, the Evil Queen has changed for good. On Sunday night's episode, Regina revealed that the happy ending she'd always wanted wasn't for Robin Hood to be in love with her (even though that's such an added bonus), it was to belong to this world and made a powerful statement about happy endings.

Obviously, no one would've blamed Regina if she'd gone through with writing Zelena out of the story for good, but it truly says something about who she's become that she decided not to. Last Sunday, Zelena revealed that she was pregnant with Robin Hood's baby, thinking that she'd finally succeeded in destroying Regina's resolve to be good and her chance at a happy ending for good. So, yes, I totally believed Regina wasn't going to hold anything back when she finally got ahold of that magic ink and The Author. And then she didn't.

Regina realized, after many painful flashbacks of her life with Cora, that she already had her happy ending — she'd finally found security in herself and in her place in her world all on her own. So, she told The Author to do nothing when it came to Zelena's fate and instead assured her sister that her revenge would be far worse than being written out of the story. Regina also told Zelena that her happy ending wasn't having Robin Hood to herself — even though she's got him anyway — it was having her place in the world and being lucky enough to have him be a part of it.

So, rather than rest on the classic definition of a Disney happy ending, OUAT took it one step further. Having her true love wasn't the most important thing to achieving happiness for Regina, it was finally figuring out who she was and where she belonged. Her happiness didn't need Robin Hood to survive, it needed soul-searching and that's exactly what she achieved by the end of Sunday's trip down memory lane. And, if this sticks, it seems like we'll be looking at a rehabilitated Evil Queen in OUATSeason 5.

More like this
The Time Traveler’s Wife Book Has A Heartbreaking Ending
By K.W. Colyard
Twitter Got *Very* Emotional Over 'The Split’s “Perfect” Finale
By Sam Ramsden
What Happened To The Real Sean Suiter From We Own This City?
By Kadin Burnett
Everything To Know About A Million Little Things' Reported Final Season
By Brad Witter
Get Even More From Bustle — Sign Up For The Newsletter