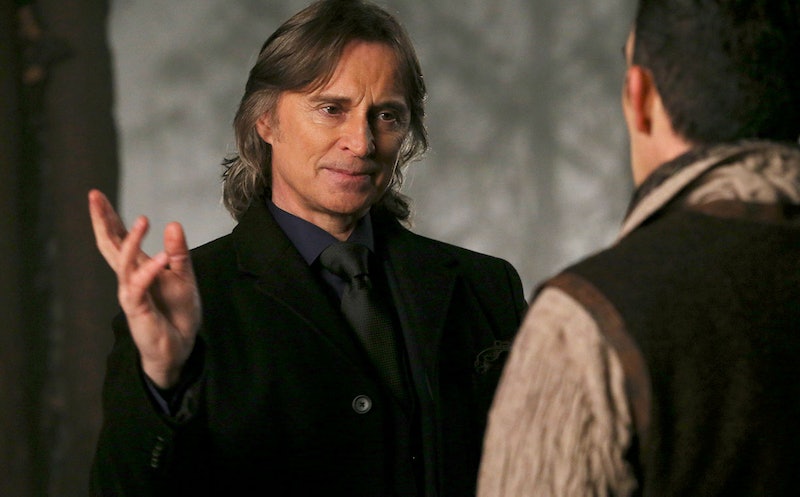 After a two-week hiatus, Once Upon a Time returned Sunday with a brand new episode, “Heart of Gold,” and let's just say, things got intense. Not only was the episode packed full with our favorite bandit Robin Hood, things took a wicked turn when it was revealed that Zelena has been posing as Marian this WHOLE time. I mean, not to say I told you so, but I totally saw this one coming.

To make matters more complicated, the revelation that Marian is actually the Wicked Witch in disguise means that Zelena has once again succeeded in ruining her half-sister, Regina's life. The only reason Robin Hood let Regina go in the first place was because he believed he was doing the honorable thing. Crushed by the news, that her true love is actually in the hands of her greatest enemy, Rumplestiltskin gives Regina an ultimatum — take a walk on the dark side once more or say goodbye to Robin Hood forever.

Now that Rumple has the author at his bidding, things are starting to look pretty dark for Storybrooke. As the villains get one step closer to rewriting their stories, I can't help but wonder, what exactly do their happy endings entail anyway? Here are a few predictions.

Out of all the villains, this sea witch is the only one who has successfully gained her happy ending. Aside from getting her singing voice back, she was reunited with her estranged father Poseidon.

This pirate has already made it apparent what his happy ending entails. It's not a story, but more so a person — Emma. He's faced great loss in his day, and he just wants the assurance that he won't lose Emma as well.

Now that she knows her daughter Lily is alive and in this world, her next step is finding her. And just as it was with Snow White and Prince Charming, she really just wants to have a relationship with her.

I think Regina's happy ending is much more than just being with Robin Hood. I think it is about finding true love in general. Throughout her life, she has faced many heartbreaks (Daniel's death, her mother's control) I think she just wants someone she can give her whole heart to willingly.

I honestly don't believe the only thing Rumple wants is Belle. While he may be a villain this season, I still believe there is some good left in his darkened heart. Maybe his happy ending involves vanquishing the dagger and his role as the Dark One for good.

The Wicked Witch's happy ending might be the most complicated of all. One of the reasons Zelena is so envious of Regina is that she feels she got everything — including a mother. Since there are rumors that Barbara Hershey is returning to the show, perhaps Zelena's happy ending involves bring Cora back from the dead.