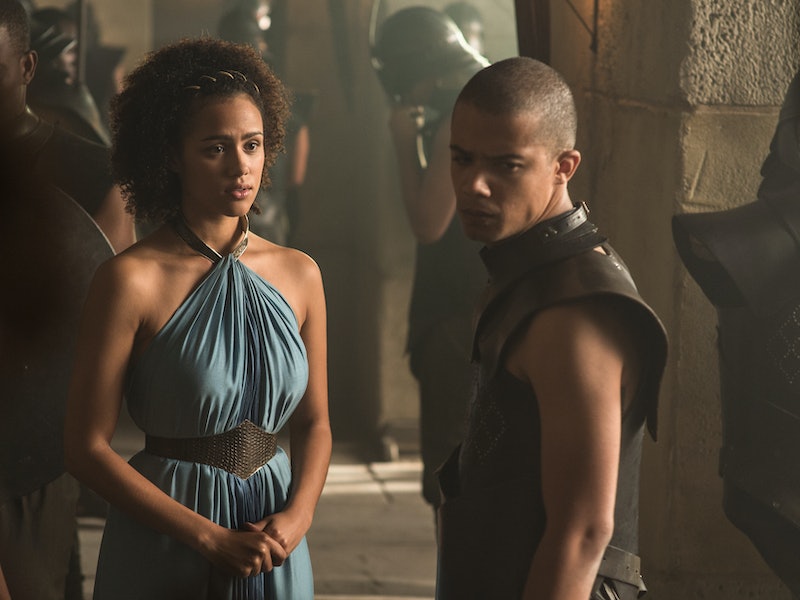 We had to know this was coming. Game of Thrones wasn't going to just introduce a murderous band of men in gold masks and deliver us a Khaleesi/Mhysa/Daenerys under fire without delivering (after all, the show has strung us along on a slow moving Dany story for seasons now and we deserve some forward motion). And deliver it did: At the end of the aptly titled episode "Sons of the Harpy" Grey Worm appears to die in a battle with the masked men after putting an inhumanly valiant fight. We find Berristan Selmy and Grey Worm in what appears to be a sure-fire death trap: A dead end corridor filled with the gold-faced assailants and only two of the queen's men left to defeat them — somehow they do. Berristan Selmy is the only reason Grey Worm doesn't die immediately (and by immediately, I mean after being stabbed and beaten and somehow still getting up), but as Selmy dies, Grey Worm finishes off the last Harpy before falling onto the ground among all the dead bodies himself. That's it, right? Lights out. Grey Worm is gone.

Well, I choose to believe that he was just really freaking spent from continuing to fight with stab wounds and bruises and God knows what else. If you were him, you'd collapse too. Plus, per the books, Grey Worm isn't simply defeated in a battle that proves the Sons of the Harpy mean business. There's also the fact that he's got his own Pop toy (and sure, The Mountain has one too, but I'm pretty sure the only reason they did that is for the irony of taking that giant killing machine and making him pocket sized with the eyes of a woodland creature).

Dude's largely been hanging out around Dany, daring Game of Thrones to make his storyline bigger. Sure, we've come to appreciate him over time, but he's not has his moment until this episode. And this just can't be the episode in which he dies.

And in case you're like me and need a little hope right about now, here's what happens to Grey Worm after the Sons of the Harpy ordeal is over (book spoilers ahead, in case that wasn't totally clear):

But here's where the problem comes in:

So, did the showrunners just cut this story off at the pass? Did they decide it would be better to use Grey Worm and Selmy for a dramatic scene than to give them the end they see in the books? Hey, considering the fact that Sansa has been going her own non-book way for the sake of better storytelling this season, I wouldn't put it past Game of Thrones to cast these two aside.

Of course, if they're willing to cast aside Grey Worm, I'm just going to sit over here in my corner and hope it's because they're making room for more Daario. Hey, it could happen.