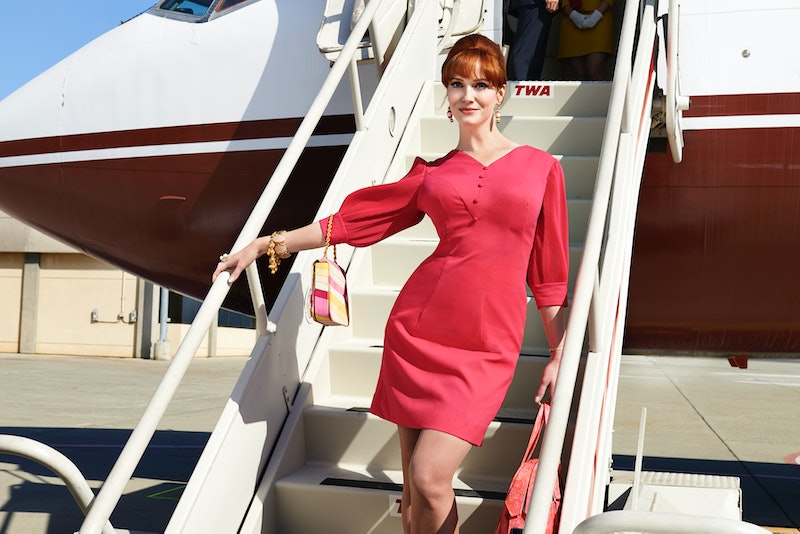 With only two episodes left of Mad Men, the times are changing hard and fast now. Gone is Sterling Cooper and Partners, now everyone's been absorbed by McCann-Erickson, and as Joan says herself, it's been a bit "bumpy." That might be an understatement. It seems from the moment Joan steps foot into the new office building, everything changes. Not just from a new setting and a new company standpoint, but things at McCann-Erikson are different, and it's like Mad Men has suddenly gone back in time ten years, considering that Joan is told, point blank, that a colleague underneath here will never think of a "girl as his boss." What is this, 1961? How does Joan handle the sexism at McCann-Erickson?

For seven seasons, we've seen the rise of Joan, from the secretary in charge of everything, to an account woman in charge of her own future. She knows what she wants, and she's always gone after it, even if it meant compromising her beliefs — not to bring up that one time she slept with someone at Jaguar for the account, but even though she got what she wanted out of it, it was a hard thing to do. Joan's past that, now. She's a partner. She's got a contract for half a million at stake in Sterling Cooper and Partners, which has now been transferred to the new agency.

Except at this new agency, things are different. When Joan first shows up, she's greeted by a "welcoming committee" consisting of two other women at McCann-Erikson, and they bring her a plant. They're there to gush about Joan's accounts — namely Avon — and know that Joan is important, offering their help if she ever needs it. But something's off about this meeting. These two women talk about how Joan has to go through fifteen different people just to get them pulled to any project they might have, and then discuss going out to "complain" and "bitch" over drinks. That's not really Joan's thing, you know?

During a conference call with a client, Joan is giving a male underling to work with, and he botches the whole conversation. He confuses clients, and doesn't care about it at all. Joan's pissed, needless to say. She goes to her boss, Ferg, and asks if could no longer work with him. Ferg is more than happy to deal with it.

But, he also asks Joan to see the "other side" of it, too, suggesting that this guy — who doesn't have the authority of Joan — doesn't want to go back home to his wife and kids and explain that he works for a woman. I know, the horror. Joan's taken aback, of course, like any woman who has risen through the ranks would be, after being told that someone doesn't want to work for her because she's a woman.

That's not all. This guy Ferg (can be classified as a "Harry Crane" type) is more than willing to help Joan with her problems at the office, and then a little bit more. He's got ulterior motives, and the creepy kind of ulterior motives, at that. He subtly suggests that he and Joan should take a weekend away together, to get to know one another — he means just have lots of sex, basically. And Joan is like, "hard pass, no thanks."

He sends her chocolates anyway, with a note: "Pick a weekend."

So how does this end? For Joan, it really ends. She's offered a buyout of 50 cents on the dollar, and after some pressure from Roger, she takes it. Just like that. She's done. She grabs her Rolodex and she walks out of the office, her welcome plant still hanging in the window.

And you know what? It sucks. It sucks so much for Joan, especially since I know what she's done, and what she's given up, to reach this point. And now, because she asked the wrong guy for help, she painted herself into a corner that she just couldn't get out of. So she just takes her money and leaves, as if she was never at McCann-Erikson to begin with.

And you hear that? That's my heart breaking into a thousand pieces for Joan, because this was one situation she couldn't get herself out of. And it sucks, because Joan is such a strong, independent, powerful, smart, and savvy woman. This is not how her advertizing career should have ended. It ended with a whimper, instead of a bang.

More like this
Simon Bird’s New Show Is *Very* Different From 'The Inbetweeners'
By Nola Ojomu
'Gentleman Jack’s Cast & Crew Are Keen On Season 3, Too
By Frances Stewart
Kenneth Branagh Looks & Sounds *Exactly* Like Boris Johnson In 'This England'
By L'Oréal Blackett and Rachel Mantock
Billie Piper Just Confirmed 'I Hate Suzie’s Festive Return
By Kayla Blanton and Shahed Ezaydi
Get Even More From Bustle — Sign Up For The Newsletter