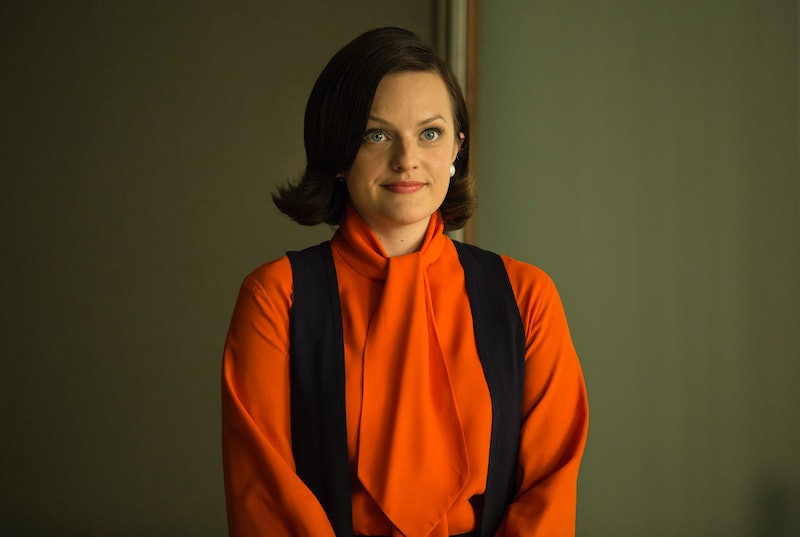 I haven't been this bummed out by Don Draper and company in a while. The episode focused around the physical move from SC&P to McCann-Erikson. However, one shining moment was Peggy and Roger's conversation on Mad Men in the empty SC&P office. Peggy's new office at McCann-Erickson wasn't ready yet. At home, her secretary delivered flowers that she thought were an apology. However, they were meant to welcome all new secretaries at McCann. This, of course, was an insult, however awkward it was to learn from her own secretary. It's interesting that the final season is taking us back to attitudes that we haven't seen since the first season. Peggy sure has bad luck with flowers. (Remember when she stole Shirley's flowers off her desk, thinking that the secretary holding them for her?)

Ms. Olsen went to work in the empty SC&P office. When her office was finally ready, she was the only one available to answer the phones, like a secretary. Isn't that a lovely bit of irony? Even though this wasn't the first office space we saw on Mad Men, it was still sad to see Peggy walking around and spilling coffee in such a dreary, empty space. I did enjoy seeing all the different signs from all the different names the firms has had stacked on the ground.

Then, in a weird twist, Peggy started hearing spooky organ music in the empty office. Was she about to see a ghost? Was her transformation into Don Draper, who just had a sleepy chat with the spirit of Bert Cooper, complete? No, it was just Roger. The two shared some drinks and feelings about the buildings. "It was a Hell of a boat," he said to her. Roger was apparently going through the office and collecting things that he thought seemed fun. He showed Peggy an old pornographic painting that Bert Cooper hung in his office of an octopus pleasuring a naked woman. He told Peggy that she should hang it in her office as an intimidation technique. "Aren't I supposed to be putting men at ease?" Peggy asked.

It seemed pretty clear that Roger and Peggy weren't going into work any time soon. That's good, because with Don off Keroac-ing, Roger is going to need a friend. Peggy wants Don Draper's job. That we know. But this scene showed an amusing, powerful side to her character that we haven't seen in a while. This is the Peggy that crashes a party at a strip club just to prove a point. I like this Peggy! She's definitely more Roger Sterling than we give her credit.

Their drunken afternoon turned into an evening of music and roller skating. Peggy did not show up to work until the next morning — and boy, was that an image. In strolled Peggy Olsen, sunglasses on, cigarette dangling out of her mouth, and holding the provocative painting so that everyone can see. It was perfect.