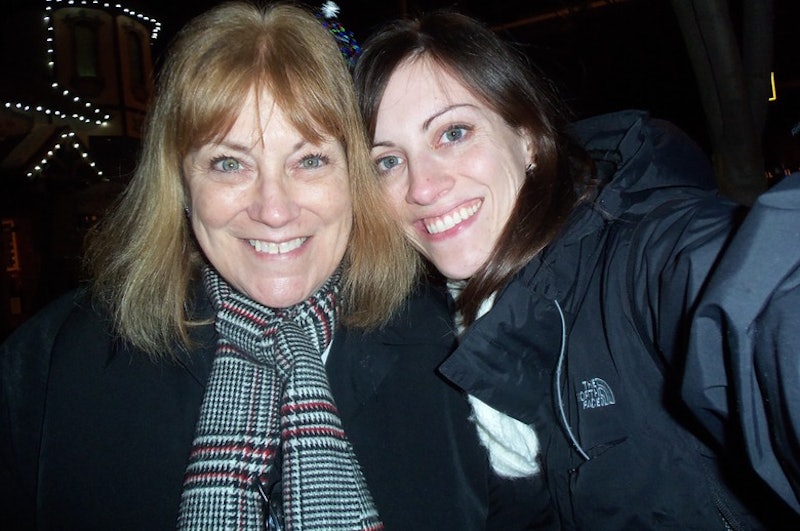 I became a mom the week before Mother’s Day of 2014. Logically, I knew everything was different now that I was A Mother, but I still felt like the same person. The lightning-strike sensation of being forever changed? It wasn’t like that for me. It’s been a much slower, much more gradual shift. Motherhood is something I’ve grown into.

The first two weeks at home with our baby somehow managed to be everything and nothing like my husband and I had expected. I lost all sense of time as the days blended into one another; a cyclical loop of painful breastfeeding attempts, securely-fastened diapers that somehow still managed to leak, and sleepy snuggles with our six-pound cub who was as tender and trusting as we were doting and devoted. Once my husband had to go back to work, my mom volunteered to come stay with us. Our baby was just 15 days old when she arrived.

On the good days, I was confident that I was getting the hang of things, but on the really tired, really hormonal days — the days where I was running on two hours of sleep, where every diaper was spilling, where every nap was just short enough that I didn’t have a chance to doze along with him, I was desperate to stop feeling like such a beginner.

My mom was right there with us, staggering around and sleepily and offering to hold the baby, to rock him, feed him, change him — whatever we needed. She did laundry every day, folding it and placing it neatly on our bed. On one particularly rough evening, when we were going back and forth on the phone with our HMO for hours, she made a dinner of homemade soup and kept it warm all night, until we could finally eat it.

She was breathing room in human form; giving me moments of not only rest, but hope that it would eventually get easier — and that I would someday be able to care for my son with the same ease she seemed to display in caring for me.

I didn’t feel right, physically or emotionally. In hindsight, I knew something was off.

Our baby was 23 days old when I dropped my mother back off at the airport for her return flight. To say I was nervous for the following day, my first day at home alone with him, was an understatement. My husband did the best he could to comfort and reassure me that I was doing well for our baby — I was his mother, after all — but I still couldn’t shake the anxiety. I didn’t feel right, physically or emotionally. In hindsight, I knew something was off.

In the morning, I was exhausted to the point that even getting up was overwhelming, and my whole body ached in a way I hadn't felt since giving birth. Even changing the baby was grueling, so much so that I desperately collapsed on the bed afterward. Both my husband and I thought I was still just feeling latent effects of the delivery, but after he left for work, I instinctively took my temperature.

I don’t remember the exact digits, just that it was somewhere around 101. After weeks of stress over breastfeeding and reading everything I could about it, I recognized that my symptoms were identical to mastitis, or a breast infection. I understood that the best cure was to continue nursing — which sounded simple, but seemed impossible. I had no choice but to ride it out. It was my first morning at home with my son, and already, I was facing my first major challenge.

And so, with my baby calmly lying next to me in his swing, I called my mom. I barely got through the first few words before I broke down.

If she was concerned, she didn’t show it. She was calm and collected, asking how the baby was doing, when my husband was going to be home, and about this infection I was fighting. I’m sure she was performing some kind of mom-triage, assessing whether or not she needed to encourage me to go to a doctor or ask my mother-in-law, who lived 30 minutes away, to come over. Ultimately, she did neither of those things.

First, she called me “Sis,” the nickname my family has had for me for as long as I can remember. Then, she told me I could do it myself. Her exact words are fuzzy, but the gist of her advice was: “All you need to do is feed him and change him. Let him sleep, and you sleep. That’s it. It’ll be fine.”

I didn’t feel like I had the energy, but I was encouraged by how easy she made it sound. She repeated the same advice a couple more times during our phone call, and when we finally hung up, my tears were drying, and my breathing was steadying.

When my husband finally got home later that afternoon, our baby was doing fine. Like my mom had instructed, he’d been fed, he’d been changed, and he’d napped in his swing while I rested on the couch, an arm’s length away. My husband, who’d been stressed and worried about us during his workday, was relieved and proud of me.

Actually, so was I.

This week, our baby turns one. Of course, there have been plenty of other challenges, and I've called my mom in need of advice dozens of other times. But never again have I felt as frantic as I did that first day at home alone with our baby. That first pep talk she gave me and the confidence it instilled in me has remained, helping me through other challenging moments this year.

It's humbling to think about what these first 12 months have entailed — we've had our share of doctor's visits, nighttime feedings, diaper changes, and wiped tears. We've also had more snuggles than I imagined possible, more genuine smiles than I've ever experienced, and celebrations over countless milestones like sitting, crawling, and most recently, walking.

Among other things, my first year of motherhood has opened my eyes up to what my own mom did for me during my childhood, and still continues to do for me today. There's a whole new world of subtle, behind-the-scenes mothering that I never even knew existed, but which I'm beginning to figure out.

Now, when I call my mom, I'm no longer asking her what she thinks about things like jammies, pacifiers, or solid food. And our conversations are even further removed from the childhood requests I once had, like kissing a scraped knee, singing me a song, or reading me a story. But one thing hasn't changed since I was a kid, even now that I'm now a mother myself: I will never stop appreciating how she believes in me.