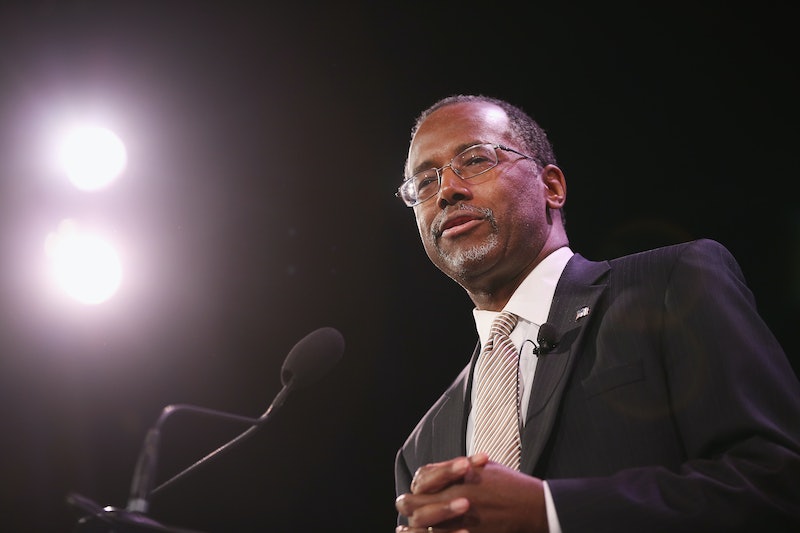 The Republican Party added another presidential contender to its roster after Ben Carson officially announced he is running for president Monday. Though the retired neurosurgeon has never held a political position, he's been a frequent player in national conversations about key issues, such as whether or not same-sex marriage should be allowed in the United States. On one hand, Carson says same-sex couples should be afforded the same legal rights as heterosexual couples. But Carson's stance on gay marriage has also held firm that the term "marriage" should only be reserved for unions between a man and a woman, and his outlandish comments on gay marriage have repeatedly been blasted over the years.

Carson had been a frequent guest on Fox News over the years, but his 2013 comments on same-sex marriage was what catapulted him into the national spotlight. During Supreme Court arguments over whether gay couples had the constitutional right to wed, Carson spoke to Fox News' Sean Hannity and compared homosexuality with pedophilia and bestiality, inciting outrage from the LGBT community.

My thoughts are that marriage is between a man and a woman. It's a well-established, fundamental pillar of society and no group — be they gays, be they NAMBLA, be they people who believe in bestiality, it doesn’t matter what they are — they don’t get to change the definition.

Carson was set to deliver a commencement speech at Johns Hopkins University, but students petitioned for his removal because of the TV interview and he withdrew. He later apologized for offending anyone for his comparison but remained firm on his views that word "marriage" should not apply to same-sex couples.

In 2014, Carson once again sparked a firestorm of criticism after suggesting sexual orientation was a choice. In an interview on CNN's New Day, he argued prisoners would often change their sexual orientation once they were incarcerated, which he said proved people chose whether or not they were gay.

Because a lot of people who go into prison go into prison straight, and when they come out, they're gay. So, did something happen while they were in there? Ask yourself that question.

The huge backlash against his comments has prompted Carson to declare he won't discuss gay rights during his presidential campaign. In March, as he teased and considered a possible White House run, Carson told Sean Hannity in a radio interview, "Every time I'm gaining momentum, the liberal press says, let's talk about gay rights — and I'm just not going to fall for that anymore." But with LGBT a major social issue of today's generation, Carson most likely won't be able to avoid questions about his views on gay marriage.