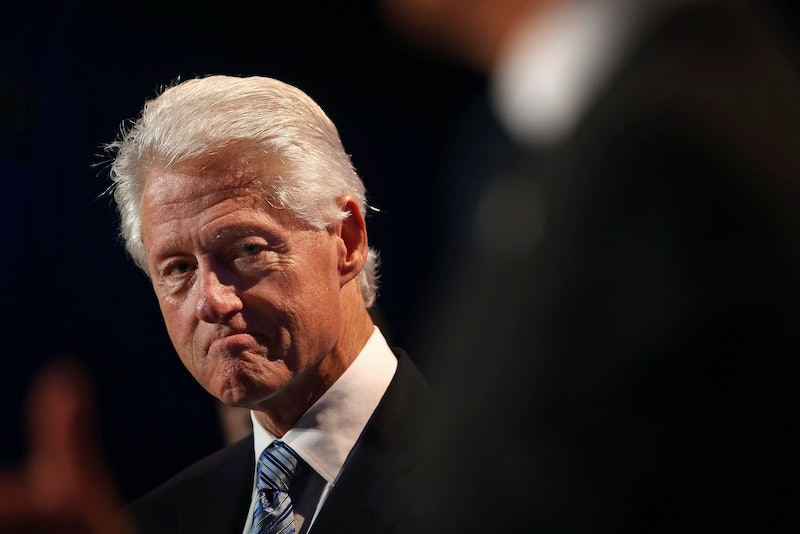 After Hillary Clinton announced her candidacy for president, her organization with husband Bill, the Clinton Global Initiative, has come under fire for foreign donations that critics believe may have influenced the former secretary of state. (Hillary and Bill have vehemently denied these claims.) In an interview with NBC News on Sunday, Bill addressed the foreign donations, which accumulated to millions of dollars in cash from companies and governments based in nations such as Saudi Arabia, Brunei, Qatar, and Russia. The former president — who may become the first First Man — denied the allegations that the massive foreign donations were "inappropriate," insisting that the charity did not cross any boundaries.

Hillary Clinton removed herself from the organization when she decided to run for president in 2016. However, many of her critics are still questioning whether taking these foreign funds swayed her while she served in President Obama's cabinet.

When asked if taking millions in funds from places such as Saudi Arabia was a misstep that perhaps had serious (and negative) implications, Bill quickly deflected. He told NBC News:

I don't think there's anything sinister in trying to get wealthy people in countries that are seriously involved in development to spend their money wisely in a way that helps poor people and lifts them up. I think it's good.

Bill added that a lot of these criticisms are only coming to light because of Hillary's new political goal: the Oval Office. "There's been a very deliberate attempt to take the foundation down," Bill told NBC News. "There's almost no new factors now that weren't known when she ran for president the first time."

The Clinton Global Initiative recently announced that it would place a ban on foreign donations — save for six approved Western countries. However, Bill denies that the ban has anything to do with these recent allegations, or if taking millions from places like Russia was a mistake. "Absolutely not," Bill said.

There is no doubt in my mind that we have never done anything knowingly inappropriate in terms of taking money to influence any kind of American government policy. That just hasn't happened.

But the ongoing controversy still remains a bump in Hillary's road to the White House, as the former secretary of state is expected to receive even more scrutiny when the primaries heat up in 2016. Many of Hillary's critics, of course, consider Benghazi an important talking point, but now there's a new eye on the Clintons' involvement with Russia.

According to a recent New York Times investigation, published in April, Bill was paid a $500,000 speaking fee from a Russian investment bank with ties to the Kremlin. The news source called the foundation, which was founded in 2001, a "sprawling concern."

Over the last month, however, aides to Hillary Clinton have told various news outlets, including Yahoo! Politics, that any allegations that these funds directly impacted her tenure as secretary of state were baseless.

More like this
23 Abortion Funds In States With Trigger Bans To Donate To
By Emma Carey
President Zelensky Spoke Out On Ukraine's Chances Of Hosting Eurovision Next Year
By Sam Ramsden
Michigan’s Governor Is “Going To Fight Like Hell” To Protect Abortion Access
By Andrea Zelinski
LGBT+ Men Fleeing Afghanistan Were Denied Asylum By The Home Office, New Findings Show
By Sam Ramsden
Get Even More From Bustle — Sign Up For The Newsletter