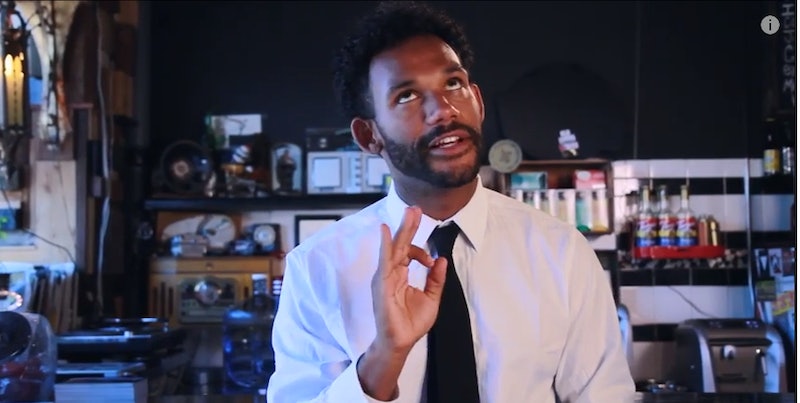 Y'know, I have heard from several seemingly honest, real humans that they enjoy working in the service industry. I have problems accepting such candor as sincere, but that's probably because my firsthand experience of being a server was...not good. For starters, most patrons forget restaurant etiquette. Basically, as a server or bartender or barista, you're paid to act interested in what customers have to say, and to me, that feels really icky. It's a pretty elaborate facade, and if waiters were honest more regularly like they are in this BuzzFeed video (i.e., if they'd still be promised jobs after speaking their true minds), we, as a society, would probably get a whole lot better at cooking food for ourselves.

I absolutely believe each person in the world should experience working in the service industry. Even for just a month. It's painfully clear, too, when dining or drinking out with friends, who has gone through the serving ringer and who has not. I can spot my fellow former waiters and waitresses from the moment we arrive in a lobby, even. And seriously, that feeling of camaraderie in knowing we are not going to be a server's most-despised table of the night is a good one (be courteous and patient and if you want extra credit, pre-bus the table). However, even though I strive to not be a pain, I'm sure I'm still somehow further disgruntling servers—although I'll never know for sure, because waiters aren't paid to be honest. Here's some server truths you might miss among all the plastic smiles and fake laughs:

Although clearly legit sickness can and does happen, a huge part of serving culture is hanging around for drinks with the staff after. As such, it's pretty likely whoever is waiting on you is simultaneously and sneakily tending to a killer hangover. Honestly, this server superpower is all-around an impressive feat. Ask for tips, maybe.

If you think a server guffawing over your cheap shot about a recent sports game is sincere, that is hilarious. Part of the winning formula to score a good tip is to make the patron feel good—ego-stroking included. It's like how exotic dancers at strip clubs flirt: it isn't because a person is cute, it's because they want to save up for a dope new purse or something.

Their recommendations are random

Most restaurants give employees a free meal a shift. This is a pretty rad perk early into a serving tenure, but if your server has been at said establishment for any length of time at all, they've exhausted their options and won't offer a legit recommendation. Chances are, they'll opt instead for just a popular item or something on the pricy side to rock their tip percentage of the total bill. For example, I worked at a barbecue joint for about half a year—and I'm vegetarian. Speaking with guests about my favorite dishes at that point was pure fiction.

Fair warning: If you've never worked in the service industry, this video might blow your mind. However, it's probably a positive thing to hip yourself to. If nothing else, it should make your former or current service industry friends less embarrassed to dine out with you: