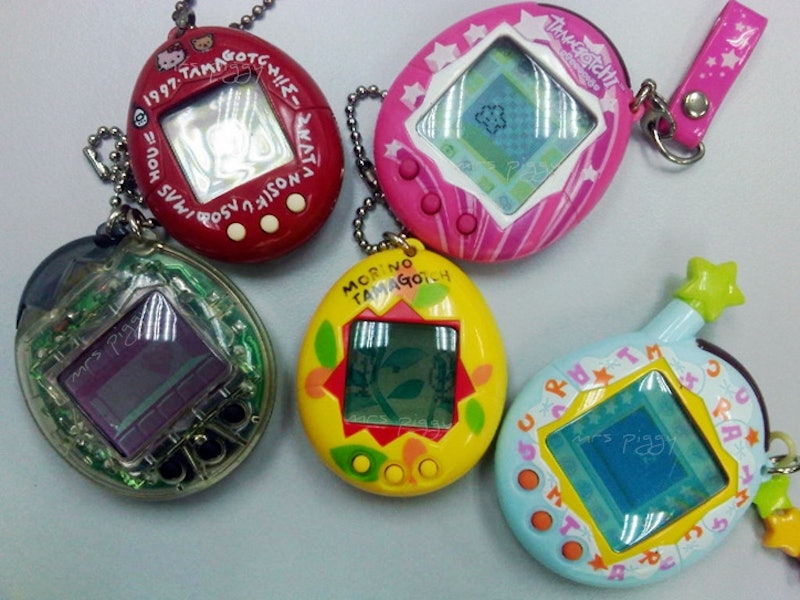 The Tamagotchi Classic app debuted in April, taking the place of the Tamagotchi L.i.f.e. app that had previously served a similar purpose. It's worth noting that you don't actually need an Apple Watch to use Tamagotchi Classic; when opened with an iPhone or iPad, the app displays a picture of the plastic egg we all know and love with a little pixelated Tamagotchi sprite bopping around inside it. You can feed it, play with it, clean up after it, check up on its health, and do all the other things you used to do with your digital dependent — and believe you me, it is exactly as demanding as you probably remember it being. I downloaded the app about half an hour ago for the low, low price of 99 cents, just to see how closely it resembled the original toy… and the answer is, pretty dang close. Just like the Tamagotchi of the '90s, there's no way to turn this sucker off; accordingly, the damn thing hasn't stopped calling for me since I first booted it up.

So what does the app do with its newly-acquired Apple Watch support? I'll be honest: It does pretty the same stuff it does from your regular ol' non-wearable tech devices. According to its page on the iTunes App Store, “You can now check on your Tamagotchi's status and take care of it on your Apple Watch.” These activities include being able to “check your Tamagotchi's status at a glance,” as well as sending it to the restroom and feeding it. Furthermore, if your Tamagotchi calls for you, the plea for attention will show up on your Apple Watch screen, thus eliminating the need to yank out your phone to deal with it. From what I gather, the Apple Watch version is a little pared down — I don't think you can play with your little electronic pet on the device, for example — but you can still take care of its basic needs.

I would argue, though, that whole point of giving a Tamagotchi app Apple Watch support is for the nostalgia factor. Playing with a Tamagotchi on your phone is fun and all — but something about playing with it on a wearable more accurately recalls what it was like carrying around that little plastic egg with you wherever you went. Of course, it also turns your Apple Watch into a $600 children's toy… but whatever. If you can afford an Apple Watch, you may as well get the full Apple Watch experience. Or something. (I don't have an Apple Watch, nor do I have a strong desire to get one, so I'm not sure I can speak to how exciting having a Tamagotchi on one would be.)

The Tamagotchi Classic app is also available for Android devices, although I don't believe that version of it has support for Android-based wearables. In any event, though, Tamagotchi Classic isn't the only toy from your childhood having a renaissance thanks to today's technology; check out these picks, too:

This version of Oregon Trail looks a little more elaborate the one I grew up with — apparently you can collect items, combine them to make new equipment, undertake additional missions, and even buy buildings in towns you pass during your journey — but it's good to know that your party members can still die of dysentery. Some things never change.

I believe the Furby app is actually a companion program for actual Furbies; not unlike the Tamagotchi app, though, it allows you to feed your Furby strange and exotic foods (including sandwiches). It also includes a complete Furbish to English dictionary.

Even though I have never been able to make it past the first three stages of Green Hill Zone without exhausting my supply of extra lives, I still downloaded this app as soon as I discovered it existed a number of years ago. Live it. Love it.

OK, so technically this one isn't an app — but it will turn your iPhone into a Game Boy, and that's kind of awesome. Heck yes.

I feel like I really shouldn't be surprised by this one, and yet somehow I am: American Girl has a whooooole bunch of apps girls can use to take their love of the brand with them wherever they go. The ones that hit the nostalgia buttons for me are the craft apps, like Friendship Ties; they recall the types of DIY books from American Girl I remember loving so much when I was a kid. There's also a Playful Pet app that lets you take care of a digital puppy, in case you want something a little less retro-looking than Tamagotchi Classic.