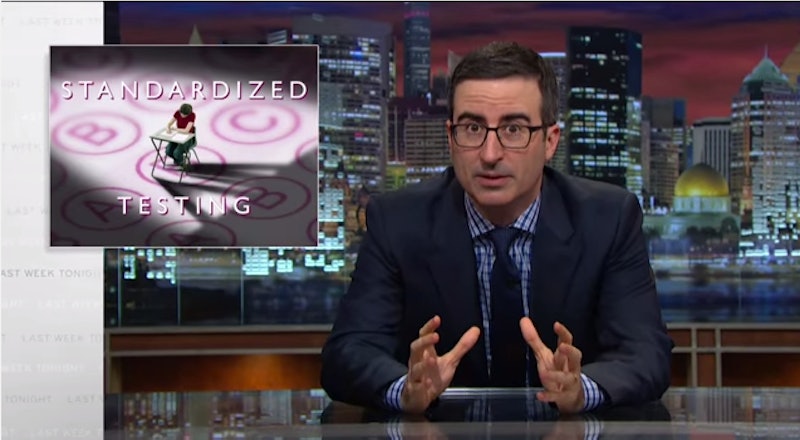 Ah, there's a gentle warm breeze in the air, the flowers are in bloom, and... it's time to study for your SATs. Springtime also means it's standardized test season, which turns what should be a joyous few months into absolute hell for many kids. On Sunday night's episode of Last Week Tonight, John Oliver explains why standardized testing fails to be effective, noting there's something wrong with a system when "we just assume a certain number of kids will vomit." And the primary target of his wrath is Pearson, the largest standardized test company.

Oliver opens his segment by point out just how scary these tests are.

Standardized tests: the fastest way to terrify any child with five letters outside of just whispering the word "clown."

In fact, kids hate them so much that schools really have to go out of their ways to make them seem more fun, from making music videos using popular top 40 hits like "Call Me Maybe" (in this case, "Test Me Maybe") to putting on pep rallies featuring dancing monkeys.

Look, let's all agree that there's no scenario in which the words "Here comes the monkey" can fail to pump you up.

So, naturally, Oliver brings out his own dancing monkey to pump up his audience.

So if standardized testing is as fun as these videos and rallies make them out to be, then why is reality telling a different story? Apparently, many students are opting out and boycotting the tests, sometimes as many as an entire class. And it's because they've had enough. A news clip reveals that some students take an average of 113 standardized tests before graduating high school.

A hundred and thirteen is a lot of tests. It's approaching the amount that you'd ask your doctor for the morning after you woke up from a one-night stand with Colin Farrell.

This amount of testing has caused a substantial number of kids to throw up or cry from the sheer pressure. There are even official instructions for administrators in the event that a kid vomits on his or her test booklet.

Something is wrong with our system when we just assume a certain number of kids will vomit. Tests are supposed to be assessments of skills, not a rap battle on 8 Mile Road.

So how did our schools become bogged down with these tests? In the late '90s, America was scoring near the bottom in international science and math tests, so in response, President George W. Bush announced on his third day in office, the No Child Left Behind program, which passed Congress with bipartisan support.

The program's mission was to use data from annual standardized tests to assess which schools were falling behind. And as a result, it nearly tripled the number of tests a student must take from six to 17. When Obama was still running for president, Oliver pointed out, he seemed adamantly against the over-testing of our school kids. However, when he was elected, Obama didn't get rid of the tests, and instead, added his own similar programs, like Race to the Top, which encouraged states to adopt the Common Core State Standards Initiative.

While Oliver is not bashing the intention of these programs, which is to narrow the gap of racial and economic inequality in our education system, he's pointing out everything that's wrong with their implementation. One of the methods? Rating teachers' effectiveness based on students' performance on these tests.

OK, well that explains why many teachers' classroom decorations that used to read "Believe in yourself" now say "Don't fuck me on this!"

And while that method may sound great in theory, there are many kinks that make it less than effective. For example, one Florida teacher's rating was negatively affected by a student's test score even though she had received a perfect score — because that student's predicted score exceeded the maximum number of points a student can get. In other words, it's absurd. What's even more absurd is that these teacher evaluations are actually based on formulas that were partly inspired by research that modeled the reproductive trends of livestock. But that's not all. These tests, it turned out, were not exactly accurate in determining a child's leaning abilities. When former Florida school member Rick Roach, who holds master's degrees and has taught numerous graduate courses, decided to take a replica of the Florida Comprehensive Assessment Test (FCAT) after becoming suspicious of its effectiveness, the test labeled him a poor reader. The consequences? Students who normally do exceptionally well in school frequently have their records tainted by tests like the FCAT.

So if these tests are terrible for both teachers and students, then who are they helping? The companies who make them, Oliver reveals. He decides to focus his ire on the largest one, Pearson.

Pearson are the educational equivalent of Time Warner Cable: Either you’ve never had an interaction with them and don’t care, or they’ve ruined your fucking life.

The only test they have no hand in is the HPV test ... and I can only assume that they'll get on that as soon as they see this fucking show.

Despite the company's rapid growth and control over the system, there have been countless complaints about their test questions, and some of them — including ones regarding a talking pineapple — have been pulled from booklets.The passage can be summed up like this: A pineapple challenges a hare to a race; other animals suspect the pineapple has a trick up its sleeve, but the hare wins and the animals all eat the pineapple. The moral: Pineapples don't have sleeves.

Students interviewed about the passage called it "stupid and absurd."Oliver says that he and his team got their hands on the test question and even they couldn't work out the answers.

That pineapple item doesn't remotely work as a test question; it barely works as a Doors lyric.

And it's not just the questions that are an issue, but how Pearson grades the tests. Oliver alleges:

What's worse is that some of these graders are inundated by test answers without having any understanding of these kids who are writing them. And others have to fill quotas when assigning grades, which no longer evaluates the answer by its content but by a regulation. Not only that, but Pearson also makes students and teachers sign a confidentiality agreement that prohibits them from revealing any text questions, even if they see something wrong with one. So, after a decade of these rigorous standardized tests and the system that surrounds it, Oliver has decided to put the test to the test. Have they closed the inequality gap? Nope. Have they raised our international scores? No, and in fact, they're slightly worse.

As far as I can see, this is a system that has enriched multiple companies, and it pays and fires teachers with a cattle-birthing formula, confuses children with talking pineapples, and has the same kind of rules regarding transparency that Brad Pitt had for Fight Club.

But the real clincher? For a testing system that judges a student's performance based on a certain set of numbers, it's not doing so well itself (if the international scores are any indication).

If all this pressure to increase your numbers is making you feel nauseous, like you might vomit at any second, then don't worry. I've got four words for you that'll make you feel better: Here comes the monkey!

More like this
What’s New On Netflix: A Victoria Justice Rom-Com & The Return Of David Letterman
By Arya Roshanian
What’s New On Netflix: The Return Of 'Bling Empire' & A Rebel Wilson Comedy
By Arya Roshanian
'Unforgotten's Brand New Character Joins At A Pivotal Moment For S5
By Bustle UK
Becca Tilley Confirmed Her & Hayley Kiyoko’s 4-Year Romance With A Heartfelt Note
By Brad Witter
Get Even More From Bustle — Sign Up For The Newsletter