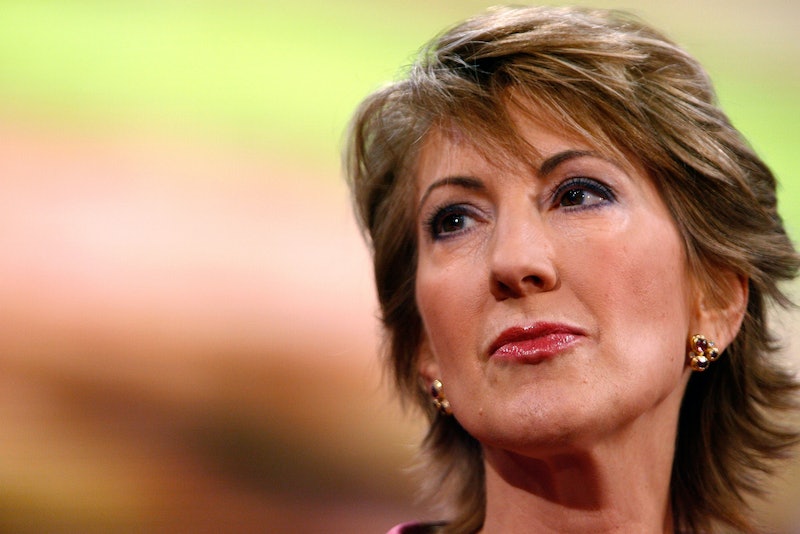 If there's one universal piece of advice I'd give to people even vaguely considering running for president, it would be: Register all your possible domain names right now. For example, if I thought I had a shot at becoming president of the United States (which is somewhat unlikely; among other reasons, I'm British), I'd purchase JennyHollanderForPresident.com, JennyHollander.org, ReadyForJenny.com, and JennyHollanderSucks.com within the next half-hour. Carly Fiorina has been pretty busy, though, and Fiorina apparently forgot to register CarlyFiorina.org. Fiorina must be regretting this now.

Why, you ask? Well, somebody else figured Fiorina might run for president, as she announced via Good Morning America Monday morning, and they've used visual aids to put together a website that is, well, pretty hard to forget. A bit of backstory: During her tenure at Hewlett-Packard — Fiorina was appointed CEO in 1999, which made her the first-ever woman to lead a Fortune 500 company — Fiorina laid off approximately 30,000 workers. This piece of information was used to great effect in an attack ad by Sen. Barbara Boxer, and the claim has been repeatedly levied at Fiorina for approximately a decade.

As Politifact points out, it's not untrue — but in the midst of a recession, Fiorina was forced to make tough decisions at HP. The job cuts were one example of a decision that, Fiorina argues, made the company a force to be reckoned with and created more jobs than were initially lost.

Which brings me to this.

As for that quote? From the original Fortune profile on Fiorina:

Fiorina does not agree, naturally, that there's been a brain drain. In fact, she believes that one lesson she's learned while running HP is that she should have moved more quickly in ejecting certain people. Smartened up now, she says, "I would have done them all faster. Every person that I've asked to leave, whether it's been clear publicly or not, I would have done faster."

Fiorina was publicly cut from HP in 2005 after a contentious merger with Compaq. In her 2005 commencement speech at North Carolina Agricultural and Technical State University, she reflected: "The worst thing I could have imagined happened. I lost my job in the most public way possible, and the press had a field day with it all over the world. And guess what? I'm still here. I am at peace and my soul is intact."