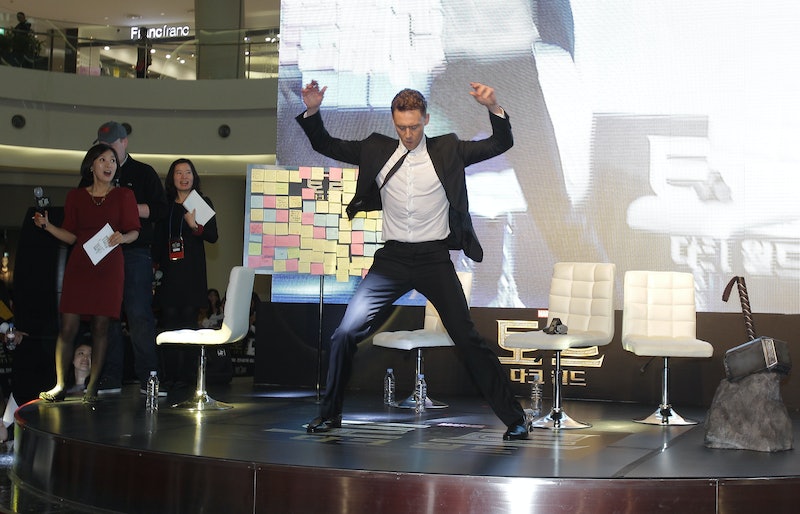 One of my favorite things about Tom Hiddleston is his talent for dancing. But more than just his natural skill, what's delightful about him is that he's truly passionate about it. The actor calls it "organized flailing," but all I can see is true enthusiasm. He's so energetic that he's been known to knock over chairs because he's so in the moment with his moves.

Hiddleston has been classically trained in dancing for period films like Return to Cranford, but he also possesses some club-worthy moves like "the snake hips" which is such a sensual move it should be illegal to perform in front of fangirls. He can also pop and lock and do the robot and the like — all while carrying a huge grin on his face.

His passion for dance is contagious. If he can have that much fun doing it, it makes me want to get up and move too. And since Hiddles firmly approves of more people dancing, here are some of his best dancing quotes to inspire you, coupled with GIFs of him moving his body. You're welcome and happy dancing!

“Never, ever let anyone tell you what you can and can't do. Prove the cynics wrong. Pity them for they have no imagination. The sky's the limit. Your sky. Your limit. Now, let's dance.”

I love that Hiddles doles out amazingly inspirational advice and then encourages everyone to let loose and just dance.

“There should be more dancing in the world. What can I say? It’s a force for good."

Especially the way Hiddleston does it.

"Someone said, "In what body part are you most confident?" I thought immediately ... I love my feet because without my feet I could not run and I could not dance."

That's the most precious answer.

“It’s organized flailing. I didn’t learn any steps, I didn’t train — that’s my misspent youth in the 1990s."

I think Hiddleston undersold his talent when he talked to The Scotsman. The dance world is better off for his misspent youth.

"I have always loved dancing. When my sister got married in India, I missed the dinner because I was dancing."

That's as good an excuse as any!

"[Tilda Swinton's] extraordinary. She has this mantra: life is all about kindness, friendship and dancing."

How sweet that Hiddles and Swinton share a love of dancing. No wonder they're such good friends.

That's Hiddleston's response to what he would do if he suddenly came back in the body of a woman. Just goes to show his love of dance would transcend gender.

"I love dancing, no secret about that."

Like Hiddleston told Yahoo, everyone knows he loves dancing, and his fans love him for it.

"I'd love to dance in a film. Absolutely, yes."

He admitted this during the Los Angeles Thor 2 premiere. So, sign him up for the next live musical, please! Perhaps Grease?

Hiddleston makes running sound so much fun when he compares it to dancing.

"I'm surprised that Thor: The Dark World has been the vehicle that has alerted various people to my, if not talent, at least enthusiasm for dancing."

Bless the Korean leg of the Thor 2 press tour for bringing out his dancing side, because I think he's arguably very talented and certainly extremely and adorably enthusiastic.

We should all strive to be an 11 on the enthusiasm scale of our lives, I would say. So, let's start by following Hiddleston's lead and dancing a little bit more.

More like this
Jake Daniels Just Became The UK’s First Active Football Player To Come Out As Gay Since 1990
By Sam Ramsden
What Is Jeanie Buss' Net Worth? The Lakers President Is Uber Rich
By Hugh McIntyre
Twitter Can’t Get Enough Of The WAGatha Christie Trial
By Nola Ojomu
Prince Harry Spoke Out About Archie & Lilibet’s Futures And What Worries Him The Most
By Sam Ramsden
Get Even More From Bustle — Sign Up For The Newsletter