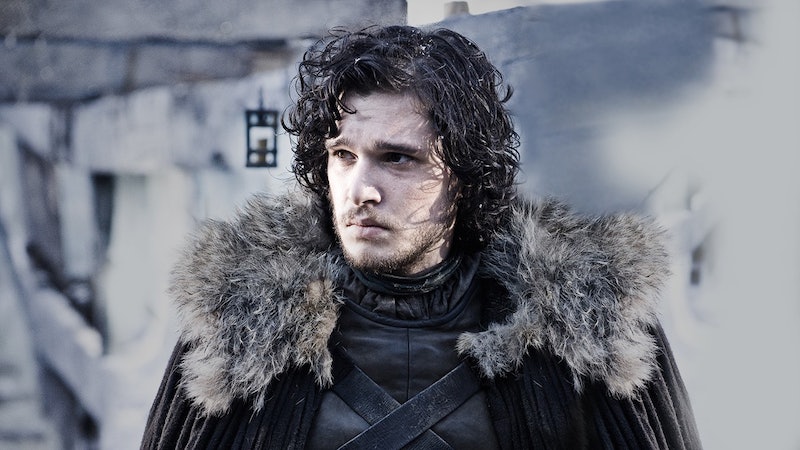 The bastard son of Ned Stark and now Lord Commander of the Night's Watch may know nothing, but it looks like we finally got some more details about Jon Snow's parents. If you're strictly a watcher of the TV show such as myself, last night's episode, "The Sons Of The Harpy," was probably extremely revealing, or at least suggestive, to Jon Snow's true parentage. But don't feel smug, because dedicated fans and theorists of George R.R. Martin's A Song If Ice And Fire series saw this one coming from a mile away. The theory: R + L = J, aka Rhaegar plus Lyanna equals Jon Snow. Mind blown yet?!

"Sons Of The Harpy" was all about blood, both literal and figurative. Ser Barristan Selmy and Greyworm both may or may not have died, but knowing Martin, I'm gonna guess that they are goners. They fell at the Sons of the Harpy, the masked men of Mereen; and in Westeros, the Sparrows are slicing sinner peen left and right. And there was a lot of talk about Jon Snow's power and the fallen Rhaegar Tarygaryen and Lyanna Stark, names that haven't been invoked in quite a while.

In two parallel scenes, Littlefinger tells Sansa Stark the tale of the Tourney at Harrenhall, which effectively lit the flame for the war of the seven kingdoms, and Ser Barristan tells Daenerys that Rhaegar wasn't such a cold-blooded killer after all. Why spend so much time reminiscing? To suggest that Lyanna was pregnant with Rhaegar's child out of love, and that child is alive and well in the Lord Commander of the Night's Watch.

It's been a long-time fan favorite theory, so these fans may have been patting themselves on the back during Sunday night's episode. As The Nerdist points out, the theory goes that Jon Snow's true parents are Rhaegar Targaryen and Lyanna Stark, and not Ned Stark and Barmaid, and "Sons of the Harpy" gave several heavy-handed hints that the show would adhere to this suggested storyline in the books, even though Martin hasn't yet definitively told us that this is true. Lyanna Stark might have truly and willfully loved Rhaegar even though she was betrothed to Robert Baratheon at the time; and though legend suggests (as Sansa coldly reminds Littlefinger) that the son of the Mad King raped and kidnapped Lyanna, bonding Stark and Baratheon to avenge her.

It's clear that Jon Snow doesn't want the Iron Throne. He denies Melisandre's seduction, both for sexytime and for power; she seems to know a lot more about Jon Snow than even he does. “There’s power in you. You resist it and that’s a mistake. Embrace it," she says to Snow. But sad Jon (even though he's hardened up a little, executing and all), denies her because he's still in love with the late Ygritte. And then to add insult to injury, Melisandre mimics Ygritte as she leaves the room: "You know nothing Jon Snow."

Then there's the offhand remark by Stannis, suggesting that Ned Stark would never be messing around and birthing babies with a barmaid. His honor wouldn't have allowed it, and that he has such an affection and protection for Lord Snow because he is his nephew and heir to the throne.

So what does that mean for little boy lost, Jon Snow? Most seriously it makes him an equal contender as heir apparent to the Iron Throne, being the grandson of the Mad King Aerys just like Daenerys. Also means that Dany is Jon Snow's aunt! This could be good or bad: good because it means that Jon and Khaleesi might meet up in the future. Maybe in the next few episodes, maybe in the next season, but it seems inevitable. Dany has been connecting or near-connecting with our other fave Tyrion Lannister (hopefully they cross paths soon) and maybe Jaime and Bron, too? Don't do us dirty, George R.R. Although you probably will.