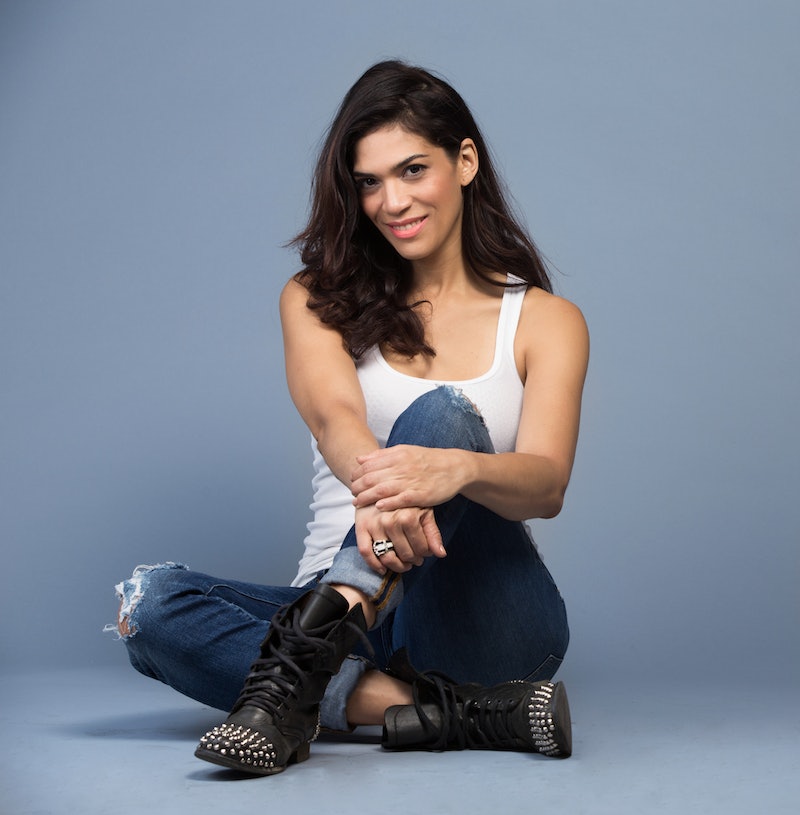 For those out there (and you know who you are) who are under the impression that a show centered around an almost all-female cast can't possible draw any kind of success, clearly you have yet to be introduced to Netflix's hit series Orange Is the New Black . Heading into its third season, this show has proven without a doubt how dynamic and complex female characters can be. But not just any female characters — female characters who are in prison . A topic that has had quite the social impact on our society ever since audiences first entered Litchfield's world, which, according to Laura Gómez (who plays inmate Blanca Flores on the show), the social injustice of the jail system is exactly the type of conversation OITNB is trying to bring to the table.

"There's a hungry audience out for real characters like this show has brought and they connect with not only the characters, but the actresses," Gómez tells Bustle. "[OITNB is a] cast of so many nationalities, so many backgrounds and races and just flavors and colors, playing such wonderful real characters and I think it's been a great thing for the industry to see that." And while she admits that sometimes the series does cater to some stereotypical viewpoints of life in prison, it breaks the rules in so many other ways and offers up insight into some very important real-life issues.

"It's brought all these topics to the table about the treatment of women in prison; about the justice system; about how unfair sometimes the punishment doesn't fit the crime," the actress states. "I know it's fiction, but it's kind of reflecting a little bit of reality… We've seen how the treatment of the inmates goes and there's not necessarily the right treatment to make these people fit into society when they come back from their time in prison." In fact, she believes that all this treatment is doing is increasing their chances of returning to prison.

"We're bringing them back to prison, that's what we're doing," Gómez explains. "We're not helping them come back and be active and helpful to society again. So it's kind of a circle that's not really working for our society at all." But thanks to the outstanding acting and phenomenal writing of this OITNB ensemble, we can at least acknowledge the problem and hopefully bring about enough change to make a difference in the future. This show may leave you rolling on the floor with laughter at times, but it also forces you to re-think everything you thought you knew about prison life.

More like this
Sandra Bullock, Girlboss Extraordinaire
By Matt Harkins & Viviana Olen
Britney Spears Met The Weeknd & Sam Levinson, So She May Actually Be On 'The Idol'
By Jake Viswanath
'Obi-Wan Kenobi' Takes Place After This Key Star Wars Movie
By Arya Roshanian
Here’s Everything Coming To & Leaving Netflix In June
By Alyssa Lapid
Get Even More From Bustle — Sign Up For The Newsletter