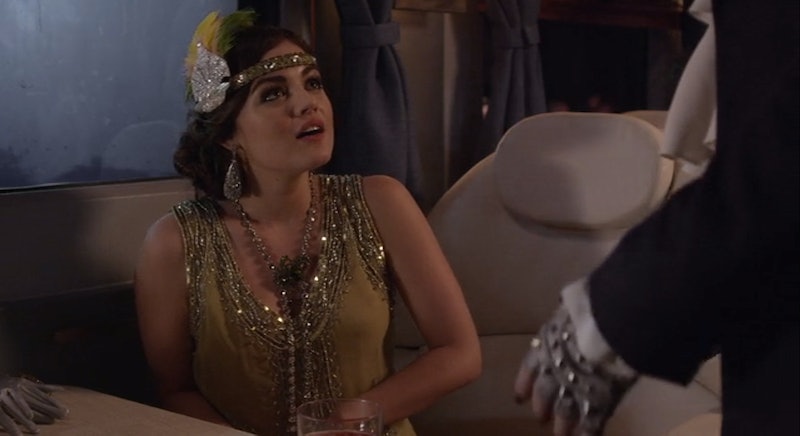 ABC Family wasn't kidding when it told us that the Pretty Little Liars Season 5 finale would give us a huge A reveal. Though we may not know A's true identity, we do have A's name: Charles. Right now it seems pretty likely that Charles is not only a long lost sibling of Alison DiLaurentis, but also her brother Jason's twin. Some fans were shocked by the reveal (who IS this Charles, anyway?) but as with anything on Pretty Little Liars, sometimes it's easier to go back to older episodes in order to put all the pieces together. I re-watched the Pretty Little Liars Season 3 Halloween train episode "This Is A Dark Ride" and found a major clue (see: anagram) that Charles was a part of the A game all along, proving that every little hint the writers give us is important.

For those of you who are a little fuzzy on your Halloween episodes, "This Is A Dark Ride" has the girls on the Halloween "Ghost Train," which is essentially a moving party that I'm pretty sure only exists on TV. (Oh, and Adam Lambert was there.) Of course, because this is Pretty Little Liars, A has also climbed aboard the train along with some of his minions. We knew so little about A at this point in the story — it was only a mere 12 episodes after Mona's initial A reveal, after all — that the clues this episode gave us seemed inconsequential. Clearly, we were wrong about that. Here's what we missed in "This Is A Dark Ride."

There's A Major Clue On Ice

Bethany's body (then believed to be Ali's body) was on the ghost train the entire time, in a Charon & Sons Funeral Directors body bag. The camera lingers on the logo for quite some time, and while we all imagined that was because of the freakin' body keeping juice boxes cold, maybe there's a better reason for it than we thought. Let's break down these words:

1) Remove the unnecessary letters and you get the name CHARLES in order.

2) "Sons." The DiLaurentis family has not one son, but two.

3) You can spell out "CHARLES ON TRAIN" using the letters in the words.

Clearly, Charles took Bethany's body and placed it on the train: it's basically spelled out for us. The writers have been sprinkling clues about his identity all along, and all it takes is a re-watch to pick up on them.

But there's more to this ghost train.

According to Melissa, it's Darren Wilden who kills Garrett and locks Aria in a box with Garrett's body, but Wilden was clearly put up to it by someone — like, say, A. Big A visits an unmedicated Mona in Radley and has her give him what he needs to shut Garrett up forever. Now it seems likely that this A was Charles all along.

Wait, Could This Person Be Charles?

The girls pass a house that has a coffin marked "Alison DiLaurentis." The jerk who owns the house, Clifford Yerdley, runs out of the coffin in a mask — at least, we think it's Clifford Yerdley. We never see the person's face, but check out that blonde wig — a little familiar, no? Could this person not be Clifford after all but Charles in disguise, looking to freak out the girls?

Baby Face Is Back

This mask showed up in the very first Halloween episode, "The First Secret." We know at least two people who were in the mask — Noel and Lucas — but that doesn't mean that Charles couldn't sneak into a third costume. In "The First Secret" we saw a van for Radley Sanitarium outside a house — could Charles have come back to Rosewood every year for his favorite holiday, Halloween? It would make sense, considering Mona also remarks that Halloween as some "bad connotations" for some of the patients at Radley — like, say, Charles himself.

I'm not sure why I brushed over this after the episode aired, but it's very clear that Jason and Lucas have some sort of connection. When Jason walks into the room and spots Lucas, he immediately dismisses himself from his conversation with Spencer and goes over to him. We have no idea why, and never get any other clues to a potential relationship between them. It should be noted that Charles DiLaurentis just so happens to be an anagram for "Nerd Lucas Is The Liar" — could Lucas have been Charles this whole time? It's definitely worth a second look when Season 6 returns.

Garrett & Jenna Did A Bad Thing

Here's the biggest thing that I picked up from the N.A.T. Club in the Halloween episode that I didn't really think of until the re-watch: These people did something very bad BEFORE Ali went missing. The girls used to assume that the N.A.T. Club had something to do with Ali's murder directly, but clearly there's way more to the story. In Garrett's flashback we see Garrett and Jenna whispering about not being able to trust Melissa and Ian with something, even though at this point, Ali is very much alive. There's no way that Garrett was just talking about the N.A.T. Club spying on people — that would hardly be a huge deal. Could the N.A.T. Club have been involved in a murder before Ali ever "died?" They're covering up something that we still have no idea about five seasons later.

The Ghost Girl Could Be Important... Or Not

There are a million ideas running through my brain about who this little girl could be. Could she be Bethany Young as a child? Sara Harvey, the girl who went missing shortly after Ali ran away? Considering the unlimited supply of probably-dead blondes on this show, it's all a possibility — in fact, most people thought the ghost girl represented Ali or her own twin when the episode aired considering we didn't yet know Ali faked her own death. An alternate theory? That this girl is simply the ghost of the murdered twin from Ali's story in "The First Secret" — she's played by the same actress.

Either way, just know that literally no clue can be ignored in this Charles mystery. Start digging, folks.