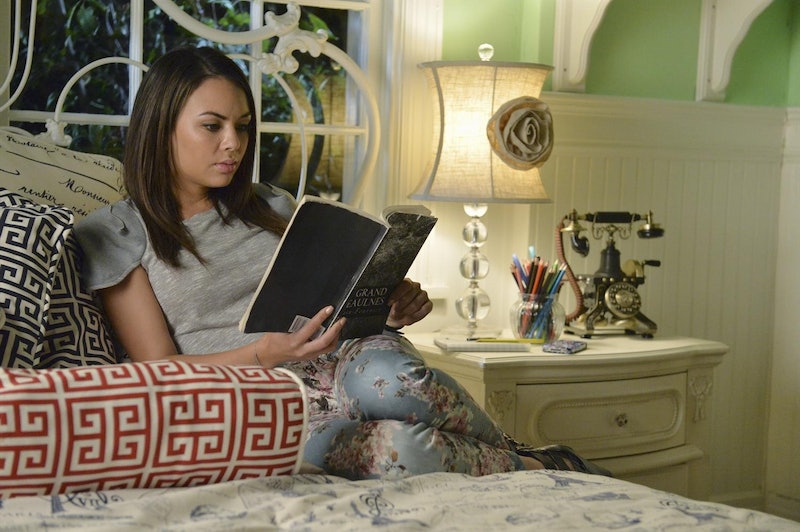 Leave it up to Mona to still be controlling the game, even from beyond the grave. Well, not like she had a choice — unless, of course, the PLL theories that Mona is alive and still playing A are true. (I'm not convinced, but hey, this is Mona.) On Tuesday night's episode of Pretty Little Liars, "The Melody Lingers On," the allegedly deceased, former A game leader dropped another A clue for the liars. And, obviously, we have a lot of questions — most importantly, what does Mona's note mean on PLL ? And is it another anagram like the Internet seems to believe?

Considering how carefully laid out most of Mona's plans are — including her plan to fake her own death (even if it went wrong) — I'd be willing to bet my Varjack theory on Mona's note being an anagram. Mona's the queen of codes and clues and, well, the A game itself. So it shouldn't be surprising to anyone that an extremely astute and possibly diabolical Tumblr user, prettylittleblackhoodie, decoded Mona's note's anagram to reveal something startling — a DiLaurentis name. Who in the world is Charles DiLaurentis? And could PLL finally be introducing that twin theory we've all been talking about for the past five seasons?

All three lines of Mona's note, according to prettylittleblackhoodie, spell out Charles DiLaurentis — a name we've never heard before on the series. I mean, obviously he's a member of Alison's family, but does she know him? Do Ali's dad or Jason know him? Could Charles be the last remaining tie between the DiLaurentis family and Radley? Is he Jason's twin? As usual, with the Big A Reveal just a few weeks away, PLL has introduced a whole new slew of questions. And it's entirely possible that Charles could be Jason's long lost twin brother or another DiLaurentis child that Mr. D is keeping hidden from his family.

The DiLaurentis family is already known for having secrets that would make the average person's skin crawl. So it's definitely possible that Charles DiLaurentis has been floating around, just outside of Rosewood, this entire time and we're just going to learn about him now. Unless, of course, Andrew hanging around Mona's house means more to this clue than anything else — what if Andrew is actually Charles and he's Ali's long lost fraternal twin? Once again, PLL has me questioning everything I think I know because why the hell not, right?

More like this
Who’s The Richest 'Grey’s Anatomy' Star? See The Net Worth Of Each Cast Member
By Hugh McIntyre
'The White Lotus' Season 2 Trailer Teases Multiple Affairs & Another Dead Body
By Bustle Editors
Dan Levy Appears In The Latest Teaser For The Weeknd's HBO Series, 'The Idol'
By Jake Viswanath
9 Movies & TV Shows That Prove Stanley Tucci Elevates Everything He’s In
By Jake Viswanath and Radhika Menon
Get Even More From Bustle — Sign Up For The Newsletter