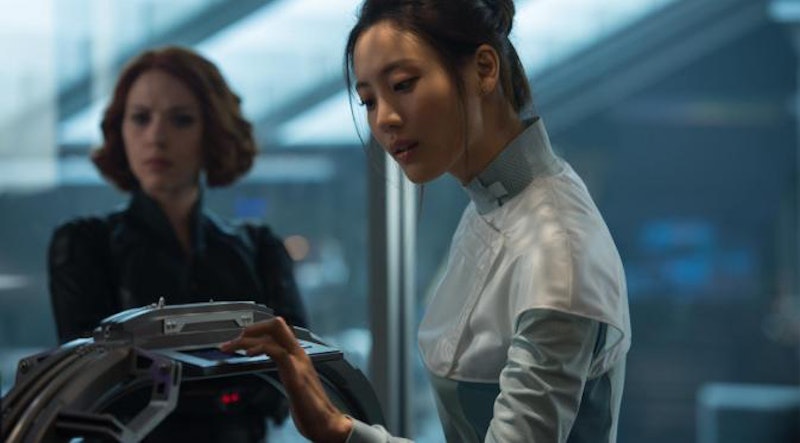 Among the many new characters introduced to the Marvel Cinematic Universe in Avengers: Age of Ultron — a lot that includes Quicksilver and Scarlet Witch, Baron Strucker, Ulysses Klaue, and Vision — we have Helen Cho, celebrated genetic scientist and friend to Tony Stark and his Avengers team. We meet the character early on in the film, as portrayed by relative unknown Claudia Kim (you might recognize her from the Netflix series Marco Polo), and follow her relatively sizable arc through some of its funniest and most frenetic sequences.

In the film, Cho is called upon first to tend to a wounded Clint Barton, applying her groundbreaking feat of the creation of organic matter to touch up a nasty injury incurred by Hawkeye during the opening act battle. Later on, Cho gets unwittingly wrapped up in the Avengers’ warfare against Ultron, the sentient cyborg bent on total conquest of the planet.

Helen might not be quite as familiar to casual comic book readers as some of the other characters welcomed into the MCU by way of Age of Ultron, but she has indeed had a minor presence in print. However, her work on Earth-616 has not actually wrangled her into the company of Tony, Clint, and the rest. Her son Amadeus, however, is another story.

The Cho family was introduced to the Marvel canon through the Incredible Hercules serial. (Perhaps this explains her in-movie attraction to demigod Thor.) Helen and her husband Philip raised a gifted son Amadeus, who at first spent his time on the page around the likes of Hercules and Zeus, and eventually found his way into the company of the Hulk, the Mighty Avengers, the Illuminati, and more. Meanwhile, Amadeus’ mother Helen has been restricted to a quiet life on Earth and an “afterlife” in the Underworld.

While the Helen we meet in Age of Ultron is hardly the same character introduced in Incredible Hercules, it isn’t as though she doesn’t have precedent in print — and it’s hardly as though she’s the only Age of Ultron character to stray from her comic book origins: with Ultron as a creation of Tony Stark rather than Hank Pym and Ulysses Klaue now a South African arms dealer as opposed to the son of German scientist Baron Von Strucker (who himself drops the “Von” in this picture), the reformed version of Helen is in some mighty powerful company.

More like this
One Powerful Quote In 'Doctor Strange 2' Is Going Viral On Twitter
By Alyssa Lapid
What Does Doctor Strange’s Third Eye Mean?
By Arya Roshanian
Meet Clea, Charlize Theron’s New Marvel Character
By Morgan Leigh Davies
'Bridgerton' Star Nicola Coughlan Confirms Season 3 Will Focus On Colin & Penelope
By Grace Wehniainen and Alyssa Lapid
Get Even More From Bustle — Sign Up For The Newsletter