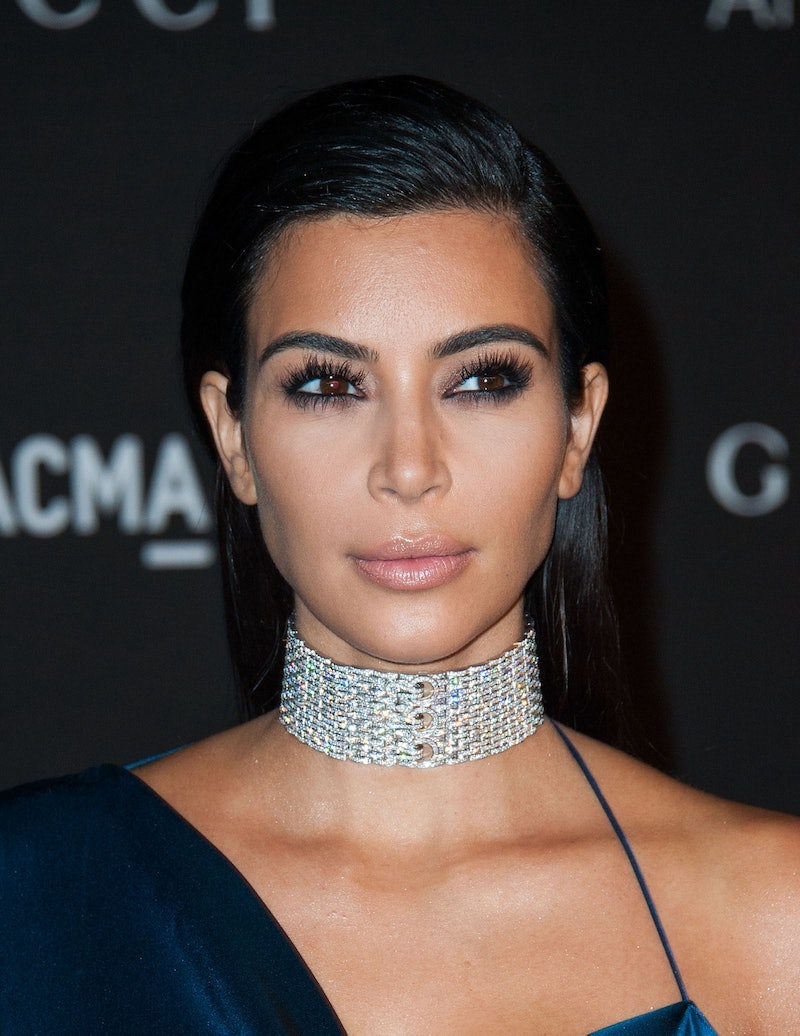 Kim Kardashian has been killing it with her fashion choices lately, so of course everyone's been waiting anxiously to find out what Kim Kardashian's 2015 Met Gala dress will look like. Last year, Kardashian wore an elegant blue and black (or white and gold?) dress that showed off all of her curves. Will she keep up with her trend of elegance or go off the cuff like she did in 2013?

So far, all the signs are pointing towards the former (woo!). We know for sure that Roberto Cavalli's creative director, Peter Dundas, is designing her dress for the event; Kardashian confirmed this Monday afternoon via Twitter. Then, Dundas tweeted a close up image of the dress's fabric, teasing us just enough to get those butterflies of anticipation. From the photo, it looks like it'll be a big ball gown, with plenty of intricate beading. Instead of a multi-colored floral pattern, Kim's sticking to shades of silver, black, and white that seem to form a tiger-like pattern. Makes sense, since the theme of the evening is "China: Through The Looking Glass." Gosh, I hope Kanye wears a suit made of a matching silver material. How utterly dapper would that be?

This dress will be the first for Dundas since returning to Roberto Cavalli in March. This dress is going to score the designer some major publicity for the fashion house. Twitter is already buzzing about the collaboration between Dundas and the reality show star.

Of course, there's nothing in Cavalli's tweet that specifically says this is Kim's dress, but I'm willing to be on it. Users on Twitter seem to think so too: A Kardashian fan accounted tweeted that this may indeed be the dress.

This design is beautiful regardless if it'll be worn by Kim K. The show's about to begin, and we'll update this post with more important Kardashian dress news as it comes.