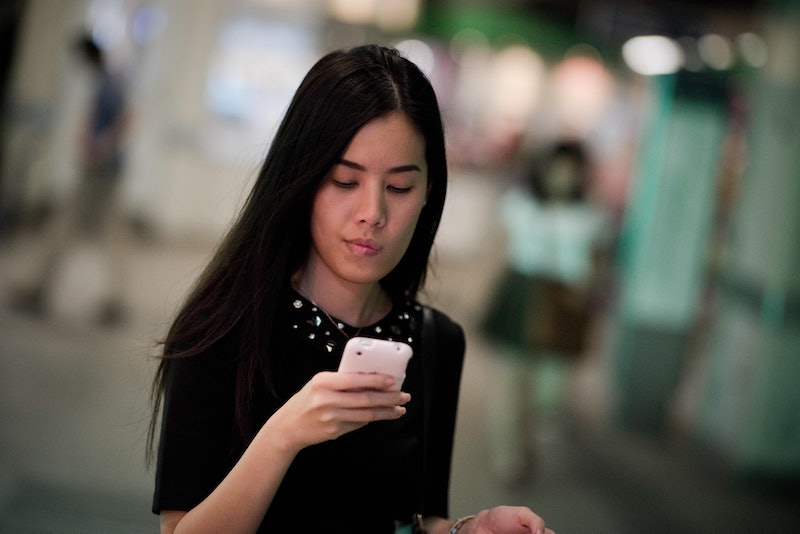 Most people I know have a love-hate relationship with Tinder. Personally, I'm all for people using an app to have a good time, as long as you're being safe, and if you happen to find the love of your life on Tinder, then mazel! Good for you. Whether you're searching for a soulmate, or conducting Tinder social experiments for Internet purposes, go you. This isn't the first time we've seen hilarious Tinder conversations that end up on the Internet, but this is my favorite un-staged Tinder incident by far: A girl rejected a guy on Tinder using only emojis after he tried to use emojis to get her to have sex with him. When you see his initial (laaame) Tinder bite, you'll see that her response is the most perfect thing to ever cross the Tinderverse—and luckily Bro Bible documented the whole emoji convo. It will give you some amazing #TinderGoals and ideas for your next response to any future emoji-addicted dates you may encounter.

While I've never used Tinder because I'm too terrified of anything so exotically fun, my friends will occasionally let me Tinder for them, especially after a few drinks. They'll set me up with their phone and a guy they're clearly not interested in, and see how far I can push their buttons. It's not the most appropriate pasttime in the world, but it's pretty good entertainment. After seeing this emoji conversation, I'm pretty thankful this chick has brought me to the light. She's spreading hope and hilarity and inspiring mischievous women e v e r y w h e r e. Here's the conversation:

It's a Tinder fail that Amanda certainly used to her advantage. While we've all been there, no one's ever made quite this good of a statement on their way out. If you're trying to stir up some shit on Tinder, here are a few cringeworthy and/or hilarious conversations to get your ideas flowing:

1. This woman joined Tinder as a dog, and it escalated all too quickly.

I'm so confused as to whether this is flirtation or Internet beastiality. Either way, I'm pretty skeptical. This conversation ends with the questionable alliance decides to... fight crime?WHAT IN THE NAME OF ALL THAT IS HOLY IS GOING ON?

2. To one up the puppy situation, Hillary Clinton quotes are the solution to your problems

Not so sure what just happened, but I think he read between the lines of the Hillary quotes and thought it was somehow an allusion to sex dolls. Edgar Allen Poe couldn't make such a metaphoric leap, but the gentlemen of Tinder can and they most certainly will. (On the plus side, he caught on eventually.)

3. Make weird, awkward, jokes that are ridiculously long and hope to attract a mate who pities your lack of game.

How To Make A Date Sign Off Tinder And Never Use A Dating App Ever Again, by OnionJokester29.

4. Make your favorite food a Tinder for purely entertainment purposes.

I'm torn between laughing and wanting to point out that making your favorite food into a Tinder personality is several hours of your life that you're never getting back.