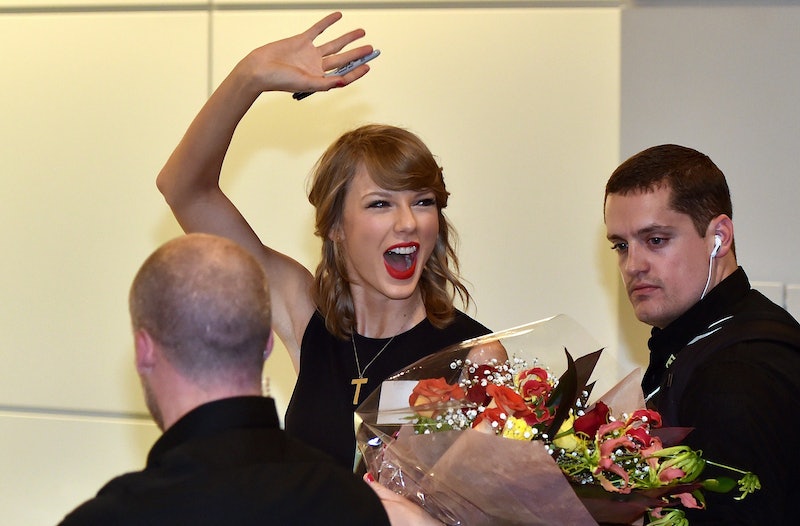 After an almost two-year break from touring, it's finally time: Taylor Swift is kicking off her 1989 tour in Japan on Tuesday, which means she's getting ready to perform tons of songs from her latest album live for the first time. And since her plane first touched down over the weekend, she's been flooding her social media accounts with posts about how excited she is for the tour to begin, and even if you're not a Swift fan, her enthusiasm is pretty contagious. For days, she's inundated her followers with photos of her and her dancers and countdown hashtags about the days left until the tour begins. As a major Swiftie, I'm just as psyched as Swift is for this tour to start, except for one problem: As an American fan, it kind of sucks that it begins in Japan.

Don't get me wrong: I'm super excited for the Japanese fans to get the first look at everything 1989. Since Swift traditionally starts her tours in America and hits other countries later in the year, it can typically be a pretty long wait for international fans to experience her famously elaborate concerts. But as I see Swift post updates about the tour, I can't help but feel a little FOMO. Why can't I be in Japan right now?!

If you're a hardcore Swift fan like me who doesn't happen to live in Japan and is super bummed that the tour isn't starting in a more convenient location, please join me at the pity party I'll be throwing all day tomorrow. Misery loves company, right? Besides, there are plenty of legit reasons why not being in Japan right now sucks.

You can't road trip to the first show.

As someone who's traveled all over for Swift, before tour dates were released, my best friend and I were planning on making a trip to the first show of the tour. After all, how much fun would it be to be part of the audience on that first night, where everything's brand new and excitement is at an all time high? But when I found out Swift was starting in Japan, my plans had to change. Since I'm not independently wealthy and do not own a car that is capable of driving through the ocean (someday!) it would be a little hard to road trip to this one.

I don't know about you, but I plan to be dead asleep at 5:00 a.m. If Swift's tour started in America, it'd be way more convenient to follow along with what was happening in my waking hours. As curious as I am about the tour, I value my sleep way more. The good news? The @Tswiftontour Twitter account is an amazing resource and will probs have all the details as soon as the rest of the world wakes up Tuesday morning.

The show in Japan might not be the same one that we get in America.

It's expensive to tour in other countries, especially when things need to be shipped and travel by plane to their ultimate destination. This means that the tour might be reworked when it hits America later this month, so what happens Tuesday may not necessarily be the show that we Americans see this summer. Which is great, since I'm all for surprises, but I'm totally prepared to rage if Swift performs one of my favorite songs in Japan and cuts it from the set list when she returns stateside.

This is a reason largely rooted in jealousy, but it's still a reason. And despite the fact that I am wishing I'd been born in Japan instead of Florida right now, it's totally fine — Swift's Japanese fans are going to have a blast, and the rest of us get to see the undoubtedly amazing tour very, very soon. Hurry up, Swift!