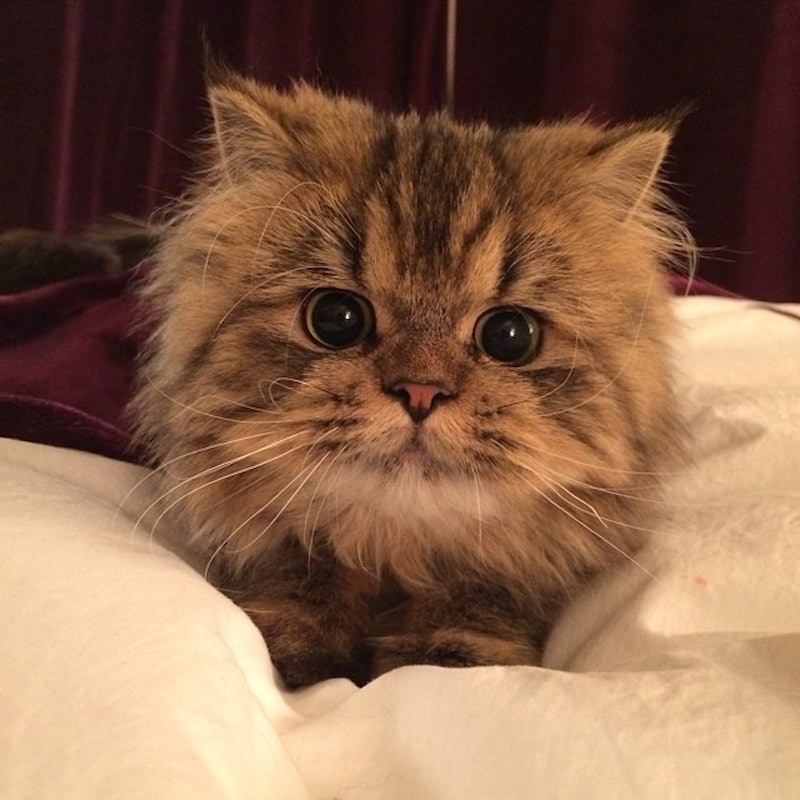 Move over, Hillary and Carly. No one ever said that America's first female president had to be human. (Well, let's not look into that.) Introducing Smushball, Instagram celeb Dan Bilzerian's adorable cat, who appears frequently in his feed amid half-naked porn stars in compromising positions and heaps of AR-15 rifles. Can you imagine the campaign signs? "Smushface 2016: We Need Change Meow." In light of the recent speculation that her owner might be running for president or vice-president, it's worth talking about why Smushball, a fluffy Persian cat who poops into a box, would make a better president than Dan Bilzerian.

First, let's get to know the little furball. Bilzerian first brought home Smushball in early 2014 and has prominently featured the feline in his infamous Instagram feed ever since. Sometimes she's swaddled in $500 blankets, sometimes she's swaddled in someone's cleavage, and occasionally Bilzerian snaps his cat sitting next to a pile of guns like she's Tony Montana. For reasons unknown, Smushball was required to undergo surgery that left her with only three legs, but Bilzerian loves her all the same. In fact, she may be his only redeeming quality.

However, having a ridiculously cute cat is not enough to make you presidential material (otherwise, I'd be presidential material). Now that Bilzerian has released his own "Bilzerian 2016" t-shirts, we're all left to dreadfully and anxiously speculate whether he's seriously planning on running for president. Here's hoping he won't, because here are X reasons why his cat, Smushball, would make a better president.

1. She's Not Into The Same Frivolous Things He Is

All she needs in this world is a soft spot to lie down in.

2. She Has Her Priorities Straight

3. She Takes Care Of Her Kind

By that, we mean other cats.

Even dogs should be treated equally.

And she's all the stronger for it.

Instead, she shares the bath with other cat friends.

7. She Doesn't Want Anything To Do With Rand Paul

"He really needs to stop calling me."

8. She's Not Into Partying

It's not her cup of tea.

9. She Has A Sense Of Humor

Imagine what she could teach America.

11. She's Infinitely Cuter Than Her Owner

If looks could win an election alone, she'd smoke the competition.

More like this
How To Support Gun Control Reform Right Now
By Morgan Brinlee and Carolyn Steber
Taylor Swift, Kerry Washington & More Speak Out On Uvalde Mass Shooting
By Jake Viswanath
Kim Kardashian's Ombré Pink Mani Features A Nod To BF Pete Davidson
By Paris Giles
Justin Bieber Just Added Another Date To His UK Tour
By Sophie McEvoy
Get Even More From Bustle — Sign Up For The Newsletter