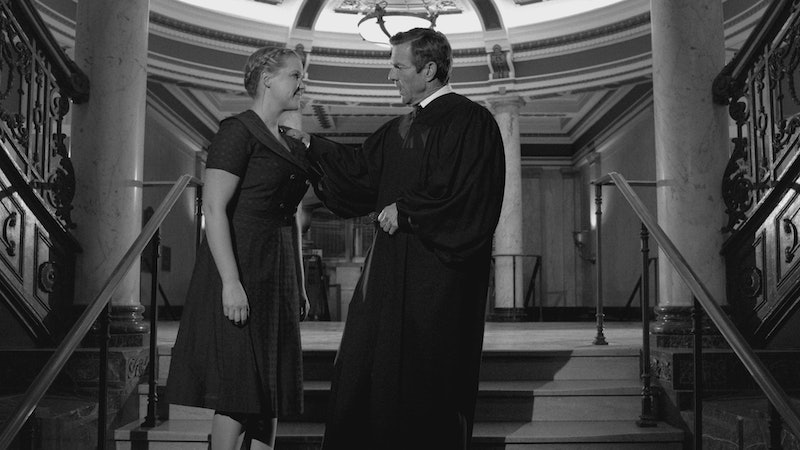 If you've been keeping up with Inside Amy Schumer this season, then you know that the season has been really on point ("Last F—kable Day" is still one of the most amazing things I've ever seen). Well, my imaginary best friend Amy Schumer has done it again, and as her BFF I'm just filled with pride. The Inside Amy Schumer episode "12 Angry Men Inside Amy Schumer" is everything Schumer has fought for satirically on her show (and in her stand-up), plopped into one full-length non-sketch episode. Yes, the question we've all (not) been wondering — "Is Amy Schumer hot enough for TV?" — is finally up to a jury decision.

The concept of "12 Angry Men Inside Amy Schumer" is based on "12 Angry Men" the play/movie we were all probably forced to read/watch in high school. It's not tremendously fun, so if you do have to read it for school, definitely just watch this episode of Inside Amy Schumer. You'll get the general gist of things. In the episode, 12 jury members are trying to decide if Amy Schumer is hot enough to be on TV, which is supposedly a terrible offense, as Dennis Quaid (the judge) makes it appear. The entire episode is so tongue-in-cheek, and I LOVE IT. Schumer is playing into this warped idea that some may think that she (and other female actors) needs to look a certain way to be "allowed" on screen... And she's calling BS, BABY.

The jury, of course, isn't filled with open-minded people from different walks of life — because it would be too easy for Amy to be "let off" after one vote. Instead, it is comprised of twelve angry men (I know, duh), who are all pretty sexist, shallow, and offensive when it comes to women's appearances. The jokes were brutal in this episode. They were also hilarious in a "Oh, they're so bad, they're good" kind of way. Here are some of the best quotes from "12 Angry Men Inside Amy Schumer."

"Let's do this fast. I've got tickets to the Adam Levine, Blake Shelton concert... It's called the Garbage Dick Tour?" - Henry Zebrowski

"We can get in a circle on the floor and give each other shoulder massages... I'm a little tight." - Jeff Goldblum

Jeff Goldblum acted as the foreman in the jury room.

"It's an undisputed fact that a woman's value is mostly determined by her looks." - Vincent Kartheiser

This one reeks of Schumer's thoughts on this ridiculous theory.

“If we decide that she is not bang-able, then she is going to lose her television show, or be put to immediate death… Or both. To be honest, I zoned out during that part.” - Jeff Goldblum

Either way, she will be punished for not being "bang-able."

YAS. MORE OF THIS, PLEASE.

“A woman talks like a sailor… That’s not hot… That’s unnatural.” - Paul Giamatti

“She’s built like a lineman and she has cabbage patch-like features. Her ass makes me furious.” - Paul Giamatti

“Am I the only one thinking with his dick?” - Nick Di Paolo

“Oh, Amy. I didn’t see you there, I thought you were a garden gnome.” - Dennis Quaid