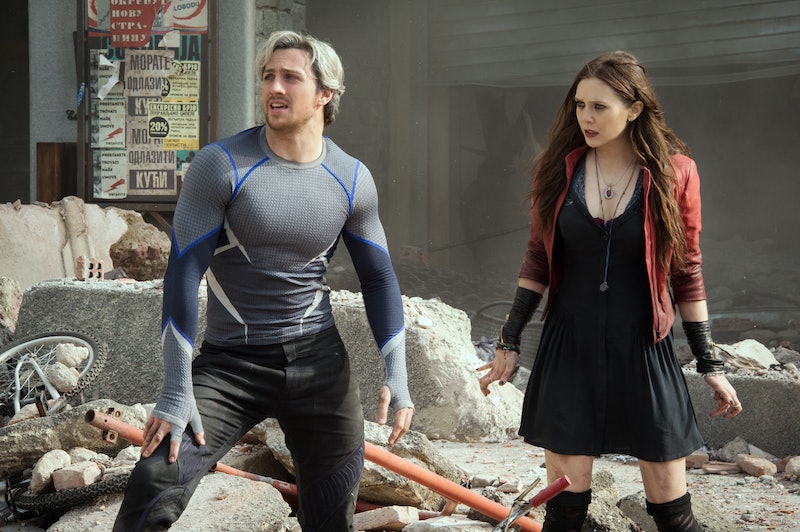 Shhh, listen. Can you hear that? It's the sound of every single Marvel fan licking their wounds after the heart-breaking end to the recent Avengers movie. (Obviously spoilers ahoy, don't say you weren't warned.) Of all the shenanigans that went down in this installment, I think it's safe to say that none of us were expecting Pietro Maximoff's death in Avengers: Age Of Ultron to twist the knife quite as hard as it did. So what's the deal, Marvel? Will Quicksilver be in the next Avengers film? I basically didn't realize I was in love with him until he was shot to pieces, because that's how sneaky y'all were with his character development (a true testament to his last words, "You didn't see that coming"). I mean, come on, Joss Whedon! He didn't even get his classy superhero name yet! Somebody could have at least nicknamed him before you let him croak.

But here's the thing: I refuse to go through all five stages of grief for Pietro's death. I am, in fact, planted quite firmly in the "denial" stage. I don't think this is it for him and I will fight you if you think otherwise. That or I'll just write a really lengthy article about how and why Marvel should bring him back, because let's be real, I'm no Black Widow. Without further ado, here are all the compelling justifications for Quicksilver's return:

1. It's not like Marvel hasn't brought someone back from the dead before

Getting gutted to death and coming back to life is a rite of passage in these movies. Nick Fury got axed and came back to life in an hour. Phil Coulson died a horrible guilt-squelching death and got his own damn television series. If Marvel can convince us that the two of them survived the literal carnage they went through, then finding some way to magic Quicksilver back to life shouldn't be too hard.

Which might, in turn, mean that he has rapid healing abilities that were just starting to kick in when the camera dramatically panned away from S.H.I.E.L.D.'s rescue ship. Biology, guys! Science...and stuff! No, YOU'RE overreaching with a fan theory.

3. They have a magic Cradle and Helen Freaking Cho

That's right. MORE science. You thought my theories were going to be baseless and inane? Well, you're only half right, because this one at least has some solid sense behind it. If they could rush him to the Cradle fast enough, they might be able to fix him! He was only shot, like, one or six times. In any case, if that tissue regeneration machine managed to pop out the entire superhuman/android that is Vision, then why can't it fix a few bajillion bullet wounds, huh?! HUH?! (Hold me.)

4. The "You didn't see that coming" motif isn't dead yet

Marvel doesn't just make jokes, guys. Even three centuries after the horse that they are beating is long dead, they will still be making jokes about Cap saying "LANGUAGE!" in the first scene of Ultron. Don't tell me they'd pass up an opportunity for one more ultimate "You didn't see that coming," back-from-the-dead style. Quicksilver: Too sassy for this world.

5. Some mumbo jumbo with the infinity stone

JARVIS/Vision can fly, so yeah, he's got an impressive skill set. And he seems to really like humans. Maybe he could just give Pietro a friendly head butt and use the infinity stone to kickstart his heart? If there were ever a time to call in a favor from the insanely powerful android you brought to life, this would be it. Plus, he already saved one of the Maximoff twins, so we know he's got a soft spot for them. (Besides, saving Wanda's brother is so much more romantic than a first date, if Marvel decides to go canon with Scarlet x Vision like I desperately hope they will.)

6. There are ~rumors~ that Aaron Taylor Johnson is signed on for more than this movie

And this isn't a situation where the Human Torch magically comes back to play Captain America. If he comes back, he'll have to come back as Quicksilver. (Please oh please oh please.)

You heard Cap. NOBODY DIES ON THIS FANGIRL'S WATCH. Looking forward to seeing Quicksilver in Avengers: Infinity War in 2018!!!!!!!!!! (Don't look at me.)