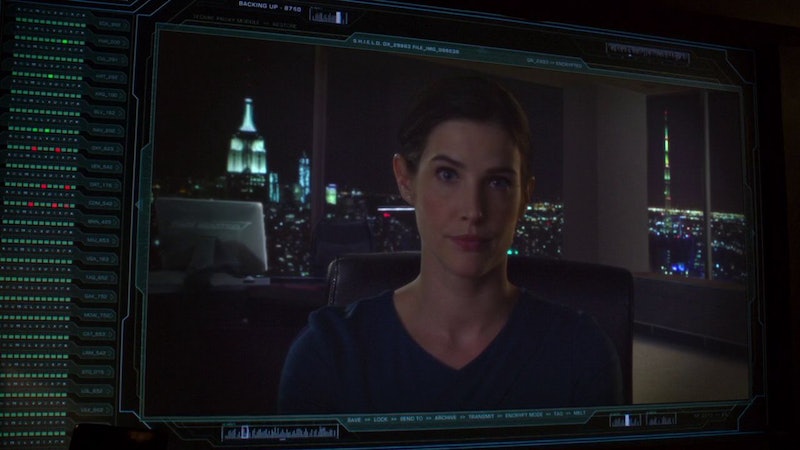 In the golden age of transmedia universes, Easter Eggs have become a staple. Nerds like me are on high alert for references in whatever we're watching. So imagine my surprise when I found very few references to Agents of S.H.I.E.L.D. in Avengers: Age of Ultron. While the series set us up for the film, the film gave little indication of what is to come on the series. That's not the worst thing in the world — Iron Man 3 and Thor 2: The Dark World did not affect the show as much as Captain America: The Winter Soldier.

There was no mention of there being other "enhanced" individuals in the world like Wanda and Pietro Maximoff as we've seen on the show. It seems that the Marvel films aren't quite ready to introduce Inhumans yet. I suppose that's fine, because the Avengers are their own thing. The first movie was about them working for S.H.I.E.L.D. and now not only is the group dealing with a problem that they themselves created, but the S.H.I.E.L.D. they once worked for no longer exists.

That said, there were a couple nods to the universe that we visit weekly on our small screen. If you didn't catch them, here they are. There are a lot of movie spoilers ahead, as there are sure to be when Agents of S.H.I.E.L.D. returns on Tuesday night. So don't read on if you haven't seen the film, OK?

It's All Because of Coulson

As fans of the ABC series know, the entire movie kicks off on Coulson's orders. He was playing both sides of S.H.I.E.L.D. off of one another so that he could find Loki's scepter and send the Avengers in to retrieve it via Maria Hill. The Avengers may not know that Coulson is alive, but he's still pulling their strings — no Ultron pun intended.

At the climax of the film, Nick Fury and Maria Hill come to the rescue of the Avengers with a hellicarrier that they use to evacuate Sokovia before it is destroyed. It's filled with a bunch of rough, inexperienced Agents. Who were these guys? Were they Coulson's S.H.I.E.L.D.? Were they "the real S.H.I.E.L.D." or even "the real real S.H.I.E.L.D." that I just made up? I'm dying to know who these Agents are and how they managed to scramble together a crew and a hellicarrier.

I understand that there are conflicts when it comes to making a film and television universe seamless. Before Agents of S.H.I.E.L.D. and Captain America: The Winter Soldier, the only movie that connected to a television show in that way was The Rugrats Movie. This stuff is groundbreaking and I should not complain. Still, it would have been nice to see at least a minor S.H.I.E.L.D. character in that rescue scene for continuity's sake. Hopefully, this will be addressed on Agents of S.H.I.E.L.D. this week.

Nick Fury says that "one of his tech guys" discovered the Hulk's escape plane in the ocean, indicating that he's hiding on an island somewhere. I'm going to put my many feelings about Bruce Banner aside for a moment and speculate that that Fury was talking about Leo Fitz. He is a tech guy with a high enough clearance level. We know he has a close relationship with Nick Fury, both on the show and in Winter Solider— he developed the "Mouse Hole" tech that Fury used to escape Bucky. I'm just saying.

Guys, was the end of Age of Ultron showing us Theta Protocol — IS THIS THETA PROTOCOL???? At the end of Age of Ultron, Natasha Romanov and Steve Rogers were given a facility in Upstate New York (which has to be an X-Men homage) to train new Avengers. We know that Coulson was building a new facility. We know that he ordered a bunch of bunk beds, like you do. We know that Maria Hill wanted to know if Theta Protocol was ready, and Coulson's answer was tied to the Avengers. Could this be what he was building? What exactly is this place? Is this setting us up for Skye and Deathlok becoming Avengers?