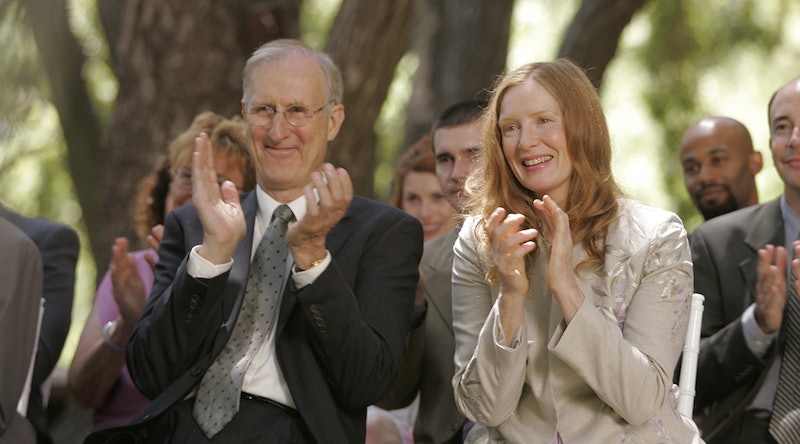 Making a personal assertion about Mother's Day feels a little daunting, especially because my mom always sees what articles I post (even though I explicitly ask her not to!) so she will probably call me to tell me how skeptical she is about this piece. But, as an obsessive TV-watcher, I know that consuming amazing television can lead to an emotional breakthrough. So I'm being totally serious when I say I truly think recently watching every season of HBO's Six Feet Under made me a better daughter. Seriously.

After moving across the country from the rest of my family a year and a half ago, basically the only way I've talked to any of them has been on the phone — not my preferred mode of communication. But for months after I moved, I couldn't bring myself to call home before I reached a suitable milestone that felt like enough of an "event" to call. But you can't compartmentalize humans like tasks, and while it had been a dawning realization for a long time, watching Six Feet Under made it even clearer easier that avoiding my mom was doing the relationship no favors at all.

And with good reason. Six Feet Under follows the Fisher family, who own and operate a small funeral home, as they come to terms with the death of their family patriarch, Nathaniel, and the seismic emotional shifts it causes in their lives. It's one of those shows that's well-regarded among TV lovers, especially for its final montage (below). It's not pored over the same way other HBO series like The Sopranos or The Wire are, likely because it spends its time with three self-involved kids, their deeply conflicted mother, and a ghost rather than gangsters. Now, don't get me wrong: It's not that I looked at Six Feet Under and saw really any surface-level similarities to my life — I'm from the East Coast, we don't have a family business, my mom is reasonably well-dressed — but the themes of the show and the struggles of the characters are so distilled that the character relationships often feel disturbingly akin to my own relationships. And these connections have really, truly affected me.

...you can't put your parents in cold storage until you have other parts of your life in the perfect place.

The show (hopefully) helped me be a better person, in general (a better girlfriend, a better ghost after I die, etc.), but there's something so unique about Six Feet Under matriarch Ruth Fisher (above) that's made me reconsider my mother-daughter relationship.

Ruth is a wonderfully written mother figure: She represents all of the sacrifice and selflessness of having children, but also the deep-seated resentment from the expectations that were put on her from the startlingly young age at which she got married and became a mom. Her journey to find happiness may have started late, but it's really no less tumultuous than the growing pains of being young. Ruth led me to a seemingly simple, but all important conclusion: Parents are people too.

Rather than being a shocking, TV-ready realization, though, it was more of a mounting feeling like: Hey, maybe every logical person on Earth is right, and I need to pick up my germ-ridden iPhone and call my mother for once in my GD life. Thankfully, I think things have improved with even that tiny action. I mean, for the most part all we talk about is breakfast, but that is not just the most important meal of the day, but something that always reminds me of my mom. But more to the point, I can't undo the fact that I missed out on half a year of those conversations — because you can't put your parents in cold storage until you have other parts of your life in the perfect place.

You are given life, and you try your best to give it back.

Accepting this concept also meant accepting that our mother-daughter relationship will always be in a constant state of change. I can't just decide to call more often and call it a day. In fact, my evolving relationship with my mother (and really all of our evolving relationships with our mothers) is something that can be easily tracked in Six Feet Under by looking at all three children: They are each a different representation of the same relationship, separated only by the level of give and take between mother and child. At least, that's how I see it.

Nate: The Selfish "I Just Need To Be Me" Phase

Sadly, I am in my Nate-phase right now, as both the oldest in my family and the one living far from home. I say "sadly" because even though he's the protagonist of the show, Nate is a total jerk. He has that "just let me be meeeee" instinct, the drive to strike out and away, and become his own person. And there's something about that desire for independence that draws mother to son so strongly.

Realizing my inner Nate-ness made me more conscious of how painful the split from your parents can be for both parties. And while there will be conflict, all of the things that feel so urgent in the moment will hopefully fade away as you get older. Personally, I can debate things for an infinite amount of time. I've had hours-long arguments about pizza. So I cringe sometimes to think about how many drawn-out, circular yelling matches I've had with my mother about things that I literally can't even remember now (they were probably all about breakups that didn't even wind up happening). And while the blame is on me for so many self-involved pity sessions in the first place, sometimes when my mom was playing along, it was because she was waiting for me to grow out of it.

Bottom Line: Call your mom. And it will not kill you to focus on her instead of yourself.

David: That Moment When You Think You've Got It All Figured Out

Settling into an adult friendship with your mom is super weird, and maybe impossible. You have to consider awkward things you never thought about before, like talking about your romantic relationships. It defies every secret diary-scrawling instinct of the teen years, and it can make you feel very self-satisfied: I beat this growing up game! I am perfect now! I know that's how I feel every time my mom says I said something "insightful."

That said, it can so easily shift and turn into a form of codependence and arrested development (hey, another show with an amazing mother). But as Michael C. Hall's David moved on and moved out of the Fisher house, his relationship with Ruth did get more distant. That when I realized that it's impossible to maintain that Lorelai/Rory Gilmore level of closeness and have an independent, healthy life. It's bittersweet, and the show doesn't provide any solution, probably because there isn't one. Mother-child relationships are complicated and maintaining independence is both difficult and necessary. That's just how it is.

Bottom Line: Call your mom, but you probably don't need to call three times a day. You both need to be your own people.

Claire: The Teen Angst Phase You (Mostly) Grow Out Of

Claire Fisher is one of the best portrayals of a teenaged person, probably ever. Not only is actress Lauren Ambrose capable of selling pretty much every line she's handed — even the ones that make her sound like a huge brat (because like any teen, Claire can be a huge brat) — she also goes through the biggest evolution on Six Feet Under.

Claire's entire arc is about growth and change, even more than her siblings, so it's suitable that her relationship with Ruth is incredibly tumultuous. By far the best representation of this change is the money she has in her trust: In the first season, Ruth keeping it stashed away is indicative of just how far Claire has to go while her authority figure Ruth is floundering, but trying to do her best. But by the end of the series, Ruth's knee-jerk instinct to hold the money away as a punishment is all wrong. Claire needs her freedom to grow up and away, with all the maturity that Nate lacked and with the closeness that David had trouble maintaining.

And Claire's last dialogue with Ruth just before the series' closing montage stands out because it's such a simple distillation of what a positive relationship between a mother and child is: an exchange. You are given life, and you try your best to give it back. Personally, I constantly wish I could give back to my mother in a more significant way than just a phone call, but you can't wait for the chance to make a huge statement. Waiting for a "better" moment to express care only expresses the opposite. You can't opt in and out when convenient — that's the inner Nate coming out.

While you're not finished with your parental relationship until, you know, you die — the theme of Six Feet Under — you also don't get unlimited time with your mother (or with your father). Waiting for the right moment only pushes you further apart.

Those final, tranquil moments of Six Feet Under, in which saw the characters' eventual deaths wasn't just heartbreaking, it was also life affirming. It showed how far their relationships had come and proved to me that my own still has so much room left to grow.

If you're lucky, you can express that appreciation all kinds of ways. But, for the time being, I'm going to have to make due with a phone call. Don't shy away from doing the same thing.

More like this
Ashley Judd Wrote About Late Mom Naomi, Choice, & Motherhood In A Powerful Essay
By Grace Wehniainen
Jennifer Lopez Found The Perfect Ben Affleck Throwback Video For Mother’s Day
By Stephanie Topacio Long
'Heartstopper’s Joe Locke Has A Sweet Message For Queer Fans
By Sam Ramsden
Thoughtful Mother’s Day Jewelry That’ll Hit Mom Right In The Feels
By Avery Matera
Get Even More From Bustle — Sign Up For The Newsletter