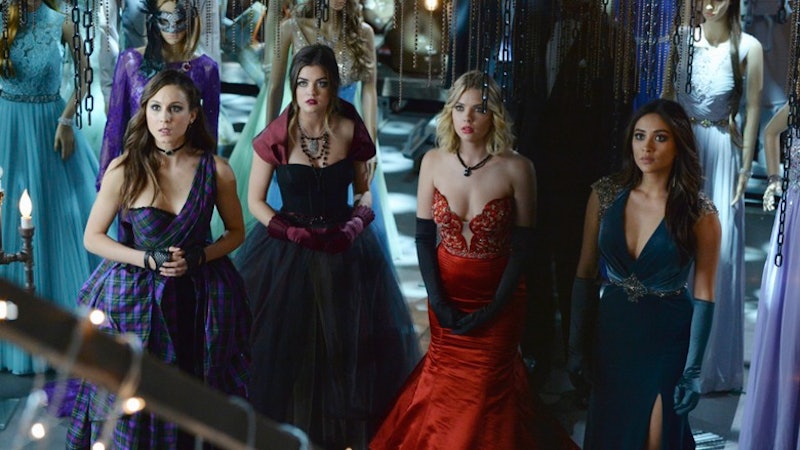 When Pretty Little Liars begins Season 6, we'll learn what happened to the girls while they were trapped in Big A aka Charles' dollhouse. Needless to say, it probably won't be that pretty, or that much fun, for Aria, Hanna, Spencer, Emily, and Mona (who's still pretending to be Ali). Last we saw them, they were busy trying to recreate a Rosewood prom night from seven years prior, down to the theme and the haunting tune of Natasha Bedingfield's "Unwritten." Judging from the newly released Pretty Little Liars promo for Season 6, that won't be the only throwback that Charles insists upon. So now the big question I have for this Big A is simple: Why is Charles stuck in the past?

This new promo — which I'll include below — is barely 30 seconds long, but it packs a lot of punch. The girls are trapped; the girls need to band together to save the day; the girls are threatened; the girls see scary carvings in one of the walls about killings. You know how PLL does it. But there's one thing in this promo that really stands out for me, and it has to do with Aria: Aria appears to have pink streaks in her hair, which is something we haven't seen her rock since Season 1. First, check out the promo:

Creepy? Hell yes. But Aria's hair. It's nagging me in just the right way, that I think it's got to mean something — and obviously it has to do with Charles. Combine the fact that Aria's got streaks in her hair, and the fact that Mona's wearing the same outfit that Ali was wearing the night she disappeared, everything points back to this fateful night. I'm also willing to argue that Spencer is wearing the same kind of cardigan, though a different color, that she was the night Ali disappeared. There's no way this is just a random thing, especially for Big A to pull.

Something happened the night Ali disappeared, and while we have a lot of pieces, we don't have all of them yet. What we do know is that the girls got together to have a sleepover, and midway through the night Spencer heard a scream, and Ali was gone. Earlier that evening, Mrs. DiLaurentis got a phone call, and told Ali not to go out (she went out anyway, obviously). We can speculate that all of these things point to Charles, but nothing's been confirmed about it yet — and speculating about these things will only pull us deeper into the PLL rabbit hole (trust me, I've been there for months now).

But that still doesn't explain why is Charles stuck on this night in particular.

Sometimes people suffer a traumatic event, and instead of reliving the events again and again, it's blocked from their mind completely. As a result, they can live in the moments surrounding it forever and ever. This state is a form of amnesia, and the one I'm thinking about is called anterograde amnesia. Basically, it's hard for a person to form new memories, but prior memories stay intact. This is all due to some sort of sustained head trauma. What if Ali wasn't the only one hit on the head the night she disappeared? Isn't it possible that Charles was hit, too?

The actual events of that night are still a little bit sketchy for everyone, and there's no real set timeline of events as to what happened (at least, not yet). Let's say that Charles — wherever he was — came back to Rosewood that night, something happened, something else happened, something something ELSE happened, and in the end, he was struck on the head (that'd also maybe answer theories as to why he's always wearing a mask — he's injured). That's why he's so hung up on this night, with these girls, in these outfits and with pink hair.

Or maybe he wasn't struck, and there was some other traumatic event in Charles' past that left him stuck in the past mentally. Either way, it's forcing him to force the girls to dress and appear like they did way back when, because for him, that's still the reality he's living.