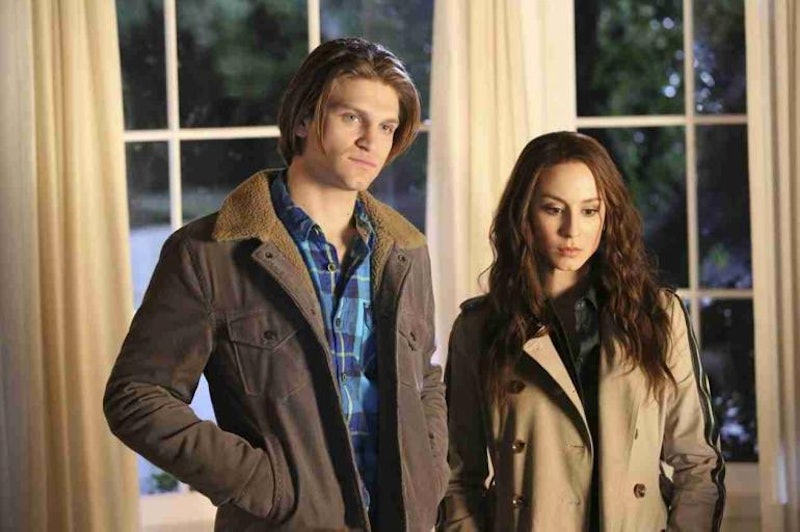 The hashtag du jour for Pretty Little Liars is "Summer of Answers." Clearly, the show is going to start dropping major truth bombs as it wraps up the the Big A mystery, and that includes everything about Charles. However, that's not the only mystery that needs to be solved. Remember a little mystery called, "hey, whatever happened to Marion Cavanaugh at Radley?" That's still something I still need answered, and I bet Toby would like a few things cleared up, too. There are all sorts of loose ends related to this mystery, and it's time to start sorting them out — including my hunch that Bethany Young might be involved in Toby's mom's death. She just might be a key to figuring this whole thing out.

If you need a quick refresher on Marion, here goes: She was Toby's mother, and she suffered from depression, which is how she wound up in Radley. It was always believed that she committed suicide during her stay at Radley, and she did this by jumping off one of the roofs of the building. However, that's not the real story.

According to what PLL has told us, Marion's death was was no suicide. Somehow, Marion and another mysterious patient got out onto one of the Radley roofs, and the fact she fell to her death was a sheer accident. Marion never meant to jump, and no one intentionally pushed her. Radley, trying to cover their tracks and avoid a nasty lawsuit, claimed that it was a suicide so probing questions weren't asked.

Spencer, always the sleuth and doting girlfriend, tries to get to the bottom of this mystery, only to uncover this whole cover-up. She also uncovers something else: there was a blonde girl at Radley, and Marion was advised to stay away from her. According to one of the doctors there during this time, the blonde girl had a "bad air" around her. Aside from the fact that this girl has blonde hair, and she was probably the one on the roof with Marion at the time of her fall, not much else is known about her. Might it be Bethany?

The big clue for this lies with Bethany's Radley artwork. Bethany liked to draw, and not only did she once draw a terrifying picture of Mrs. DiLaurentis, but she also once drew a picture of a woman falling.

It's not even a guess to say that's Marion. That woman in the picture is totally Marion, unless Radley has a HUGE problem of people falling off roofs. More than likely, as some sort of therapy coping method, Bethany drew this picture following Marion's death. It might have freaked her out so much, the only way for her to get her feelings out was to sketch it.

I also can't help but notice the background colors of this sketch. Yes, it's done completely in black and white (pencil? pen?) but notice how the woman goes from the darkly shaded area into the light part?

Let's just, for a second, believe that Marion and Bethany were on the roof that night. OK, now let's also assume that the whole thing wasn't a suicide, or an accident, but intentional. Now I'm going to suggest that Bethany was actually the one who pushed Marion off the roof, because she thought she was helping her. She thought she was helping her escape whatever demons were lurking around, and in falling she traveled through the "bad air" to the good air. So yeah, it was technically a murder, sure. But Bethany thought she was doing something right. Maybe all Bethany was trying to do was help someone else out, since she couldn't escape her own "bad air" herself.

To try and tie in the reason she was out of Radley on the night of Ali's disappearance, maybe she was going to try to confess what she had done? It was an accident, yes, but I like to think that no matter what was going on inside Bethany's head, she knew that she had done was wrong. Not knowing many things about Rosewood — let alone where she could find Toby — that's why she ended up in the DiLaurentis backyard. She was looking for someone she already knew, Mrs. DiLaurentis, to help her out. And that's when everything fell apart.

This is still all speculation, no matter how we slice it. It's never been confirmed that Bethany is the blonde girl at Radley, let alone that she was the patient with Marion. All these loose ends just make me think that she MUST tie into this greater mystery somehow, and the pieces for her involvement are already laid out. Now, we just need a summer full of these PLL answers.