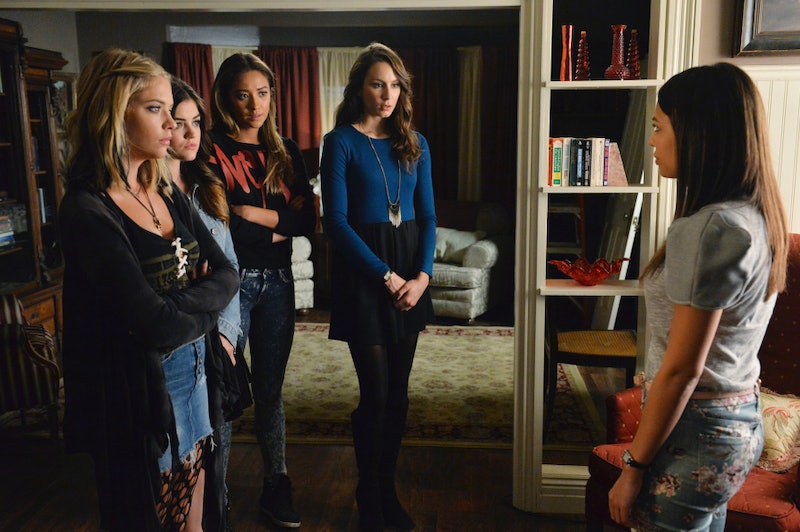 I'm not naive, OK? It’s not like Pretty Little Liars fans get much in the way of answers to the show’s greatest mysteries (I. Marlene King loves to torture us), but there are definitely a few plot points that have drifted off into the ether, never to be seen again. Will they ever become important again? Are they tied to what's going on with Charles now? During a recent rewatching marathon, I experienced this phenomenon during the Pretty Little Liars Season 2 finale, “UnmAsked” — aka the one where find out Mona is A. There are so many subplots that have been abandoned since that finale that I found myself wondering if I was watching the same show. After all, a lot has happened since that fateful reveal.

To recap for those who aren't as obsessed as I admittedly am, the Season 2 finale was the episode in which we find out Mona is A, Maya is dead, and Garrett “murdered” Ali. Also in that episode: Ezra has fled school property because of his affair with Aria; the “Jenna thing” is coming to a head; Toby and Spencer are at odds because of the “Jenna thing”; and Melissa is pregnant with dead Ian’s baby. So, um, yeah, a lot has changed. Now that we’re almost in Season 6 (come on, June 2) and it feels like so many of these plots have been completely forgotten. I'd wager that the show has dropped all of them, in fact.

Here are some more formerly huge plot points that have been long-gone (but not necessarily resolved) as of Season 6. You never know what might happen with this show, it's probably good that we don't forget this stuff entirely:

In “UnmAsked,” the liars are really focused on page five of Ali’s autopsy, which is the page that Jenna gave the police to implicate Garrett in Ali’s murder. Jason, Garrett, Ian, Melissa, and CeCe all have ties to this mysterious group, but we still don’t really know what exactly they wanted and what they have to do with Ali’s disappearance. They just seemed to film all the girls in Rosewood, which is creeptastic and gross. Ian and Garrett are dead, so will we ever find out the true intentions of the N.A.T. club?

What Happened With The Jenna Thing?

In a nutshell, the liars accidentally blinded Jenna when they threw what they thought was a stink bomb (it was a firecracker) into Jenna’s garage. Ali thought they were punishing Toby (who she thought was peeking into her window), but they hurt Jenna, and in the first few seasons, the girls lived in constant fear that they would get ratted out. As of late, though, we have barely seen Jenna and haven’t heard a peep about the “Jenna thing.” Maybe the liars have bigger fish to fry now that they know who A is?

Why Does Pretty Little Liars Love Masquerades SO MUCH?

How many masked balls have they had on Pretty Little Liars? One or two a season? Of course they don’t know who A is — no one actually shows their faces in Rosewood. No wonder why Caleb left for Ravenswood: He wanted to be able to see someone’s nose and eyes at the same time for once in his life.

Why Aren't The Girls Still In Therapy?

The girls saw a therapist in order to work through their many “A” issues, but when Dr. Sullivan started getting threats from A, she bailed. Somehow, I don’t think that the girls should be done with therapy, considering A is still torturing them. I mean, do any of the liars even sleep anymore? When they get out of Charles’ doghouse, they should re-enroll with Dr. Sullivan.

Of course, for everything that we don’t know, there are also a few constants in Rosewood.

Are We Supposed To Root For Ezra & Aria?

In “Unmasked,” Aria tells her friends that “it might really be over this time.” Yeah, OK, Aria. We know better, especially now.

Why Is Melissa Always So Creepy?

Here’s something I noticed: When Mona is locked up in Radley and talking to herself, she makes a note that her lipstick shade is called “Toffee Tango.” Earlier in the episode, Melissa points out how much she loves toffee ice cream and steals Aria’s cup. No one talks about toffee that much, so something's gotta be up: Could Melissa still have a link to A? Is Melissa A’s helper?

Will any of these plot lines get resolved? Maybe Season 6 and the additional of Charles will dig up some more of the past. Are you listening, Ms. King?