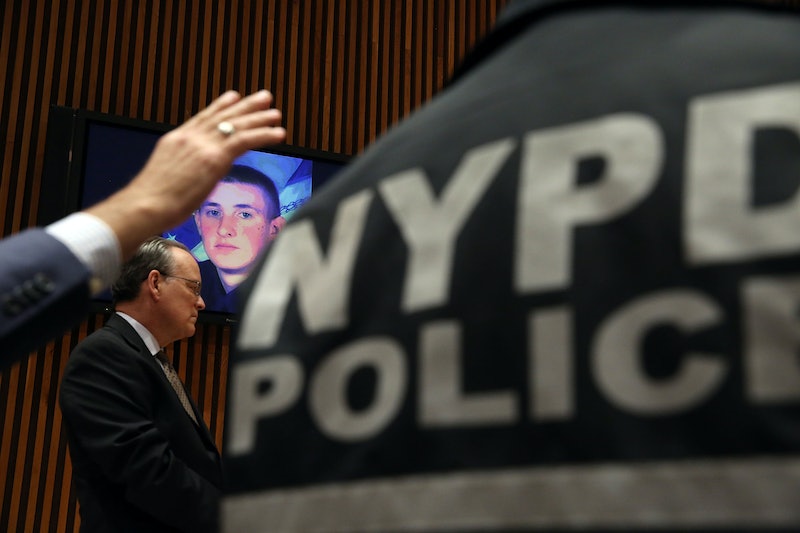 On Saturday evening, a New York City police officer was shot in the head, and on Monday died after his family took him off of life support. His death, at the young age of 25, was a tragedy for both his loved ones and the city, but who was NYPD officer Brian Moore?

Despite his youth, Moore had earned distinction from his superiors and departmental medals for his exemplary police work, rising through the ranks of an elite plainclothes force since joining the NYPD in July 2010. In an emotional statement on Monday outside Jamaica Hospital where Moore was on life support, Police Commissioner William Bratton told reporters that the young man was a remarkable officer:

It’s with great regret and sadness that we announce the passing of New York City Police Officer Brian Moore ... In his very brief career, less than five years, he had already proven himself to be an exceptional young officer. In that career, he had made over 150 arrests, protecting and serving the citizens of this city. He had already received two exceptional police service medals and two meritorious police service medals. We don’t give them out easily.

I did not know this officer in person in life. I’ve only come to know him in death.

Moore hailed from a police family — his father, uncle, and cousin were also NYPD officers — and grew up in a middle-class Long Island neighborhood, where many in the community traveled to the city for work. Moore attended Plainedge High School in North Massapequa, where the athletic field was named after Edward R. Byrne, another alumnus whose death Moore's own echoed. Byrne, according to The New York Times, was an NYPD cop fatally shot in 1988 while on duty in Queens as a 22-year-old rookie.

The newspaper also reported that Moore's family name sometimes preceded him in his department — Byrne's brother Lawrence, a high-ranked officer, knew Moore's father, Raymond, from high school and had worked with him in the department in 1990s.

As a teenager, Moore had already known that he wanted to follow in the footsteps of his father, said his neighbor, Don Crummy, whose son was also an NYPD officer:

On Saturday, Moore and his partner, Erik Jansen, pulled up behind suspect Demetrius Blackwell in their unmarked squad car after spotting Blackwell "adjusting an object in his waistband," NPR reported. The cops tried to question him, but Blackwell allegedly opened fire on their vehicle, and a bullet went through Moore's face. His injuries were grave, forcing him to undergo emergency brain surgery that put him in a coma.

His death is another painful loss for the NYPD, less than six months after officers Rafael Ramos and Wenjian Liu were killed in the line of duty in December. Charges against Blackwell reportedly will be upgraded from attempted murder to first-degree murder.

According to the New York Post, as Moore's body was transported in an ESU truck to a morgue in Manhattan, accompanied by a full police escort, hundreds of New York City police officers stood by and saluted. Distraught bystanders, some believed to be his relatives, reached out to the vehicle. Firefighters at every station along the route stood and saluted, The New York Times reported. In Massapequa, Long Island, neighbors and friends left flowers and gifts of condolences at Moore's doorstep.