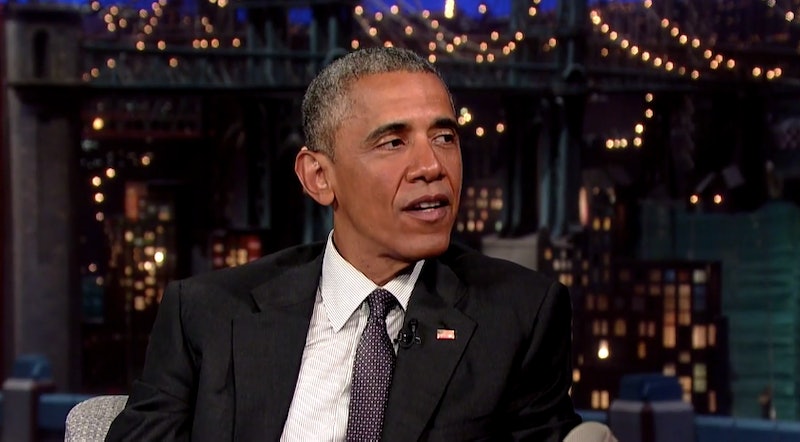 In what will be his final Late Show appearance as commander-in-chief, President Obama talked about Baltimore with David Letterman Monday and offered his solution to tense race relations that have become a major social issue in the country. Obama previously discussed Baltimore during a press conference last week held in honor of Japanese Prime Minister Shinzo Abe. But it was great to hear POTUS talk frankly about what's been in happening Baltimore in a casual setting like a late-night show.

Obama began by acknowledging the latest news coming out of Baltimore, that the six officers involved in Freddie Gray's death were charged with various offenses. It's easy to forget Obama's legal background and his life before the White House. Not only was he a practicing lawyer, Obama taught law at the University of Chicago Law School for 12 years, up until he ran for senator of Illinois. On the Late Show, Obama called for due process and put his faith in the legal system.

It is important that now that charges have been brought in Baltimore that we let the process play itself out. Those officers have been charged and they deserve to be represented and to let the legal system work its way through. We don't have all the facts yet and that’s going to be presented in a court of law.

Obama acknowledged that a "handful of police" who aren't doing the right thing while on the job can make it more difficult for the officers who are working to protect and serve the community. But he insisted that what happened in Ferguson, New York, and Baltimore weren't just problems related to the police.

This is not just a policing problem. What you have are pockets of poverty, lack of opportunity, lack of education, all across this country, and too often we ignore those pockets until something happens. And then we act surprised and the TV cameras come in and essentially we put the police officers in a really tough spot where we say to them, "just contain the problem."

So what's the message that Obama is trying to say? He praised the use of cameras and technology to help bring light to the issue, but according to him, this crisis has been going on for years. The best sustainable solution, he argued, is to work on the social and economic level by making education more accessible and helping young people in poor communities get good jobs.

We still have racism in our midst. We still have problems of ignoring poverty in our midst. Kids are locked in situations where it’s very hard for them to pull themselves out unless they get some help, and the more we’re aware of it, we can solve it.

Does Obama think the country can fix this problem? Definitely.

The one thing I know about America is that when we decide to solve a problem, we can solve it.