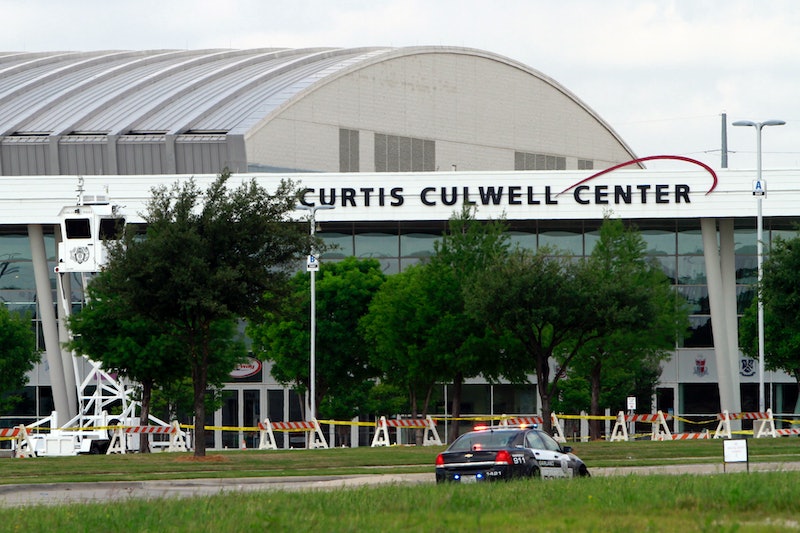 More details are emerging about the two gunmen who allegedly planned a terrorist attack on the Curtis Culwell Center in Garland, Texas, Sunday afternoon, where a Muhammad-drawing contest was taking place. According to a report from The New York Times, one of the gunmen, 30-year-old Elton Simpson, was once at the center of an FBI inquiry. The federal security agency had previously identified Simpson as a suspected jihadist, and had placed the American-born man under surveillance for several years.

The Times reported that Simpson was convicted in 2011 for lying to federal agents after an investigation roughly five years ago revealed that he had made plans to travel to Somalia, allegedly to join in terrorist activities. However, a federal judge ruled that prosecutors couldn't prove that Simpson indeed had plans to partake in jihadist activities — although prosecutors could prove that he had plans to travel to Somalia — so part of his charges were dropped. Instead of going to federal prison, Simpson was given three years' probation.

But federal court documents show that Simpson was under FBI surveillance way before those charges were brought against him in 2011. The FBI reportedly had Simpson on its radar since 2006 — and had been monitoring the Islam convert for nearly a decade. The Guardian reported that federal agents were keeping tabs on Simpson because of his social media presence.

However, the FBI has said that it did not know about Simpson's plan to stage a mass shooting at the Muhammad-drawing event in Garland on Sunday. Simpson was killed by police in a nearby parking lot, along with gunman Nadir Hamid Soofi. Both Simpson and Soofi lived in Phoenix.

On Tuesday, members of the Islamic State of Iraq and Syria claimed responsibility for Sunday's botched terrorist attack in a broadcast on its official radio channel. ISIS called the two gunmen "brothers," and apparently warned the United States of more terrorist attacks to come.

We say to the defenders of the cross, the U.S., that future attacks are going to be harsher and worse. The Islamic State soldiers will inflict harm on you with the grace of God. The future is just around the corner.

It's unclear at this time if Simpson and Soofi had ties to ISIS or other international extremist groups. The U.S. government and the White House have yet to confirm the validity of the ISIS claim.