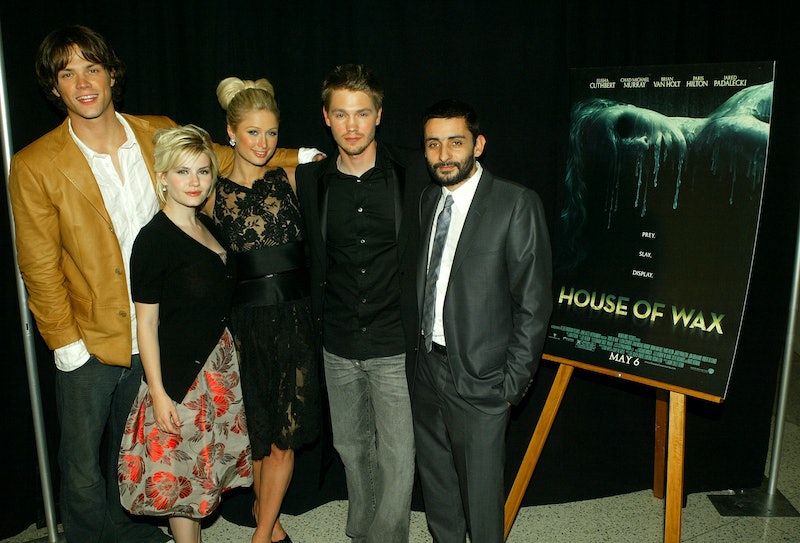 House of Wax. The film that gave us Paris Hilton's foray into horror movie acting and showed us that wax museums are more dangerous and creepy than we could have imagined, celebrates its 10th anniversary this year. While re-watching House of Wax and remembering of all its good and so-bad-it's-good moments should most certainly be on the agenda in celebration for this momentous occasion, I also decided to do some research on the movie and find tidbits that are relatively unknown about the production.

From learning Paris Hilton's secret acting tips to finding small homages the film, House Of Wax is so much more than the movie that killed Paris Hilton, harmed the beautiful man that is Jared Padalecki and introduced me to new and truly horrifying ways to kill people. But isn't that the mark of a truly entertaining horror film? Whether the quality is able to stand the test of time or garners the most critical acclaim, a good horror movie should allow audiences to discover new tidbits about it during every single watch. It should give us something to explore long after the movie is finished, that makes us want to keep coming back for more.

One Of The Film's Taglines Capitalized On Its Star

The tagline, "On May 6th: See Paris Die" became popular for the film and Warner Brothers supposedly gave Hilton permission to use the tagline to sell T-shirts before the film's release. It's kind of cool actually that Hilton was so game with this line that was created specifically to drum up a large audience.

The Villain Has A Memorable Name

The main villain in House Of Wax is named Vincent which is most likely an homage to the 1953 film upon which the movie was based. That film starred horror movie legend Vincent Price as the lead character/villain.

You'll Never Guess Where The Movie Was Filmed

Australia. Strange considering the town in which the film takes place feels so Southern.

A Fire On Set Creepily Mirrored The Movie

In 2004 during production of the film, the Warner Brothers set in Australia caught fire. The fire brought on a $7 million lawsuit against the special effects expert on set for not having firefighters standing by and other details of negligence. The fire's supposed culprit? A candle. Eerie, right?

The Wax You See Onscreen? Not All Wax

The film used a mixture of peanut butter and wax for the scene featuring the melting wax bed in the museum where Cuthbert's character Carly and Chad Michael Murray's character Nick try to escape Vincent. In the behind-the-scenes commentary and moments from the DVD, Cuthbert & Murray kept getting stuck in the bed and lamented about how difficult this was to shoot over and over again.

Hilton apparently was so embarrassed about her scream during her death scene that for several takes of the film, she had members of the crew scream with her.

Cuthbert is significantly shorter than her House Of Wax onscreen boyfriend Jared Padalecki, a whole foot shorter to be more accurate. But for those who have seen the film, have you noticed that the height difference really isn't that obvious? That's because Cuthbert had to tape wooden blocks to her shoes so she could appear taller. The extras on the film's DVD show the makeshift wooden block shoes and it's awesome.

Paris Hilton Is A Method Actor

According to the House Of Wax DVD commentary, Hilton stated that she ran up and down flight of stairs to simulate being out of breath in her chase sequences before her death scene in the film. Real is better than fake, right?

Is This An Homage To An Iconic Masked Figure?

In the film, the villain Vincent wears a mask made out of wax to hide a horrible disfigurement caused by his father when he was a child. During the climactic scenes of the film, his mask comes off and shows his full self. As this is happening, the movie cuts to a chandelier in the house of wax as its falling from the ceiling. Could this be a reference to The Phantom Of The Opera?

Supposedly both Jennifer Connolly and Kate Winslet were up for the role of Paige Edwards, the same role Hilton later gained. I'm not too sure about the truth of this statement, but what I do believe to be true is that Hilton was the first cast member of House Of Wax. In fact, the rest of the cast was actually built around her.

There Is An Alternate Opening Scene

In this alternate scene featured in the DVD extras, a young woman who is stranded on the side of the road calls for a tow. The villain comes up to the woman in a truck and starts to speed up after providing no assistance or response. She runs from the truck but the villains grabs her by the neck and throws her into the windshield where she is killed. It definitely gives less insight into the killer which the film's actual opening scene does in horrifying fashion.

A Famous Film Plays In The Town's Movie Theater

While exploring the town of Ambrose in the film, Cuthbert's character comes across a movie theater where the film Whatever Happened To Baby Jane is playing. While that film and House Of Wax are not really related, both films feature dysfunctional siblings in a dominant/submissive relationship. So the famous film's appearance in House Of Wax actually makes sense.

Apparently The Glue Scene Was Actually Kind Of Real

According to Elisha Cuthbert in the DVD extras for the film, the glue scene was actually kind of real as Brian Van Holt did put glue on her lips. However, it most definitely was not crazy glue, but more of a glue that wouldn't harm her mouth too much. Even Jared Padalecki was surprised by Cuthbert's reveal during the commentary. I think Cuthbert gets the most points for method acting.

There's A Reason The Wax Statues Looked So Real

Much like the premise of the film itself, the wax statues in the house of wax weren't made of wax. Many of them were extras in wax masks according to the DVD movie commentary with the cast.