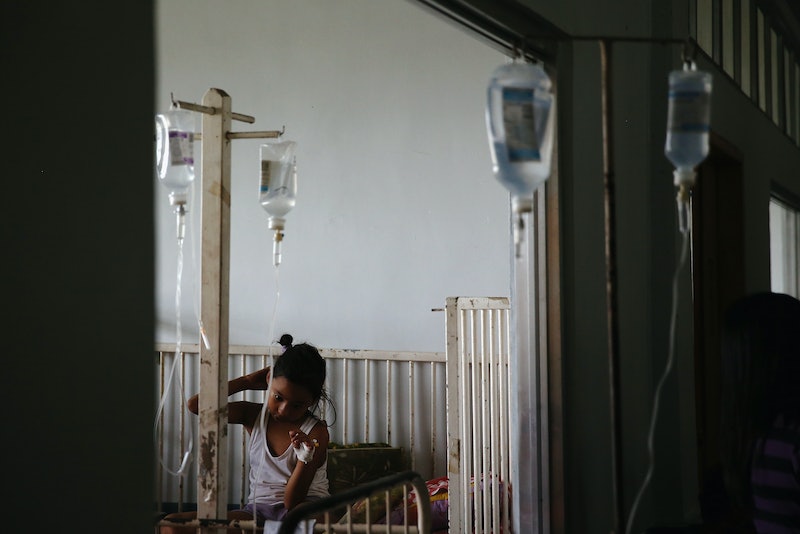 Government health officials in Paraguay have denied an abortion to a pregnant 10-year-old girl whose mother says she was raped by her stepfather, further placing the nation's draconian anti-abortion laws under international scrutiny. The request for an abortion was made by the girl's mother, whom Reuters reported has made appeals to officials in the past about alleged ongoing sexual abuse, though no action was ever taken against the stepfather. Now, reproductive health advocates say the 10-year-old girl will be forced to endure this life-threatening pregnancy unless leaders in the international community intervene.

Paraguay, like most of the heavily Catholic nations in South America, has some of the toughest abortion restrictions in the world. The procedure is banned there in all cases, including rape, incest, and when the fetus has a severe abnormality; exceptions are only made for when a girl's or woman's life is at risk. People who perform abortions, including women who self-terminate, face up to 30 months in prison.

Although the girl's family told the health ministry that the pregnancy and birth will threaten her physical and mental health, government health officials contend the 10-year-old is not only able to carry the pregnancy to term, but also doesn't have a strong enough reason to warrant an abortion. Paraguay Health Minister Antonio Barrios has been quoted in local newspapers claiming that, at roughly five months pregnant, the 10-year-old's pregnancy carries no risk factors.

"There are no indications that the girl's health is at risk," Barrios told Paraguay's ABC newspaper. "We are not, from any point of view, in favor of terminating a pregnancy."

Yet human rights groups such as Amnesty International say the girl is not only in a dire position because of her age, but also because of the alleged history of sexual abuse the girl's mother says is committed by her stepfather, who is now evading authorities (the stepfather has not issued any public statements at this time). "The physical and psychological impact of forcing this young girl to continue with an unwanted pregnancy is tantamount to torture," Guadalupe Marengo, Americas deputy director at Amnesty International, said last week in a statement.

However, an official with Paraguay's Ministry of Public Health and Wellness told The Guardian this week that even if an abortion was approved, it may not be in the girl's best interest at this time. "[G]iven the stage of the pregnancy, it’s even more dangerous for the girl to undergo a procedure [to abort] without a well-considered medical, obstetrical evaluation," health care programs director Lida Sosa told the news source.

According to Amnesty International, the 10-year-old girl didn't know she was pregnant until her mother took her to the hospital in April, complaining of abdominal pain. Doctors then discovered that the girl was about five months pregnant. The mother, who requested the termination, was placed in custody, charged with being an accomplice to sexual abuse and violating her duty of care, Amnesty officials said.

Several reproductive health organizations have joined Amnesty International in calling for a safe and legal abortion for the 10-year-old, who is now, at five months pregnant, virtually on her own. As Paraguay's laws on abortion and reproductive rights are greatly influenced by the long-held presence of the Catholic Church, progressive U.S.-based organization Catholics for Choice sent a letter to Barrios, urging the health minister to allow the girl's abortion in a way that would also respect the church's teachings on social justice and morality.

"I implore you to permit the girl and her family the right to exercise their conscience in deciding whether to have this health-saving abortion," Catholics for Choice President Jon O'Brien wrote in the letter. "In a pluralistic society such as Paraguay, many people recognize the morality of abortion and embrace public policies that uphold the human right of women to decide matters related to their reproductive health."

"I, and Catholics around the globe, call upon you to protect the health of the girls of Paraguay," O'Brien added.

Although abortion is outlawed in Paraguay, illegal abortion — whether performed by unlicensed doctors or by the women themselves — is common. According to the United Nations, roughly 26,000 illegal abortions are performed each year, and more than one-third of Paraguay women are believed to have had a clandestine abortion. U.N. researchers have said that the lack of abortion access, as well as adequate prenatal care, contributes to Paraguay's high maternal morality rate.