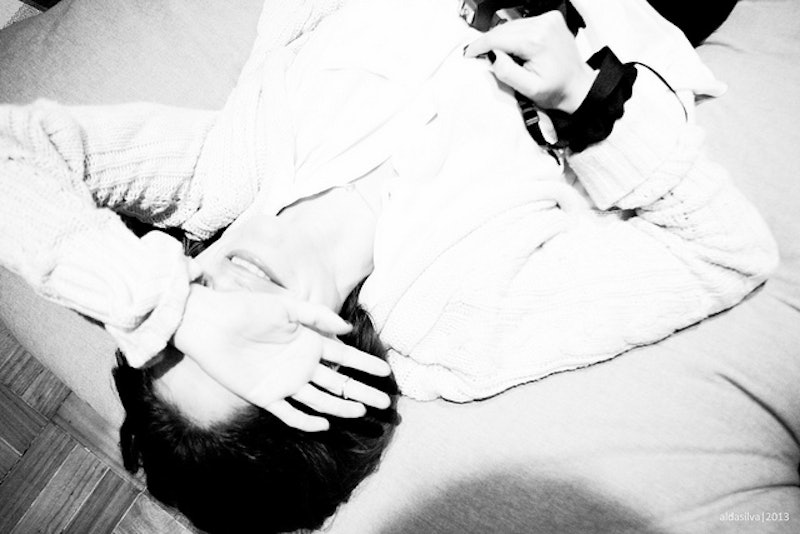 Because I'm a nightmare, I've been asking all the guys in my life — including a few second and third dates — a research question: do you think any girls you've been with have faked it? And if so — setting aside a few other preliminary questions about why women fake orgasms and how you handled it — did it change how you felt about them?

Their answers were horrifyingly uniform: though not every guy believed they'd been faked on, almost all appreciated the act of faking as a concept. You guys, the word "sweetheart" repeatedly came up. One dude even used the expression "taking one for the team." Basically, in comparison with the horrors of dead fish syndrome, men across the board (at least the weirdos that I associate with) said that they appreciated the effort of a faking girl to create a mood and pump a man up.

But let's face it, as a woman, faking is not an ideal situation. Even if you're doing it to psych yourself up a bit about sex, as some studies suggest, or to gracefully finish things, according to others, resenting your lack of a big ending is real. And the fact that you're not getting off at all can be a symptom of larger issues.

Here are just a few issues that fake O's can be symptomatic of:

Find yourself suddenly faking it with a long term partner? You might want to pay more attention to your emotional dynamics than your sexual ones. If your partner has done something to violate your trust (abuse, cheating) a phenomenon called "genital armoring" can leave you literally numbed to pleasure during intimacy with your loved (or not so loved) one.

2. You're in the honeymoon phase of your relationship

If you're still in "impress your dude" mode, you may be conducting sex like a performance — a performance that aims to prevent awkward moments like having to tell your partner that the finger banging just isn't doing it for you, or that you need his mouth up and a little to the left.

3. Sex is going on too long and/or not including enough of what you like

80 percent of women use a fake orgasm (or similarly encouraging moans, groans, grunts, scratching motions, etc) as a way to speed along intercourse when they know they're not going to come and they're kind of over it. Not mentioned in the study but obviously true: literally telling a guy to wrap it up is nowhere near as effective at getting him to finish and/or boost his self esteem.

4. You're cheating or thinking about it

O-faking is a sign that you've got one foot out the door: ladies who pretend to have orgasms are more likely to have cheated on boyfriends in the past, and are more likely to cheat again in the future. (Sorry, men, I realize this is a lot of bad new in one place). The good news is, the same study linked real orgasm with deeper connections and faithfulness so, maybe try to turn things around?

They should change "whiskey dick" to "alcohol genitals" because even with vodka and a vagina, you can have trouble getting there too. #struggles. The good news is, simply cutting down on the alcohol, pre-encounter, has shown to have immediate benefits for arousal and orgasm rate. (That said, if you feel like you need to be drunk to have sex, find out what's up with that).

6. You're trying to train a guy

Sometimes getting a guy to do the right stuff is a long and exhausting process. It can take several sessions to get a guy to do the effective things— and even though he's finally stopped putting his tongue in your vagina, he might still not be quite hitting the spot (or is, but it took him three hours to find it and now you're exhausted — see item three). But keep fighting the good fight!

7. You're having contraception woes

Hormone changes can wreak havoc on all parts of your body, including, it turns out, your junk. Alternatively, if you're not on the pill, worrying about potential pregnancy can mess with your lady boner too.

8. You're afraid of being judged for what you want

This study which spoke to real women (instead of doing something weird like hooking them up to blood-flow testing machines and making them watch videos of monkey sex) reveals that women often fake it because they're afraid of being judged for what they really want. As one woman (relatably) said, “I don’t want him to know that I’m one of those women who can’t get aroused from a penis inside her.”

9. You're focusing a lot on whether or not you're feeling appropriate desire during sex

Today in Maddening News: thinking about whether or not you're going to come could quite possibly ruin your shot at coming. The good news is that fantasizing or focusing on good sensations (and not worry about whether or not they'r going to get you to orgasm) have been shown to help things along.

A study meant to investigate the effects of cigarettes on male sexual performance also found that nicotine intake attenuates sexual function in women. Just another reason to quit!

11. You may be anxious or depressed

It follows that a general inability to enjoy life would include sex and orgasms, and you probably already know that antidepressant drugs can make matters worse. But even in the actual moment, having a lot on your mind can directly hinder the sexy thoughts you need to get off.

The good news? Exercise has been shown to help.

12. You partner is overly attentive to the fact that you don't usually come

Self fulfilling, meet prophesy: your partner's (or your own) negative thoughts about intercourse (whether it's because it's orgasmless or it's actually painful) might be making your O too highly pressured to be possible. And if your BF is one of those who simply won't give up until it happens, well, see item three again.

A 2011 study found that "women who perceived higher risk of partner infidelity were more likely to report pretending orgasm." Author's opinion: maybe the relationship isn't worth hanging onto though?

14. You have a small clitoris, and/or one located further away from your vagina

If you're a regular faker during intercourse despite being able to get off on your own, anatomy may be effing with your sexual ish. A smaller clit (re: harder for you partner to find) or one located further from your vagina (re: less likely to get stimulated by accident during intercourse) might be thwarting your best coital efforts, leaving you with no choice but to give Oscar-worthy performances.

15. Your partner is not the right fit

A study has linked bigger penises to "vaginal" orgasms (which, let's just interpret as orgasms that happened during sex because "vaginal orgasms" probably aren't thing). That said, researchers believe that the bigger story is what each particular woman who participated in the study preferred (ie. the woman who preferred larger penises got off on them, but women who came through oral or foreplay didn't mind either way).

That means the real takeaway (which kind of goes for all of this) is to be honest, both with yourself and with your partner, about what truly gets you off.

Let's hear it for real orgasms!