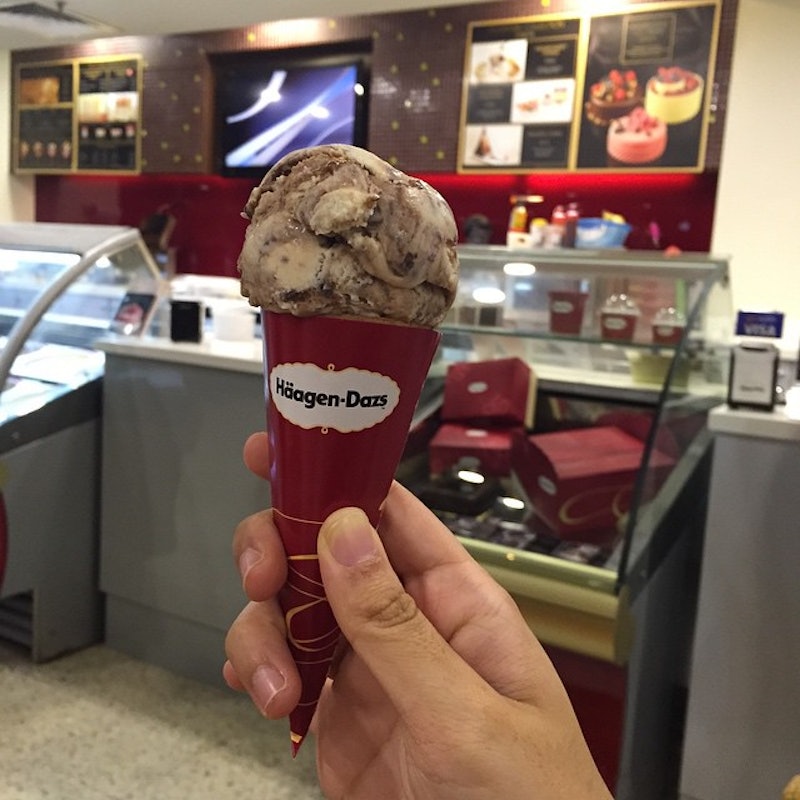 Autumn used to be my favorite time of the year, but pretty leaves don't have anything on multiple days of free sugar. With the recent onslaught of ice cream giveaways, spring officially has my vote for the title of Best Season Ever. And it's not over yet! On May 12th, Haagen-Dazs Free Cone Day will give rise to a fantastic celebration. With "artisan flavors." Oh my goodness.

From 4 to 8PM at participating Haagen-Dazs locations, you can walk away with a free cone of ice cream, sorbet, or gelato. The event will be spotlighting two new flavors from the chain's Artisan Collection: Banana Rum Jam and Chocolate Caramelized Oat Ice Cream. I cannot conceive of what either of those would taste like, but they sound so fancy. Fancy enough that I feel like I should eat them while wearing a tiara or something.

The new flavors are the results of Haagen-Dazs' recent collaboration with local food artisans from across the U.S. Jessica Quon and Sabrina Valle of Brooklyn's The Jam Stand are the brains behind the boozy Banana Rum Jam, while Claire Keane of San Francisco's Clairesquares is responsible for the Heath-Bar-esque Chocolate Caramelized Oat Ice Cream.

Sound awesome? It is! But there's more! On May 12th, Haagen-Dazs will also be hosting an Ice Cream Social on Twitter. Share your decadent moments using the hashtag #HDfreeconeday, and you'll be eligible to win a number of prizes, including a gift card redeemable for a year's worth of Haagen-Dazs ice cream. You heard me. An entire year... of fancy, artisan flavors. You will be so incredibly cultured by this time next year.