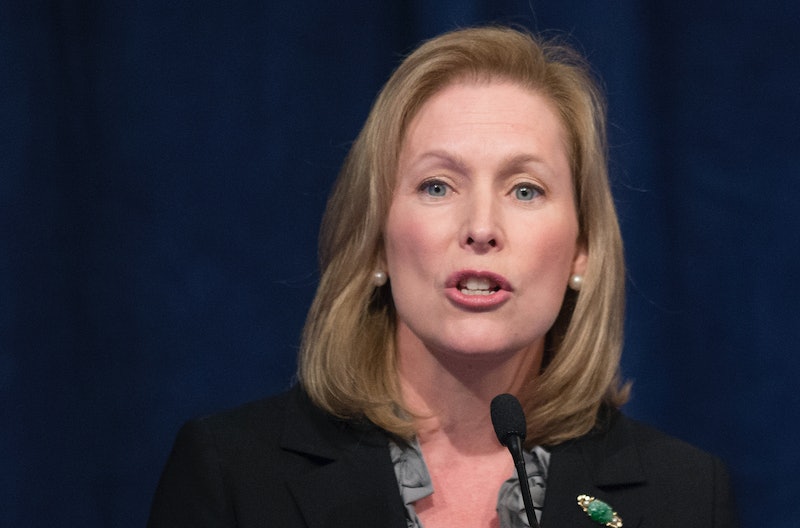 The year is 2015, and the discussion surrounding sexual assault has reached an apex, becoming more urgent and more relevant today than ever. The focus is particularly heightened on college campuses, where, according to a 2012 Center for Disease Control survey, 19 percent of undergraduate females experienced attempted or completed sexual assault and 37.4 percent of female victims were first raped between the college-ages of 18 to 24. One piece of writing on campus sexual assault making waves is Jon Krakauer's Missoula, which Sen. Kirsten Gillibrand, one of the leading national figures in Capitol Hill tackling institutional sexual assault, recommended to Bustle at the Matrix Awards in Manhattan on April 27.

Missoula: Rape and the Justice System in a College Town documents cases of reported and attempted rape in the University of Montana from 2010 to 2012 through the eyes of five women. The book also details responses from local law enforcement and the prosecutor's office to each of the incidents, which, as Krakauer explained, were sorely underwhelming as the Justice Department discovered an alleged pattern of contempt and negligence toward the alleged victims.

The book is in stark contrast to another piece of reporting on campus sexual assault: the fiasco that was Rolling Stone's UVA story. Published in November amid a growing intensity in the debate about how colleges handle such cases, "A Rape On Campus" told of the brutal gang rape of a University of Virginia student, Jackie, and the subsequent resistance she faced while trying to report the incident. The article spurred outraged responses at the college's mishandling of the case, but doubts later surfaced about some details in the story that raised questions about the credibility of Jackie's allegations.

Earlier this year, Charlottesville police concluded in an investigation that they were unable to confirm the incident actually took place, leading Gillibrand to speak up in warning against victim blaming. As the story continued to unravel, Rolling Stone retracted the article in April after an independent review found that a whole host of journalistic errors were made in its reporting. Advocates and rape survivors saw it as a setback to the progress made in conversations about sexual assault cases.

Distinctively, Gillibrand struck an optimistic tone in response to the journalistic disaster, telling Bustle that the controversy had, in fact, added to the level of discussion: "I think it has raised the level of debate. I'm hopeful that it actually increased the spotlight on the real risk and challenges of this problem and how we have to change how we deal with these campus assaults — and how we deal with sexual assault in general, both from campus adjudication process as well as a law enforcement process."

Missoula, then, could be a testament to the increasingly elevated standard to which we hold colleges accountable and underscore how challenging the conversation is in the attempt at justice. Krakauer, a self-identified feminist, began looking into the sexual assault cases on campus after discovering that someone he knew personally was raped, two separate times by two different men.

The book delves into how and why those incidents unfolded as they did, providing a backdrop for how many campus sexual assault cases are dealt with across the country. The 61-year-old author depicts in Missoula the burden on colleges and their officials to strike a fragile balance of respecting equally the rights of the accuser and accused in such cases that could result in life-altering consequences.

As with any reporting on sensitive and deeply personal topics, there are varied, and valid, criticisms of the book. The New York Times review of Missoula took issue with the writing's lack of focus on other facets of the women at the center of the story, save for their involvement in the cases, reducing them, "however inadvertently, to victimhood." Similarly, Alyssa Rosenberg pointed to Krakauer's failure to delve into the town of Missoula and the community itself, giving the book a one-sidedness that some did not expect of the best-selling author.

But there are larger questions about Missoula. Krakauer admitted that before writing the book, he knew little about rape and "had never taken it seriously," even previously brushing off an ex-girlfriend's rape, which Jessica Valenti at The Guardian pointed to as an example in her piece asking why a man writing about sexual assault is able to foster such intense public debate about the issue when many women have been saying the exact same thing — namely, that rape "occurs with appalling frequency" — for years, if not decades, to less reception. Valenti pointedly wrote: "This leaves me wondering if we’re really only willing to trust that women are raped when it’s a man telling us."

Despite its criticisms, the book is in line with Gillibrand's own efforts to combat sexual assault, raising awareness at perhaps the most opportune of moments. As sexual assault on college campus — a place that should be a bastion of learning and exploration — and how administrations handle them takes the national stage, Gillibrand has spearheaded the movement to hold perpetrators and those involved in the investigations to lawful accountability, and made efforts to highlight the issue at every chance she gets. At this year's State of the Union address, Gillibrand's guest was Emma Sulkowicz, the Columbia University student who made headlines last year for carrying a mattress to protest sexual assault that she alleges to have experienced on campus and as a performance piece for her senior thesis.

A rare type of politician in Washington these days, Gillibrand is known for her enthusiasm for and confidence in bipartisanship — a quality that, in the eyes of advocates and survivors of sexual assault, could prove a sincerity in tackling the issue that others embroiled in petty partisanship lack.

One piece of legislation co-sponsored and most fiercely being pushed by the New York lawmaker is the Campus Accountability and Safety Act (CASA) which would significantly increase requirements for colleges to respond appropriately to sexual assault cases and allow the government to lay down heavier fines for those that mishandle such investigations.

But the struggle remains at the point where colleges have to be pressured to take such reports seriously. Citing bad press and poor training at a "Women in the World" conference in April alongside Krakauer and Annie E. Clark, the co-founder of End Rape On Campus, Gillibrand claimed that campuses were "doing a horrible job" in handling sexual assault cases. In April, the Department of Education was reportedly investigating a staggering 106 colleges for botching inquiries into sexual assault claims.

Missoula is just one puzzle piece in the effort to educate and to put together a comprehensive strategy for campuses to handle sexual assault cases — with sensitivity, respect, and urgency for both sides. Gillibrand aptly told of what Missoula — both the town and the book — represents:

I think it's part of a much broader conversation about the challenges we really face and how difficult these cases are.