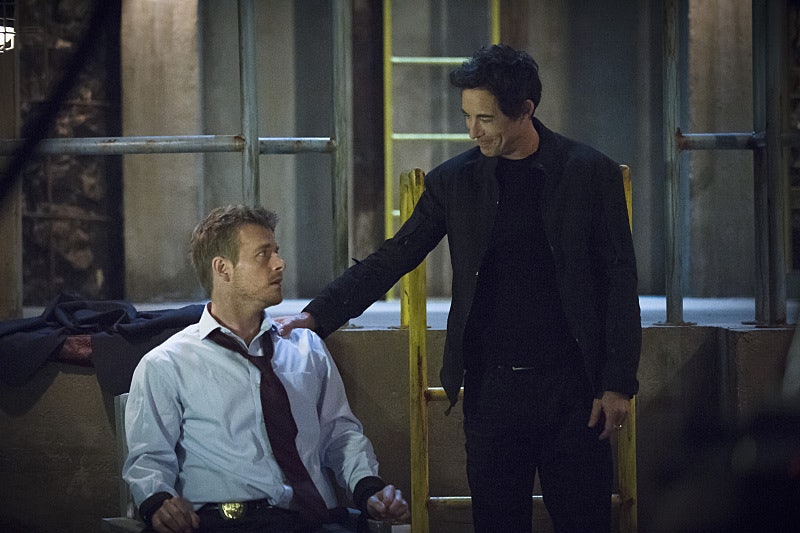 What's going to happen to Eddie on The Flash?At the end of last Tuesday's episode, Harrison Wells kidnapped Eddie Thawne and called him his "insurance plan" — which makes sense considering that they are related. Is Harrison Wells going to turn Eddie Thawne evil? Even villains need sidekicks, or at least lackeys. Could this be the dawn of the Flash villain Cobalt Blue?

There's no way that Eddie is in any actual harm or danger. Surely Thawne can't kill his own ancestor, right? I've seen Back To The Future. I know how this works. Now that everyone on the team knows that the two of them have a family connection as well, I doubt that they fear for Eddie's life either — except for the promise that Barry made to Iris that he would save him.

I don't think the time-space continuum would allow Wells to spill the beans about Iris' future marriage to Barry. However, blood is thicker than future ink and Eddie might have more resentments build up regarding Barry and Joe than he realizes.

By the way, I tip my hat to The Flash for putting male characters like Eddie, Cisco and Joe West in danger and in need of rescue as often if not more often than Iris and/or Caitlin. There's a great balance between the sexes and I appreciate it.

In this still image from Tuesday's episode, Wells is holding something scientific that looks like it could be injected into someone if they happened to be tied up. To me, that is the biggest clue. Is Eobard Thawne going to turn Eddie into a metahuman?

Specifically, is he giving Eddie the speedster powers that Eobard will ultimately receive? We know that Eobard is a metahuman with powers similar to Barry's and that he has been working on replicating those powers in S.T.A.R. Labs. Unless there was more than one particle accelerator explosion in Central City, we don't know how Eobard Thawne got those powers in the first place. What if whatever makes you a metahuman interferes with your genetic coding, and you pass it on to your offspring?

Not only would that explain a major mystery, but it would also mean that Eddie would become a metahuman as well. Will he go the way of Barry Allan, or join the Rogues? As I mentioned before, in the comics there is a Malcolm Thawne, who becomes the villain Cobalt Blue. Eddie is a police officer, and they wear blue. Malcolm can produce a blue flame, much like the substance in that vial. Perhaps this is Iris' boyfriend's destiny.

Either way, I'm excited to see Eddie step into the spotlight on The Flash. We've known that his name was meant for big things from the start of the series, and now it's all coming together!