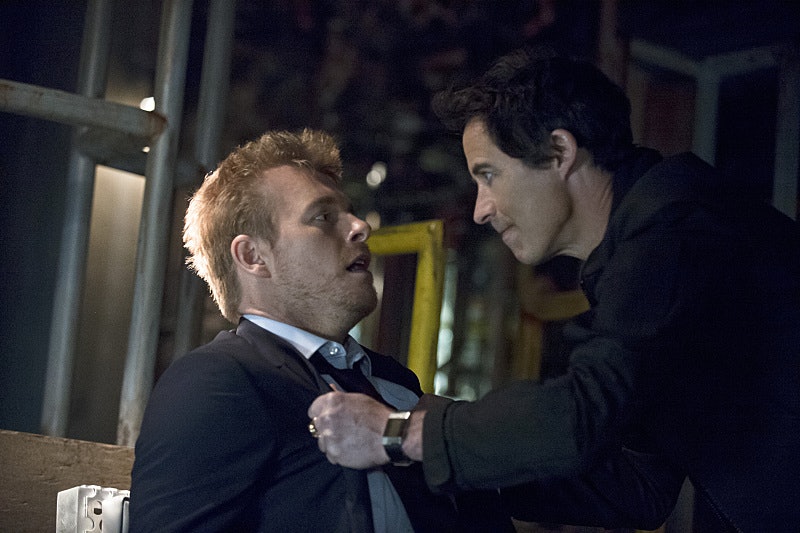 The Flash is hurtling towards its first season finale, and it's about time for all those chickens to come home to roost. The showdown between Eboard Thawne and Team Flash kicked off in earnest in "The Trap," when the good guys made the inconvenient discovery that they might be outmatched. The man we knew as Harrison Wells wields the metahumans in his facility like weapons; he thwarted Team Flash's trap by sending Hannibal Bates in the guise of himself. Handy to have a shapeshifter around, no? But most importantly, Eobard also kidnapped Eddie Thawne, his "distant relative," and I'm very worried about Iris' boyfriend.

It's surprising that the good guys didn't see that move coming, what with Thawne's reluctance to show himself except when it benefits him. They know who — and to some degree — what he is, but that knowledge isn't really an asset. The enduring mystery of Thawne is apparent in his choice of who to declare himself to and why. And one of those lucky contestants is good cop and man Eddie Thawne. He may have been all tangled up in the Revers- Flash's plans for years — without even being aware of it. Eddie has seemed like the outsider for much of the season, but in reality, he's closer to Eobard than anyone else in Central City. This has to be significant. Eobard sure thinks it is. But why? What's Eobard's endgame plan for Eddie?

The Flash and Arrow are their own shows, and one's tone is certainly darker than the other. But I'm still tempted to assign some of Arrow's rules to The Flash, since they do exist in the same universe and I can't fully separate them in my mind. So far, each Arrow season has punched fans right in the face with a major character death. I won't list them here; I got you, Arrow newbies. But I will say that each sent emotional shockwaves through the show. Maybe The Flash won't go that far before Season 1 is out, but I'm preparing myself for the worst. And in that instance, the main character who I could most easily picture getting the ax is Eddie.

Consider it: Barry and Iris will become an item eventually; it's really just a question of when. Narratively, Eddie stands in the way of that. And it's always harder to pry your heroine away from the other guy when he's also nice and brave and truly loves her. In the same vein, Eddie's death would obviously destroy Iris (and Joe). That grief would provide at least another half of season's worth of convincingly keeping WestAllen apart. I don't mean to sound so callous about Eddie; I like the guy. But story is ruthless. Otherwise, there would be no stakes.

I don't expect a traditional death for Eddie. Maybe their link means that the Reverse-Flash can't kill him outright without severing his own timeline. But Eobard doesn't seem especially attached to his current body. When he described Eddie as his "insurance" in "The Trap," I instantly thought of Eddie as another vessel — Plan B, in case Harrison Wells goes down. Whatever his exact fate, I'm still convinced that Eddie Thawne is about to undergo some major changes that might affect his friends for years to come.