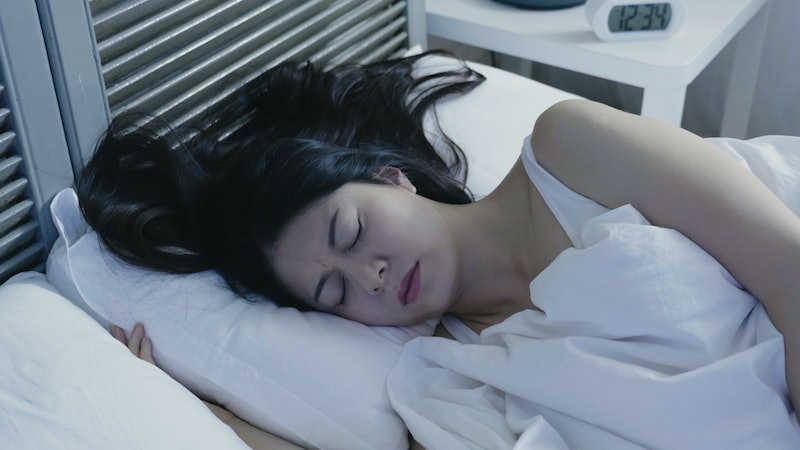 Most of us grapple with nightmares as kids — but becoming an adult doesn't automatically mean we stop having bad dreams. In fact, some researchers estimate that three-quarters of all of our dreams are nightmares, even if we don't live anywhere near Elm Street — we just usually don't remember most of them after we wake up. And if you're one of the 8-29% of adults who have at least more than one nightmare a month, the human tendency to have bad dreams is more than just a quirky fact; it's a real and practical problem that can leave you sleepless, irritable, unproductive, and worst of all, terrified of naps.

Why do our brains do this to us, when we have done nothing but be kind to them?! (OK, fine, watching Vanderpump Rules for six hours last weekend wasn't that kind). According to psychotherapist Annie Armstrong, nightmares don't exist just to torment us; they usually serve a greater purpose in our subconscious. "They can be about some larger part of our lives, or part of our personality that might need some attention," Armstrong tells Bustle — so if you're someone who works hard to repress you own anger during your waking hours, you might "have violent nightmares that shock [you]," because repressing all those feelings has become difficult for your subconscious.

Nightmares can also be tied to a larger fear in your life, or a pattern of behavior you need to let go. Armstrong notes that she worked with a client who "dreamed she let her baby sit alone in a room, crying and starving indefinitely, while she nervously went to lunch with friends and answered work emails, all the while knowing she should be taking care of her baby." For her client, these weren't stress nightmares — she had little stress in her waking life — but through examination, she eventually realized that the baby symbolized her own well-being, which she ignored in favor of pleasing the people around her.

1. Reconnect to the Real World

If you wake up from a nightmare with a thudding heart and a conviction that whatever just happened — the car crash, the tornado, the demonically possessed Furby — in your dream was ACTUALLY real, spend a moment anchoring yourself in waking reality. "Orient yourself to the space," advises Armstrong, taking special care to "look around, take in your bedroom, touch the blankets and the pillows, and importantly, remind yourself you are safe." If a partner, roommate, or other loved one is around and awake, they can also be a good source of reassurance that no, there is no evil mannequin with a chainsaw hiding in the closet (I mean, none that you know of, anyway).

Once you've re-established yourself in the waking world, it's a good time to begin writing about your dream. You don't need to write an in-depth analysis of it — just write down what happened, record yourself describing your dream, or draw it if you're more visually oriented. Drawing it can have an added bonus, says Armstrong — it "can be helpful in externalizing and neutralizing the nightmare, which is an overwhelming internal process." She likens it to seeing a scary movie villain out of costume.

Then, think on it. "Spend time being curious about it that morning or throughout the day," says Armstrong. "Think of the dream objectively and symbolically, as if it were something to decode or a poem to interpret, rather than holding onto the images so literally."

Journaling or drawing about your nightmare might do more than just help you feel calmer in the moment — Armstrong notes that "consistently examining your nightmares can help decrease their frequency," because this process can put us in touch with feelings or experiences that we are consciously repressing, but which are coming out in our nightmares. "Spending time being open and curious can help lessen the intensity," says Armstong.

3. Talk About Your Nightmares With Someone You Trust

Understanding your nightmares doesn't have to be a solo endeavor. In fact, discussing them with a friend, therapist, or similarly supportive group might give you insights you wouldn't have on your own. Discussing your disturbing dreams with others can also "give you some objectivity around something that might feel really overwhelming on your own," says Armstrong. "The things that we are ashamed or afraid of often times feel less so when we say them out loud to someone we trust."

4. Once You've Found The Source Of Your Nightmares, Work On It

If you've spent some time analyzing your nightmares, alone or with others, you've probably come to some conclusions about what is triggering them — unresolved issues with your mom, a punishing work schedule that has made you feel like you've lost yourself, a tragedy you never fully allowed yourself to mourn. The next step is to figure out what to do with the issue that your nightmare has uncovered.

Armstrong gives the example of someone who is having recurring dreams about plane crashes because they feel overwhelmed and out of control; "maybe the next step would be to think about ways you can tend to your sense of agency in the world. Maybe it is in small ways: making those doctor appointments, taking that martial arts class you have been meaning to, asking for that raise, or giving your self space to just be rather than running yourself ragged."

5. Ask Your Nightmares To Stop

You might feel silly doing this one. But if you've been having a stressful amount of nightmares, Armstrong suggests that you give this a try: ask "yourself, your brain, your unconscious, whatever you are comfortable calling it, for more peaceful, gentle images. That way, you can you understand what it is you are trying to work out in your sleep without getting so scared."

Not all nightmares can be resolved with just some pluck and a new journal. Nightmares are a very common part of Post-Traumatic Stress Disorder — according to the National Center for PTSD, 52 to 96% of people with PTSD report frequent nightmares. If you've had a traumatic experience involving abuse, sexual assault, physical violence, or anything else, and have frequent nightmares about the event, it could be a sign of PTSD, and you should seek professional help.

The same holds true if "you are overwhelmed and flooded by your nightmares in a way that is negatively impacting your sleep or sense of well being," says Armstrong. "Those are clues that it is time to seek help in processing your experience so that you can find some peace and rest, and properly tend to what might be trauma or other mental health related issues. "

7. Talk To Your Doctor About Your Meds

There's one final step to consider, one that has nothing to do with your inner consciousness — your nightmares could be triggered not by an issue in your life, but by a specific medication. Some patients who have recently begun taking certain antidepressants report nightmares and especially vivid dreams; other medicines associated with nightmares include beta blockers and some sedatives and sleep aids. Some people have also anecdotally reported that B6 and B12 supplements have led them to have extremely vivid dreams and nightmares.

Of course, sometimes a medication's importance in your life is non-negotiable, and it is worth just sucking it up and coping with the side effects. But if consistent nightmares are starting to take their toll on you, tell your doctor and talk about possibly switching to a different but similar medication.

And more than anything, know that you're not alone, and not hopeless (even though, after your third or fourth "chased through my childhood home by my 1st grade teacher" nightmare, it sure can feel that way). "I think something to hold onto when you are dealing with [nightmares]" says Armstrong, "is to know they can also be a powerful tool for deeper self understanding. As painful as they are, they can lead to healing and creating more balance in your life. If you think of nightmares as amoral and try to not take them literally, with some curiosity and understanding, they might just lead you to a more balanced, peaceful phase of life."

This article was originally published on May 6, 2015