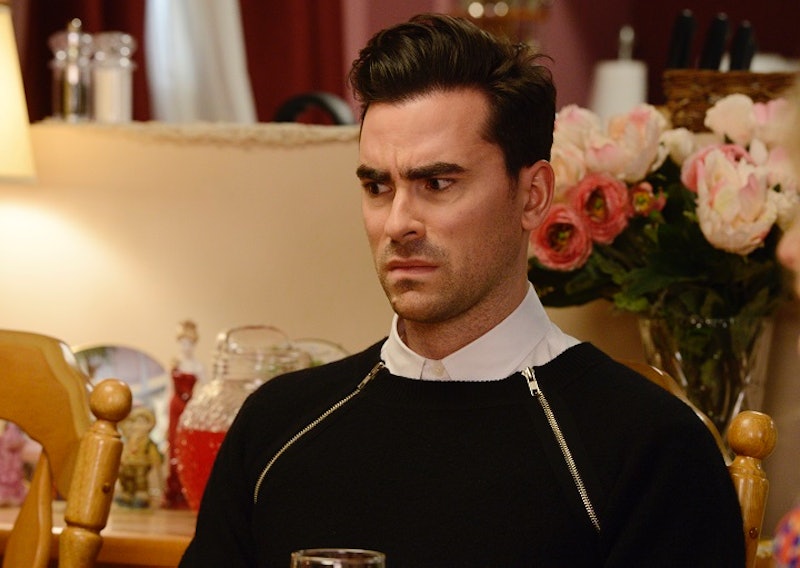 Daniel Levy is the co-creator and one of the stars of Schitt's Creek , a surprisingly great Canadian sitcom about a wealthy family who finds themselves not so wealthy (think Arrested Development). He's also related to another comedian (and co-star/producer of the show): Dan Levy is Eugene Levy's son. And he's a total babe. I don't mean to objectify him, either — the guy's seriously talented. Instead of becoming a Chet Haze, he was able to turn his experience in Hollywood — which came because he was a successful TV host on MTV Canada, by the way, not because of his dad — into an idea for a goofy comedy about the troubles that would face a rich family if they lost everything and were forced to move up Schitt's Creek, literally. Because that's their one remaining asset: a country vacation home. Now, instead of living the pampered rich a-hole life they once knew, the Rose family is forced to get accustomed to living as regular members of their new town... which is, of course, populated with denizens as strange and bizarre as they are. (Look no further than Chris Elliot as the mayor.) But as the finale airs, we'll have to deal with lots of time outside of Schitt's Creek.

It'll be difficult, because Schitt's is a really excellent show, especially since it's from a creator who has never written a TV comedy before. It's not going to help that Levy's got the three things that win me over immediately: a sharp wit, serious drive, and really great hair. But now that Schitt's Creek is ending Season 1 and my crush on young Levy has only just begun, what can I possibly do in the offseason? Well, here's my survival guide. Hopefully it can help you get through this difficult time, too.

It's similar enough in tone that you'll be laughing just like you were watching Schitt's Creek. You can tape a picture of Dan to your computer if you're now totally unaccustomed to laughing at TV programs without good looking Canadians in them. Oh, and even though it's painful, make sure to watch AD Season 4 too, because it will remind you that too much of a good thing can be a bad thing. Because SC is perfect as a 13-episode season. No need for 22, or for 38-minute episodes.

2. Grow Out Your Eyebrows

The whole Levy family is known for their distinctive brows, so why not jump on the trend while you can? Give up plucking, waxing, and fill those babies in. Side effects include realizing you don't look like Cara Delevingne and greatly improved comedic reaction shots.

3. Catch Up On Christopher Guest Movies

If you're not already familiar with A Mighty Wind, Waiting for Guffman, and Best In Show, you're probably missing out on just how great Eugene Levy, Dan's dad, is at co-creating comedic genius.

Just for a lil Catherine O'Hara goodness. Because she's the only person who I have more of a crush on in this cast than Dan. And it works as a Schitt's prequel, if you imagine that Delia left the Deetz house and immediately remarried Levy's character, changed her name to Moira, and became a Rose.

5. Buy Some of His Glasses

DL Eyewear is another one of Levy's projects, and the glasses are pretty great in a Warby Parker-esque kinda way. And if you're a dude, it's a great way to get that Dan Levy look. Hey, if you're a lady, feel free to also get his look. The Dan Levy Look (TM) is totally unisex!

Unless you hate dog selfies, weird videos, and Schitt's Creek updates, that is. Oh, your Dan Levy crush is somehow even stronger now? Sorry! (Not sorry.)

More like this
Dan Levy’s Father’s Day Pic Of Dad Eugene Spoofs The ‘Schitt’s Creek’ Vet’s Past
By Grace Wehniainen
The Magic Is Over For Charmed
By Kadin Burnett
A New Season Of The Midwich Cuckoos Could Be Coming “To A Town Near You”
By El Hunt
The ‘Love, Victor’ Showrunner Gave Fans Hope For A Possible Spinoff
By Brad Witter
Get Even More From Bustle — Sign Up For The Newsletter