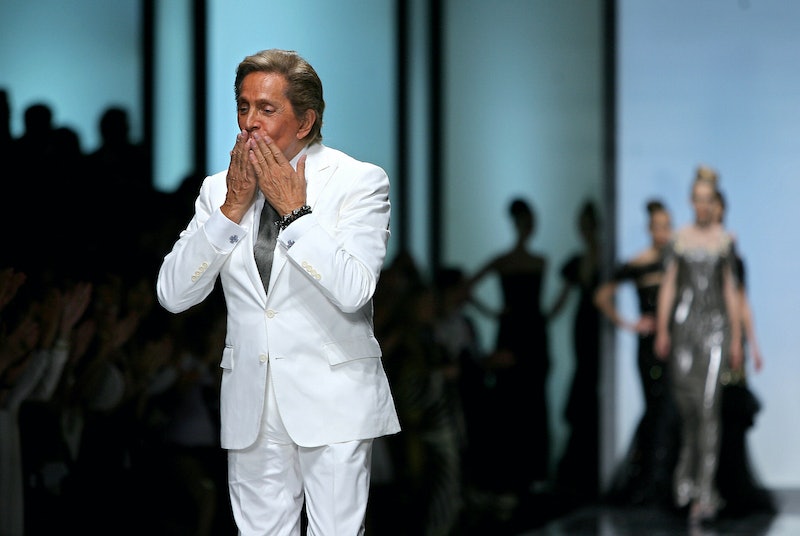 Valentino is perhaps one of the most iconic designers alive today, and whenever the innovative creator speaks, he always reveals more reasons to love him. This time, the legend spoke to Fern Mallis, former CFDA executive director, and revealed something particularly interesting: Valentino hates '80s fashion, including his own. I guess that means we won't be seeing any perms or acid wash on the Valentino runways.

Valentino opened up the latest Fashion Icons installation at 92Y in New York with a joke about revealing everything in the discussion, including what underwear he was wearing. The joke is no surprise from the charming designer, who let Derek Zoolander crash his Paris Fashion Week show. While he didn't quite go that far in describing his undergarments, the designer did explain that he's got a least favorite fashion decade, and he even discounts his own designers during that time!

"I hated the '80s fashion," Valentino explained. "Looking back at my collections I hated my dresses, they were out of proportion—the shoulders too big, the hair was terrible, the shoes were no good. I never liked it. I always loved the '40s, '50s and '60s," he continued. Though it's doubtful that he ever created anything less than stellar, we all have those past fashion decisions that we wish we could overlook.

Valentino's choice of the '60s as one of his favorite decades is notable because of his relationship with one of the decade's most famous style icons: Elizabeth Taylor. Of his first meeting with Taylor, Valentino told Mallis:

"Elizabeth Taylor was in Rome for one year to shoot Cleopatra. While there she heard I was a new designer and asked to see my clothes so we went to villa with my designs and there she was—she was still Mrs. Fisher at the time—she said she needed an evening gown for a movie opening. She was very demanding...she only would take a picture with me if I promised to give her a gown. I said, 'Choose one that you like,' and of course she chose the most expensive one."

Valentino draws a distinction between the way women dressed in his favorite decades and fashion now. "They are very beautiful but I am not so enchanted by people dressed in all black—which I've seen in the street," he said. His aversion to black definitely makes sense considering his notable love of red. Speaking of his signature color, Valentino said, "I went to Barcelona dressed to see a designer and they invited me for the opening of the Opera House...and I was really attracted by the red color so I said one day when I am going to be a designer I will put red as my lucky color—and I did."

Red may very well have been a lucky color for the designer, but there's absolutely no doubt that his talent is what has made him the icon he is today. "What I did, what my colleagues did—it doesn't exist anymore," he said when speaking at the installation, and his assertion may very well be accurate. One thing is definite though, no one else will ever be Valentino.