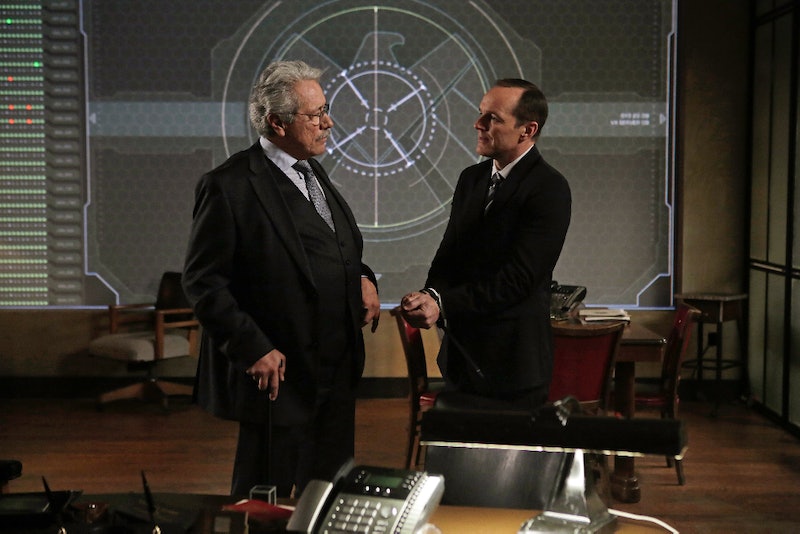 What a surprisingly simple answer to a big question on Agents of S.H.I.E.L.D. As it turns out, "Theta Protocol" was just the hellicarrier from Avengers: Age of Ultron that we learned Coulson and Fury recovered when S.H.I.E.L.D. fell and were secretly holding and refurbishing. It's the one that arrived in Sokovia in Avengers: Age of Ultron to aid the Avengers and rescue civilians. So, if you were wondering how Maria Hill and Nick Fury were able to get that together so quickly, now you know.

It's actually a nice twist. The hellicarrier being part of Coulson's plan means that both Nick Fury's line about doing "something dramatic, I hope" and Steve Rogers' line "that's what S.H.I.E.L.D. is supposed to be" were referring to Theta Protocol and Coulson's behind the scenes efforts to continue helping the Avengers.

However, the hellicarrier itself was the least important part of this reveal. Coulson, Fury, and the brothers Koenig also discovered "classified cargo" on board. The cargo was a type of alien substance. It looked like a monolith, and liquified in its container. It was defined by Raina and Gordon as "a rock with holes in it" that came from the Kree and was to be feared.

Is this the substance that makes diviners? Is this pure terrigen? If they had this all along, why was S.H.I.E.L.D. so interested in the diviner in the first place? Clearly they understand part of it, because it seems pretty well-contained.

Gonzales made the good point that the Avengers trusting the charming Tony Stark with things he could not understand is how Ultron was developed in the first place. However, I would posit that really only Bruce Banner put his trust in Stark — and can you blame him? He doesn't have that many friends.

I'm glad we can put Theta Protocol to rest, even though my fingers were still crossed for it being something like the S.H.I.E.L.D. version of Hogwarts. It gives fans the satisfaction of knowing that our favorite TV characters are behind the scenes in the movies, without interfering too much in their own plot. Still, I'll never stop hoping that Coulson will eventually return to the big screen where Marvel fans first fell in love with him.

More like this
Here's How To Stream 'Downton Abbey: A New Era' & The New 'Downton' Channel
By Alice Broster and Sam Ramsden
Everything You Need To Know About The 'Knives Out' Sequel
By Grace Wehniainen
The 'Hocus Pocus' Sequel Finally Has A Release Date & It Makes Total Sense
By Shannon Barbour and Radhika Menon
Everything To Know About 'The Hunger Games' Prequel Movie
By Grace Wehniainen and Radhika Menon
Get Even More From Bustle — Sign Up For The Newsletter