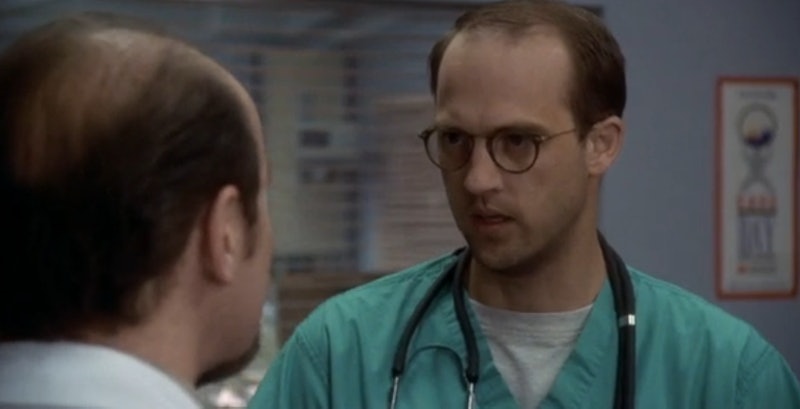 Growing up, the very first episode of ER was my favorite. I'm not sure why, other than maybe I was a very weird kid — maybe it was because it was one of the few pilots available on VHS in 1995 or maybe it was my crush on Noah Wyle, who played Dr. John Carter. In any case, it's one pilot I've seen about a hundred times in my youth, but not recently — so I've decided to change that by re-watching the ER pilot, which premiered in 1994. Yup, that would be the two-hour episode that kicks off the 15-season run of a ratings juggernaut that would launch the careers of Wyle, Anthony Edwards (who played chief resident and moral center Dr. Mark Greene), Julianna Margulies (who played Nurse Carol Hathaway before becoming The Good Wife), and, oh, some actor named George Clooney (who played the rebellious playboy Dr. Doug Ross before becoming one of the biggest superstars in the world).

The ER pilot was originally a feature film script written by author Michael Crichton, based on his days as a physician in a hospital emergency room. According to NBC executives, it was gritty, it was bloody, and it was a show they weren't sure that viewers would be into. "We waited about an hour after the screening for them to come and give us notes," longtime exec producer and showrunner John Wells told Entertainment Weekly. "Don [Ohlmeyer NBC West Coast president] was very unhappy that we didn’t address his notes — about the language, things moving too quickly, how there were too many characters — all the things that ended up becoming the hallmarks of the series."

Here are TK things you may have missed about the ER pilot, which takes place over a period of 24 hours on St. Patrick's Day, thus being titled "24 Hours."

The pilot episode opens with a nurse waking up a sleeping chief resident Dr. Greene at 5 a.m. He pleas with her to have an intern take the patient instead, but she insists that he has to see this special patient — it's a drunk-off-his-ass Doug Ross, the sexy pediatrician with a rebellious streak and a heart of gold. It's our first preview of the charm of Clooney manifesting.

But this isn't the moment he becomes a star. Oh no. I will always believe his star-making moment is the scene where he lifts a little boy out of a flood in the Season 2 episode "Hell and High Water." Clooney went from being a simple TV heartthrob to a superstar in one episode. And he hasn't stopped charming us since.

It's something I always noticed upon my viewings of the ER pilot: Benton smiles. Benton — and portrayer Eriq La Salle — makes his first appearance in the entire series with a huge smile. It's one of the last times we see that smile, though, because throughout the rest of his tenure on the show is being, well — to put it bluntly — a super-serious arrogant hard-ass, especially with his med student John Carter.

But in the pilot, Benton has a cheery arrogance. He's called a "smart-ass" by a senior doctor and his talents (as well as bravado) are doubted by many others. It's almost as if they're about to call him "007" a la George O'Malley like on Grey's , but Benton proves to be far more capable in his early residency, ending the pilot by successfully performing his own solo surgery.

And that famous triumphant punch La Salle does in the credits? That scene comes from the pilot. right after the solo surgery.

All The Residents Used To Hang Out Together

One thing I always loved about the pilot is that Greene, Lewis, Ross, and Benton used to talk and hang out with each other in the lounge, kind of like they were — get this — actual friends. As the series goes on, their bond isn't as strong and they don't hang out together as much. The characters go their separate ways — Benton mostly deals with getting ahead as a surgeon, while Lewis and Greene deal with, well, their never-quite-resolved attraction for each other.

Before he became Shameless, Macy led the emergency room as attending physician Dr. David Morganstern. His character, while only recurring on the show, would give Dr. Greene the advice that would be passed down to Dr. Carter and other chief residents throughout the series' 15 years: "You set the tone."

Patients Keep Hitting On The Doctors

While ER doesn't have Grey's Anatomy romance undertone, the ER pilot is filled with patients fancying the docs. A guy who fell on his face hits on Lewis, while a young girl awkwardly comes onto Greene while talking about her underwear. I guess even before Dr. Meredith Grey and Co. came along, hospitals were always a little frisky.

What Happened To Tracy Young?

In addition to Carter, another med student makes her debut in the pilot: Tracy Young, who is assigned to Ross and shuts down any friendliness he offers her (see video above, starting at 2:16). Ouch. No wonder she didn't make it past the first episode.

Margulies' first major TV role was as the ever-capable Head Nurse Hathaway on ER. The famous story is that the character surprisingly committed suicide in the pilot and wasn't supposed to survive, but that didn't test well with audiences, so the producers brought the character back. It's a good thing, too — if Hathaway had perished in the pilot, we would've never had the epic romance between her and Doug Ross, and Margulies may not have gone on to win her first Emmy.

In a way, her role as Carol Hathaway paved the way for her to become Queen of the Courtroom as Alicia Florrick on The Good Wife, where she has won more Emmys.

But it all started on a little (turned big) show called ER back in the 90s.