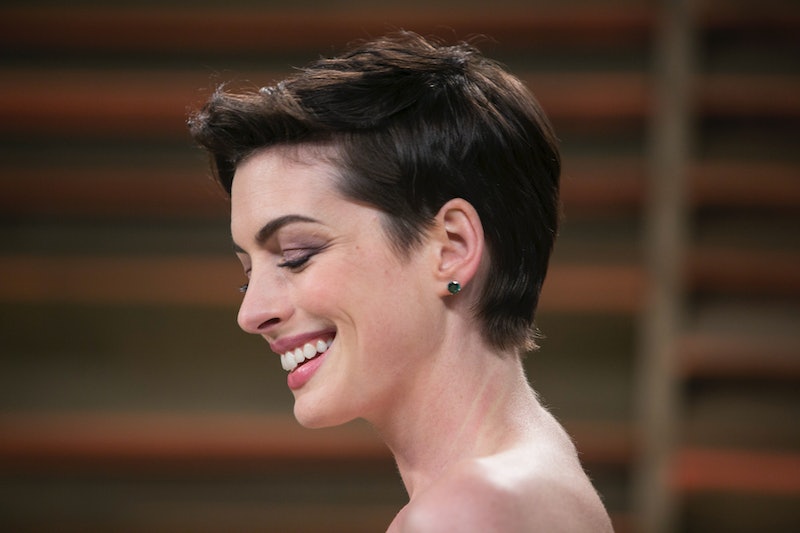 I've kept a fairly close-cropped 'do for about seven years now and you know what I hear most often from other women? "I WISH I could pull that off." And, seriously? It takes one easy step to "pull off" short hair: cut it off. It's not a horrible leap to take, even if for no other reason just to see what it's like firsthand. Spoiler: it's dope. There are simply things short-haired women don't have to worry about. A lot of things, actually.

Admittedly, I've been going through the slow process of growing out a pixie cut, but only because it's been a while since I knew anything else and change can be fun. Honestly, though, I don't know how much longer I'll have the patience for it. Summer is coming and frankly, that's the most ideal time for short hairstyles to shine as truly the most convenient, classy option. I recall when I first lobbed off the then-long mass of hair on my head: It was a windy afternoon in Jacksonville Beach, Fla. and when climbing into the driver's seat outside the record shop where I worked, I slammed a huge piece of hair in the car door. That was my final straw. Guess what? As little as I did with my long tresses, those tiny tasks DISAPPEARED from my life, along with some key stressors. Going short meant tress stress would largely be gone, for real. Here's some struggles short-haired women simply don't sweat:

Wind is the grandaddy of annoyances when it comes to hair. It has the capacity to totally rearrange a painstaking 'do without prior permission, namely. It also has the power to wreck your lipstick or any heavy gloss situation. Speaking of...

It getting stuck in your lip gloss

Any daring lip hues stay put (unless you're a mess with straws or whatever) since no long hairs threaten to drag it across your face like a very bad costume party get-up. Same goes for any extra shiny glosses or even normal lip balm. It all keeps still regardless of open car windows.

Paired with a quick toweling, it doesn't take shorter cuts longer than about 20 minutes to dry. Better yet, if you're traveling by car, roll down the window and "hang out" for a few beats. Use your fingers to fluff and style it in the wind as it dries. That also means we shorties probably get an extra scoop of shut-eye in the mornings since we don't have to consider dry time post-showering.

Spending tons of money on products

Sure, you can make products work on any length. I'm not arguing that (or the fact that I'm guilty of using some daily), but generally, less product is needed for less hair. That's just math. Math is hard usually, but not here.

Having a sweaty neck

OK, it isn't a bad idea for short-haired gals to shave their necks every so often (or ask a friend! Bonding opportunity, no question), but that's nothing compared to the constant exposure to passing breezes the style affords us. Oh, sorry—could you hear me beneath those long hairs? MY NECK FEELS GREAT.

While you scramble for a hair tie you're sure lives somewhere at the bottom of your purse, we're coolin'. During my long-haired stint, I even got so desperate that I occasionally used office rubber bands or molded paper clips to do the job. This kind of makeshift panic can seriously damage hair (not to mention the paper clip idea did not pan out in any definition of successful).

It's maddeningly fun to have the freedom to experiment on your locks without meditating too hard over it. Last summer, I let my stylist turn my hair aqua on a whim when she found extra dye. Because why not? My hair was so short it'd grow out in a few months if I decided I didn't like it. When there's less hair, it takes less longer to grow out. Meaning, it takes wayyy less time and therefore commitment to return back to absolute virgin hair.

Short hair means most of the stuff actually on your head is new growth. And new growth is baby soft as hell. Avoiding non-vital heat styling is good practice with all lengths, but with short hair, it grows out and gets chopped off more quickly so maintenance is as easy as trim. I actually forgot split ends existed until I found some on my cat's super long whiskers.

Winter is cruel to everyone but even if struck by a nasty blast of static electricity, short-haired women are less likely to resemble science experiments gone very wrong. The smoothing process to neutralize after exposure is far less intense.

Loose hairs have a habit of finding mouths even if the scalp attached to said mouth is totally bald. However, without a whip of long hairs flying around, it's way less likely you'll find yourself looking like a fool trying to remove 'em.

I have a comb, but it's more of a symbol than a tool. A symbol for hygiene, perhaps. I'm not entirely certain why I have it, actually.

I do have to make a quick nod to long-haired women's ability to hide beneath their coif so they may effectively go incognito. But assuming I'm the only weirdo trying to become invisible in public, we'll move along. People are gonna be more likely to hold eye contact with you if your own peepers aren't tucked beneath a big ole' mop. Less tress(es) give your features a chance to really shine.

No one seeing your cute jewelry

Rocking a bob demands adorable earrings to go with. Even the most blinged-out earrings tend to get lost in forests of hanging hair and that's an actual tragedy.

As if running weren't horrible enough, dodging your own sweat-soaked hair clumps adds a whole new obstacle. Pixies and bobs need just a couple of bobby pins and then you're treadmill-ready. (Or at least your hair is adequately secured. I can't say the same about your own personal feeling regarding exercise.)

Hair getting in the way during sexy times

Know what majorly gets in the way of a killer orgasm when riding on top? Your partner getting a mouthful of hair. Longer styles also hide your neck from all those neck kisses you deserve. Bobs make for easier access and less complicated sex things.

..Seriously, though, sex is important here.

If you're feeling nostalgia and pop into a missionary pose—or, OK, most any other pose—you present a major risk for bae planting a stabilizing palm smack dab on your splayed-out hairs. This is never not tremendously painful and also threatens to yank everyone out of the mood. Not an issue for us short-haird people.

OK I MEAN THIS SEX THING

Say you're ~pleasuring~ your partner as they lay on their back. When the final ~act~ approaches, long-haired girls gotta make snap decisions with how to proceed as to...not necessitate a serious shampoo job, IF YOU KNOW WHAT I'M SAYING. Crop topped women? We let the whim guide us.

Among my top three concert pet peeves is high-perched ponytails as they wave wildly about. You may not be aware how much extra space your hair takes as you dance like an insane person, but I guarantee everyone else within five feet does. With a more closely-cropped 'do, you can get your dance floor freak on without stressing over the very real possibility of whipping your immediate circumference with that coif.

Being nervous around fire

Even with bonfire season behind us, peak barbecue party seasons is quickly approaching. There will be open flames and if you've never smelled burned hair, you should quickly make a charity donation to better tip your karma. Also, if you're a smoker or have smoker friends: how? Short hairs warrant far less anxiety around all the pyrotechnics.

Especially with roommates. If you're the sole short-haired maven of the manor (or crampy apartment...I don't know your life, but that's usually more true for me, at least), you're probably free from the blame. And therefore, you're way more apt to be exempt from the horrific cleaning duties to remedy that.

You won't have to clear that clog, but the pool boys on duty will know who did it. (You. You did it.) Short-haired gals be all, oh whatev. The pool boy is super cool with us.

Bedhead on bobs is a whole new thing. Basically, it's an act in which our beds do all the (already minimal, but still) work for us. Another reason to catch your nightly Zs, I say. Or you could get up at the same time and use those saved minutes on a more worthwhile project, like breakfast burritos.

Basically, I urge you all to go short this summer. Just try it! You might like the freedom it affords you. Also, to be real: it's just hair. It will grow back. See you on the other side, future short-haired ladies.