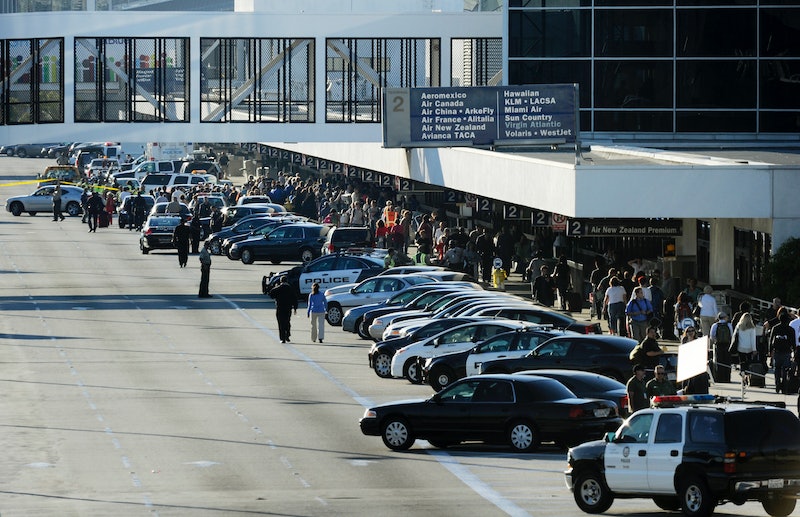 On Friday, Paul Ciancia allegedly went up to security checkpoint at Los Angeles International Airport, fired a .223-caliber assault rifle at a Transportation Security Agency officer at "point-blank range," killing him, went up an escalator in Terminal 3 and then came back down to shoot the officer again. The shooting spree injured two more TSA officers and two civilian bystanders. Ciancia, who is alive but unresponsive in hospital, has been charged with both murdering a federal officer and committing violence at an international airport.

The slain thirty-nine-year-old, Gerardo Hernandez, was a behavior-detection officer, whose job it was to identify suspicious activity and potential terrorists. He was also the first TSA officer to be killed in the line of duty since the agency was founded twelve years ago, in the aftermath of 9/11.

Ciancia, a 23-year-old graduate of a Roman Catholic high school in Delaware with no criminal history, remained hospitalized and unresponsive Saturday, making it impossible for the FBI to interview him. If he's convicted, Ciancia could face life in prison without parole, or even the death penalty, if the U.S. attorney general decides to push for the death sentence.

But even without an FBI interview, much has been revealed about the shooter's state of mind. According to Pennsville Police Chief Allen Cummings, earlier that same Friday, Ciancia's father had called authorities to help him find his son, after Ciancia junior had sent his sibling a text message about committing suicide.

And, according to FBI Special Agent in Charge David Bowdich, investigators discovered that Ciancia was carrying a one-page handwritten note detailing his intention to "kill multiple TSA" employees, calling them "pigs" and wanting to "instill fear into their traitorous minds." The note also reportedly rants about how Ciancia felt his constitutional rights were being violated by security searches, and was a "pissed-off patriot," angry at at former Department of Homeland Security Secretary Janet Napolitano.

He also reportedly claimed that the TSA treats U.S. citizens like terrorists, in spite of the fact that not everyone is equally dangerous.

Yah, you really proved them wrong, man who began a shooting spree at an airport.Friday was not the first time a gunman opened fire at LAX. In July of 2002, a limousine driver began shooting at the airport's El Al ticket counter, killing a bystander and an airline employee, before he was fatally shot by police. This time, however, LAX and LAPD personnel had recently prepared for just such a crisis, with 200 employees undertaking a training excercise at an abandoned terminal at Ontario International Airport as recently as last month, spurred on by the recent mass shootings in Washington's Navy Yard. "It doesn't take much to want to handle an incident if it occurs in your own backyard,'' LAX Police Chief Patrick said.