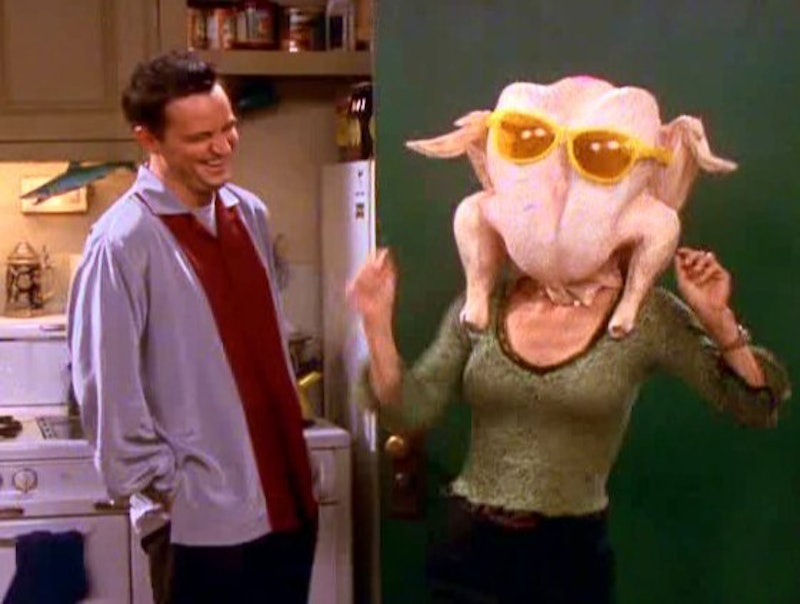 Friends is, without a doubt, one of the best sitcoms ever made, hands down. While it may have been off the air for 11 years already — seriously, we are getting old, y'all! — it still holds its own as one of the funniest and most relatable shows out there and is still making new generations of fans laugh and cry with its effortless and natural humor. But one of the most amazing and underappreciated aspects of Friends , however, was its food. I bet you never even thought about "Friends food" as its own category and, now that you are, you're kinda like, "Oh, yeah! There were some pretty hysterical food moments on that show!" Right you are!

Over the years, Monica, Chandler, Joey, Phoebe, Rachel and Ross have each had their own special moments with food, for better or worse. After all, Monica was a professional chef, Joey "doesn't share food", Phoebe's grandmother had a secret recipe for the BEST chocolate chip cookies ever, and so on and so forth. What I'm trying to say is, Friends had a lot of amazing moments when it came to food, and since I love both food AND Friends, I thought it was high time we celebrate some of the best.

Rachel puts beef in the trifle

Poor Rachel. She thought she was really branching out by preparing a traditional English trifle for Thanksgiving dinner, but it turns out two of the pages got stuck together and she accidentally put beef in the dessert. Of course, Joey still ate it, so I guess not all was lost?

Phoebe was devastated when she realized she lost her grandmother's prized chocolate chip cookie recipe. After all, Nestlay Toulouse was a brilliant baker! This moment of classic ditziness is a Phoebe classic and one of the reasons you've just got to love her.

After mistakenly receiving a cheesecake delivery, Chandler and Rachel become totally obsessed with it (because who doesn't love cheesecake?) and continue to steal the replacements to feed their addiction. Things get to a real low point before they finally pull themselves together. But hey, I bet we all have a food we love so much, we'd eat it off the floor, right?

Monica makes candy for the neighbors

Monica tries to endear herself to the neighbors by making candy at home, and it seems to work a little TOO well. A frenzy ensues and things get a little out of hand. I mean, I love candy as much as the next person, but these people seem a bit too intense. I mean, maybe if they were salted caramels...

This is perhaps the most infamous Friends food moment EVER, and for good reason. Ross lives for Thanksgiving leftover sandwiches like his mom used to make, so when one of his colleagues takes his last one, it goes DOWN, leaving Ross medicated and "on a break" from his job...

Monica wears a turkey on her head

Wait, maybe THIS is the best-known Friends food moment. Monica dancing for Chandler with a turkey on her head is a classic, especially since it leads to Chandler saying "I love you" (and then quickly taking it back) for the first time.

Joey protects a sandwich on a ridealong

Phoebe's cop boyfriend takes Joey and Ross on a ridealong and when shots ring out, Joey throws himself over Ross. Ross is touched, thinking Joey save his life, but Joey was really only doing it to protect the sandwiches they'd bought. Classic Joey.