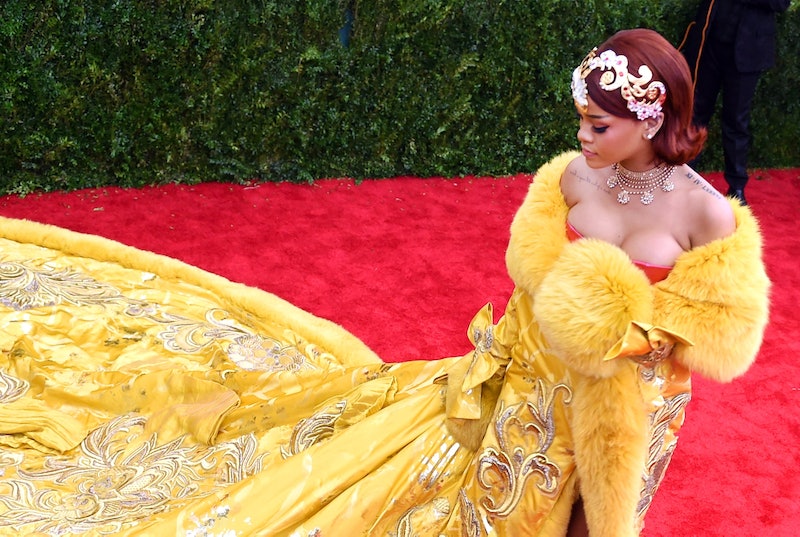 Well folks, Rihanna’s Met Gala dress was as big of a deal as I predicted, though not quite to my specifications. Interestingly enough, there was a whole lot more dress to be seen than there was Rihanna, but memes circulating the internet ignored the fact that the gown devoured our pop princess, instead choosing to focus on the pizza pies and scrambled eggs the golden train resembled. Thankfully, Chinese haute couture designer Guo Pei thought the Rihanna Met Gala memes were funny.

As some of the Met Gala's Chinese-themed outfits were a little out there or a bit offensive, I wondered if, although we had our fair share of laughs at the expense of some of the outfits, would designers be equally as humored by the Fashion Police of Cyber Space? Well, I have my answer! According to an interview with The Cut, Pei thought the memes were "really cute!"

At an exclusive dinner hosted by MAC Cosmetics on Tuesday, Pei explains that Rihanna came across the gown online and had not hesitated to contact her, interested in an original piece from the royalty-inspired collection A Thousand and Two Nights. The dress, which took two years to make and weighed in at a whopping 55 pounds, is “very important” and if humor is how it gets noticed, Pei says that’s great, especially when you take into consideration that “Rihanna is wearing this dress for entertainment — not for a fashion show.”

Entertaining, indeed. Though, one member Met Gala viewer was #notimpressed as Rihanna clearly stole their thunder.